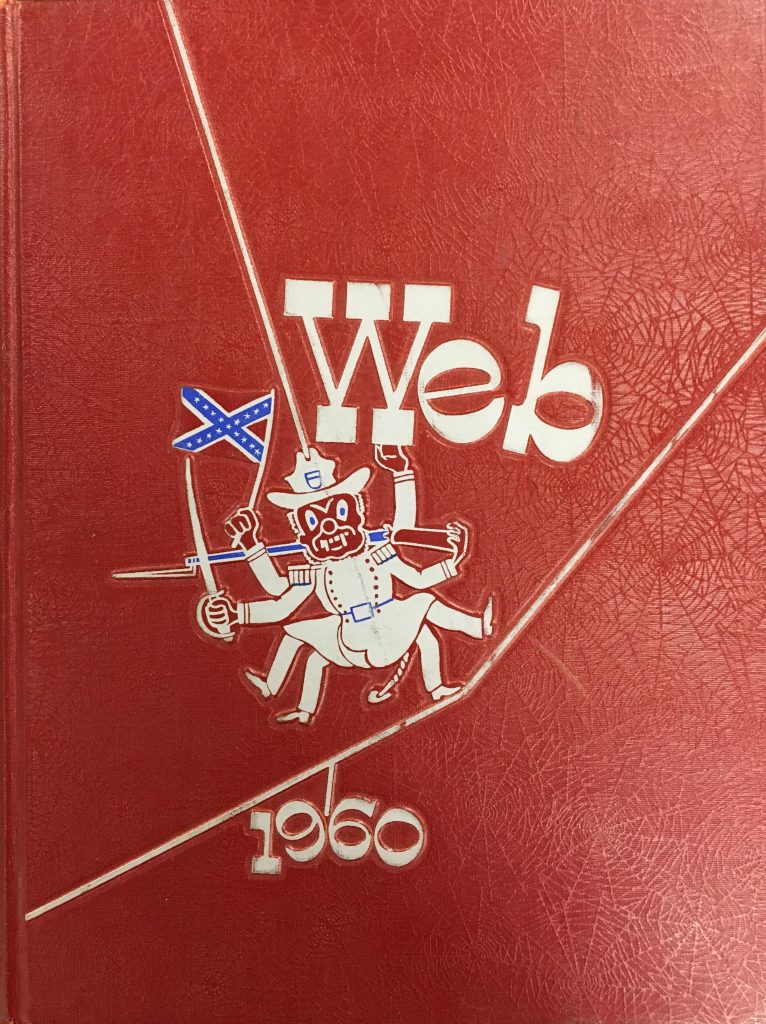 For my first week of research, I decided to go through The Web yearbooks from the 1960s and early 1970s to get a better idea of what the University was like before, during, and after integration and the Civil Rights Act of 1964. One of the things that immediately stood out to me were the themes of the yearbooks. The very first yearbook I looked at was from 1960 and it featured Confederate Spidey, the unofficial mascot from around 1950 to 1970 of a spider dressed in a Confederate uniform and holding a Confederate flag, on both the cover of the yearbook and on nearly every single page. The noise of whiteness, racism, and Lost Cause ideology can overwhelm the voices of others. Whether it is the playing of the Confederate song “Dixie” at University events, the large number of Confederate flags documented in yearbook photographs at Greek lodges, sporting events, and Rat Week, or the yearbook photos containing racist imagery such as nooses and blackface, black students faced several obstacles in areas of student life at the University of Richmond. The Confederate flags and the song “Dixie” were a symbol of the Old South, celebration, and pride for white students, but for black students it was a symbol of the horrors of enslavement and racism. 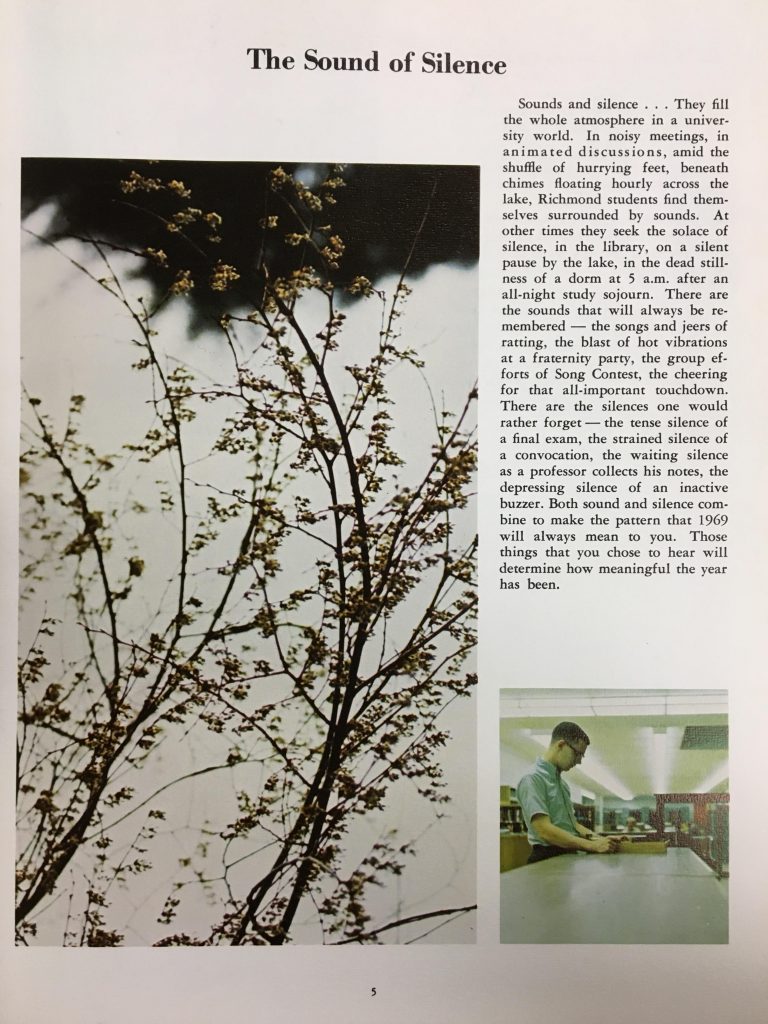 The Web 1969 yearbook had the theme of “the sound of silence.” Although the silence described in the yearbook spread is the silence found in the library, by the lake, or in the early morning after a late-night study session, this theme of silence can also be seen in the silence of the voices of marginalized people in the pages of the yearbook. One page from the yearbook quotes the lyrics “People talking without speaking. People hearing without listening” from the Simon & Garfunkel song “The Sound of Silence.” The yearbook applies these lyrics to students learning to both hear and listen in a world where communication often turns out to be one-way. These lyrics parallel the inability and unwillingness of dominant voices to communicate with marginalized voices or allow marginalized voices to speak. The Simon & Garfunkel song continues with the lyrics “no one dared disturb the sound of silence” and “silence like a caner grows.” The silence of oppression and alienation of marginalized people are a result of the desire for continued comfort and affluence of the dominant group. These silences must be disturbed through archival activism and the creation of a more representative history. 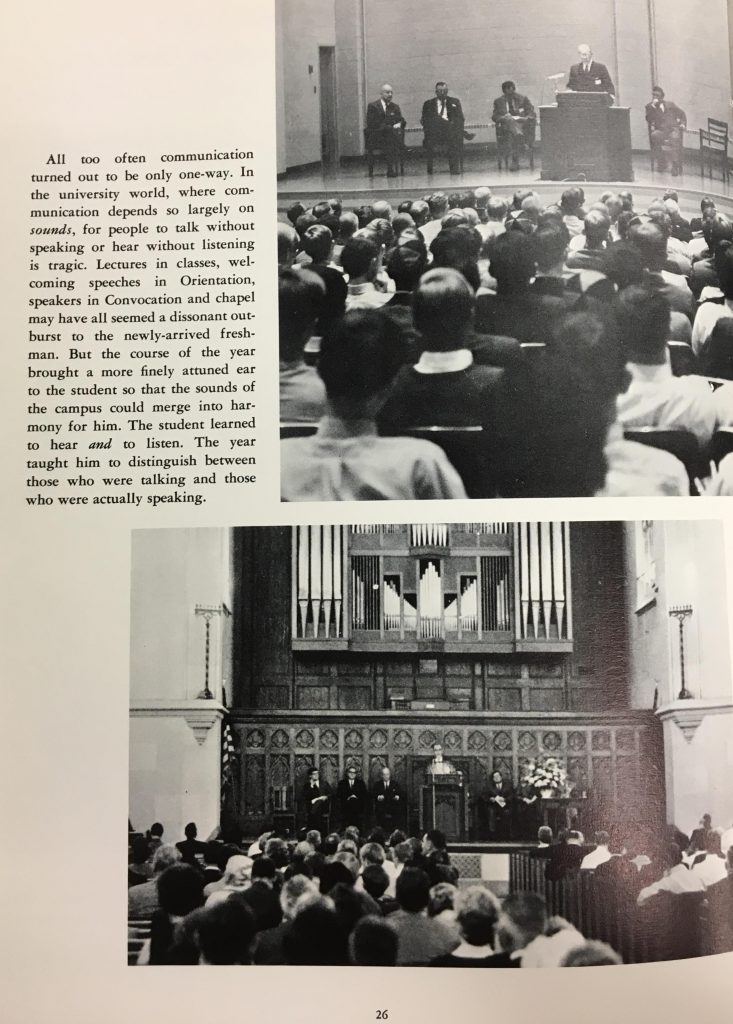 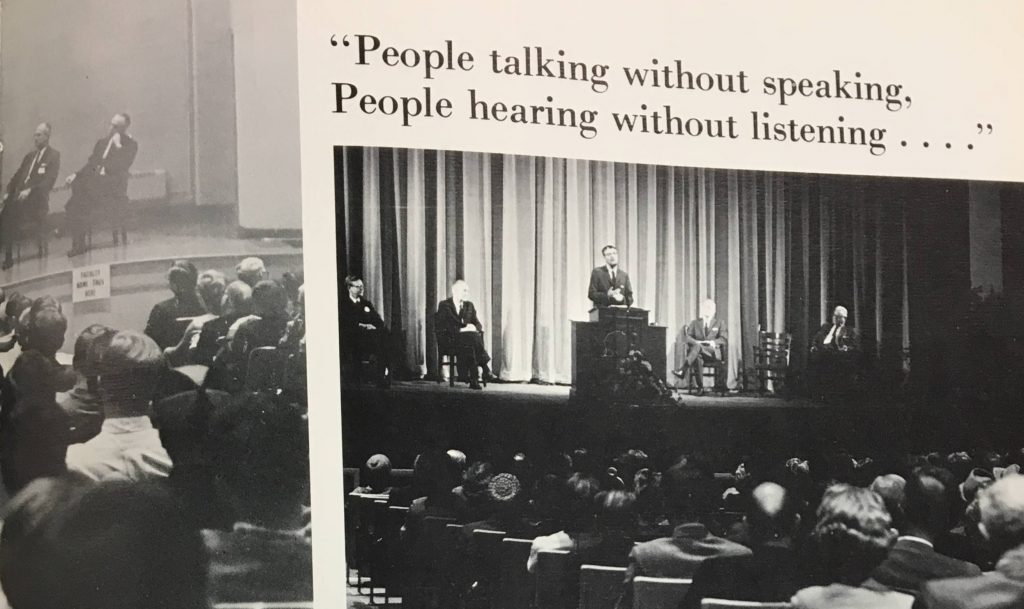 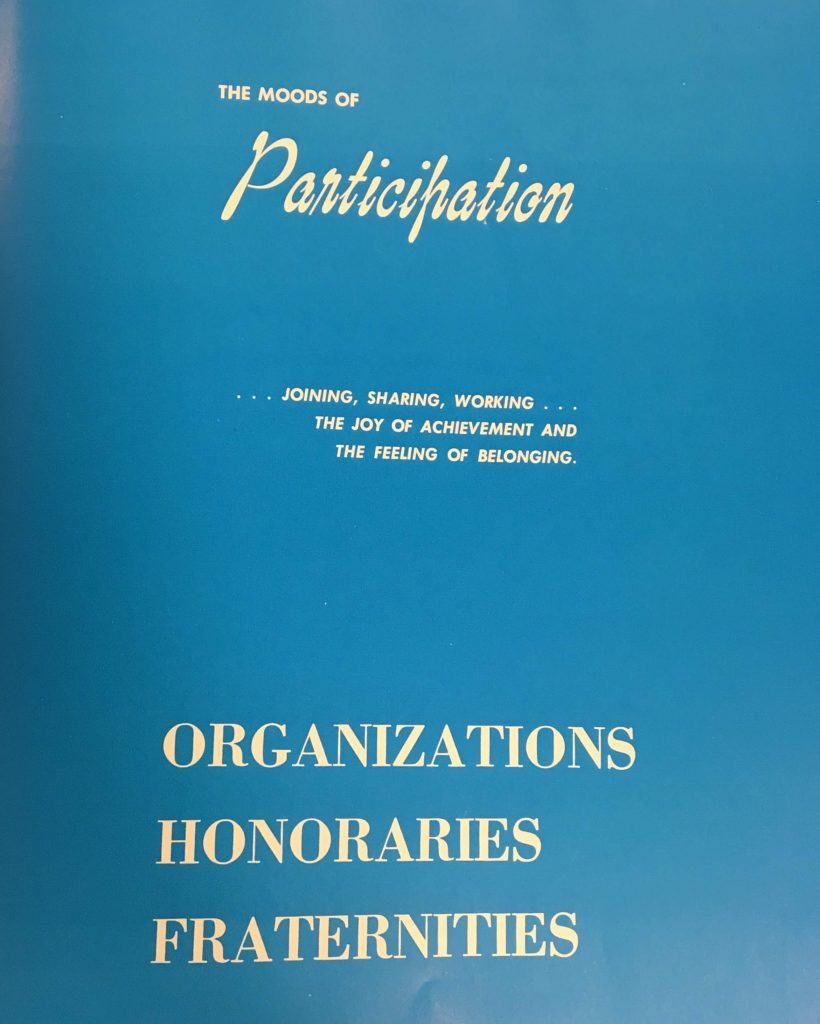 The theme for The Web 1962 was moods, and in particular the moods of participation and determination stood out to me. The yearbook page spread defines the moods of participation as “…joining, sharing, working…the joy of achievement and the feeling of belonging.” The moods of determination as “…devotion to work…perseverance…desire for achievement…and finally, the attainment of the goal.” Although the University was initially reluctant to comply with the Civil Rights Act of 1964, the first black students arrived on the main campus in 1968. Minorities at the University were clearly outsiders who demonstrated self-determination and resistance in spite of a non-inclusive community. The strength of marginalized students attending a campus where they could not always experience “the feeling of belonging” through participation is found in their self-determination to succeed despite the obstacles they faced. Whether it is Isabelle Thomas’ involvement in the Westhampton College Glee Club or Barry Greene’s involvement in Zeta Beta Tau, the first black students paved a way for future students and found spaces where they could express themselves. 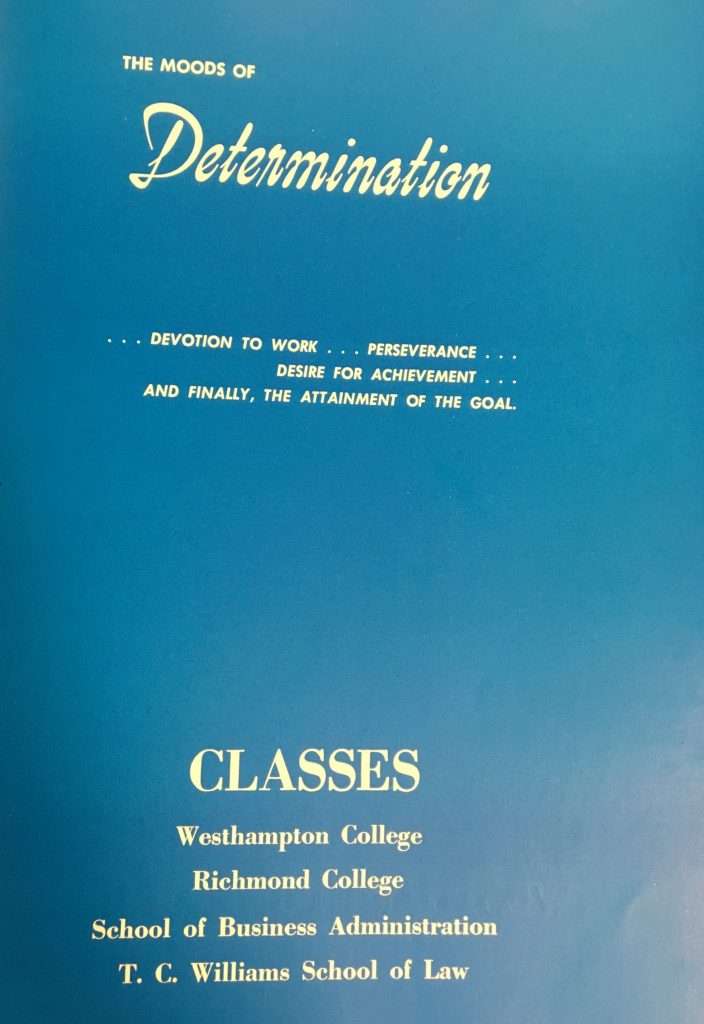 Although it can be discouraging to see the lack of inclusivity and the blatant racism of this decade in the yearbooks, there is value in reading the existing archives against the grain and creating new archives through the Race & Racism Project, in which racism and Lost Cause ideology can be called out and a more representative history can be created. A question that I kept in mind when looking through the yearbooks is whose memory is being constructed and whose is being erased? Each photograph found and documented into the archive creates a mosaic of collective memory and shared experience that has greater authority when assembled together rather than on its own. How we remember the past impacts the present and the future as the University of Richmond and its students conceptualize what the future should look like and whose voices we should listen to. Archival work and activism can work together to create a more socially just future for the University of Richmond.

One thought on “Reading Against the Grain: Themes of Participation, Self-Determination, and Silence”