When I joined the Race & Racism Project, I was not quite sure what to expect. I knew there was going to be an oral history piece where we interview black alumni and it was this that excited me the most. I knew that in previous summers and classes, the bulk of the work within the project had been archival work to uncover and identify the racial history of the University of Richmond and the city itself. I also knew that that was not so much my cup of tea. Being out in the social word, talking, listening, eavesdropping, and interacting with people–these are my more refined skills. But of course an interview is only as good as its interviewer. Oral histories require in-depth knowledge of the interviewees, and you find much of this information by looking through the archives and historical records. However, what makes oral histories different is the fact that you’re hearing said person’s story from their perspective. Some might say autobiographies do the same, but there are at least three crucial differences: 1.) Not everyone likes to read, 2.) You can listen to an interview faster than you can read it, and most importantly in my opinion, 3.) You can better understand and grasp the essence of a story and history through word of mouth as opposed to words on a page. That all said, conducting interviews and producing oral histories can be more difficult than your “standard” archival work because of the fact that you must find a means of contacting those you wish to interview. And you can’t just reach out without any idea of who you’re talking to either. I quickly came to learn that the research done prior to the interview is just as important as setting up and conducting the interview itself.

When it came time to start researching, I had a few starting places: I delved into the University of Richmond’s online Collegian archive, the Race & Racism Project website (memory.richmond.edu), and the blog site that you, the reader, are currently reading from. My goal was to find two individuals, Marilyn Branch-Mitchell (’78) and Greg Mitchell (’76**), both of whom I will be interviewing together in the near future. I soon realized sifting and searching through subject heading after subject heading in the Collegian archive was neither the most efficient method of inquiry nor did it guarantee me coming across either of their names. I next resorted to the project website in hopes that some more “detailed” or targeted search entries might lead me to them… But still nothing. I did come across Mrs. Branch-Mitchell who was in multiple Student Organization for Black Awareness (SOBA—comparable to our Black Student Alliance today) yearbook photographs, however. It was at that moment that I realized if I wanted to find even the most basic of information about my future interviewees (e.g. what clubs, organizations, or extracurricular activities they were involved with, what campus events they partook in, or possibly even what they majored in), the yearbooks are perhaps the best archive resource for finding this. 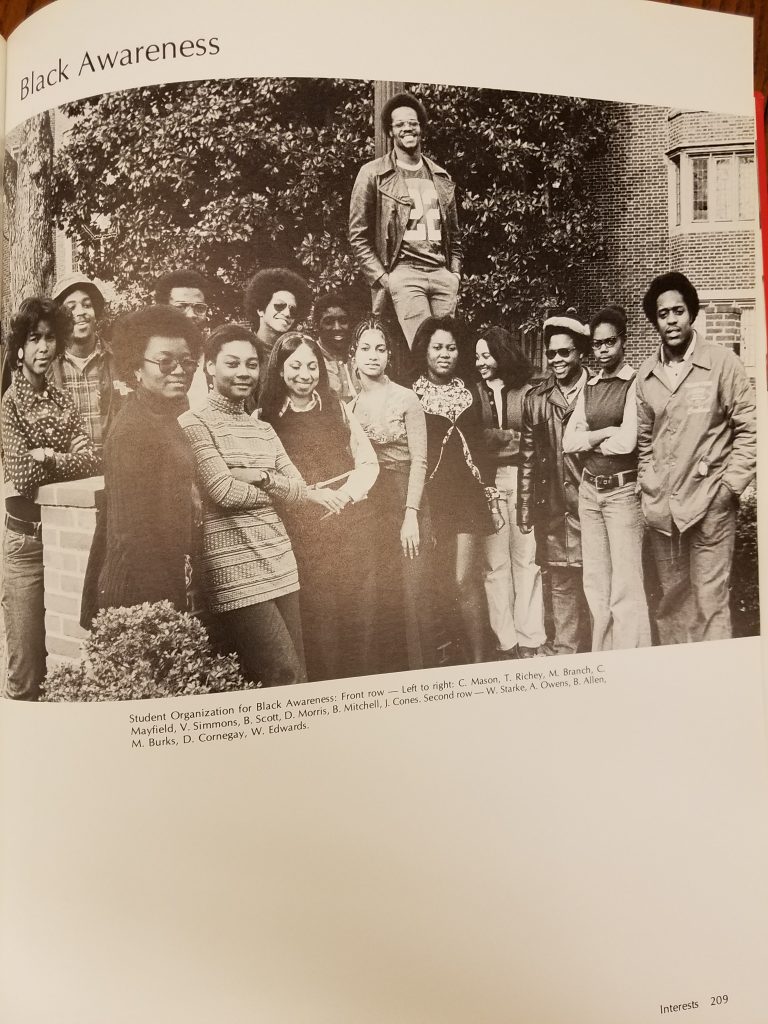 So I looked at years 1972-1973 to 1977-1978 in search of the Mitchells. In each of her respective years, I found Mrs. Branch-Mitchell pleasantly smiling all the same; however, in none of his (supposed) respective years did I find a photograph or even a mention of Mr. Greg Mitchell’s name, and this upset me. I still don’t know if I was frustrated or disappointed, but I do know that I’m curious. Through word of mouth and actually a direct message from Mrs. Branch-Mitchell herself, I knew that Mr. Mitchell was on the football team. However, only two of the yearbooks I searched had a team picture, and one of those two provided a roster alongside it to correlate names to faces—Mr. Mitchell’s name was not present. Now, I don’t know whether it was because the editors of The Web (the University yearbook) were too lazy to include the football team player’s names (since it is the biggest ‘group’ on many college campuses) or if there was some underlying contempt, but every other sport and almost all other clubs, and organizations had rosters and names listed by their respective photographs. I was perplexed, but fortunately I learned I was looking in the wrong places.

In this day and age, we have a thing called the internet, and on the internet is Facebook. I was able to find both Mr. and Mrs. Mitchell on Facebook through the University of Richmond Black Alumni Network (URBAN) page, and I messaged both of them. It was at that point that I confirmed some basic information with Mrs. Branch-Mitchell, and proceeded to schedule a pre-interview phone call to learn as much of the “basic information” that I might need to best assist me in conducting a successful, efficient, informative interview. During this pre-interview I learned that Mr. Greg Mitchell was in fact class of 1980** (note the asterisks by the ’76 classification earlier in this post), something I would not have known until our true interview had I not reached out. Pre-interviews are another form of archival research; you’re simply hearing directly from the source prior to again hearing directly from the source. But as I mentioned, it is important to know enough, not necessarily everything but enough, about your interviewee in order to garner a rapport and have the best ease of conversation so that you all can get the most out of the interview.

I learned that Mr. Mitchell “was not a big picture guy,” at least that’s according to him. This could be reason for his exclusion from his class photographs and SOBA, but it still doesn’t explain the lack of team football photos and roster listings. I wonder if he chose not to partake in photographs because he knew he was a “unique” University of Richmond student of that time (a large, black football player) and his likeness could have been used in all sorts of ways without his discretion had he been pictured. Nonetheless, I look forward to learning more about the both of them: how they came together, what their times were like on campus before they met each other, what Mrs. Branch-Mitchell’s experiences were like as a sociology major, what Mr. Mitchell’s experience was like on the football team, and more into depth about his reasons for not being photographed. One thing is for sure, I do not fear that there will be a shortage of things to talk about, but until it’s time for the official interview to finally take place, I will continue my search for answers in the archives. Stay tuned for podcast edits of these interviews to be posted to the project site in the Fall of 2018.