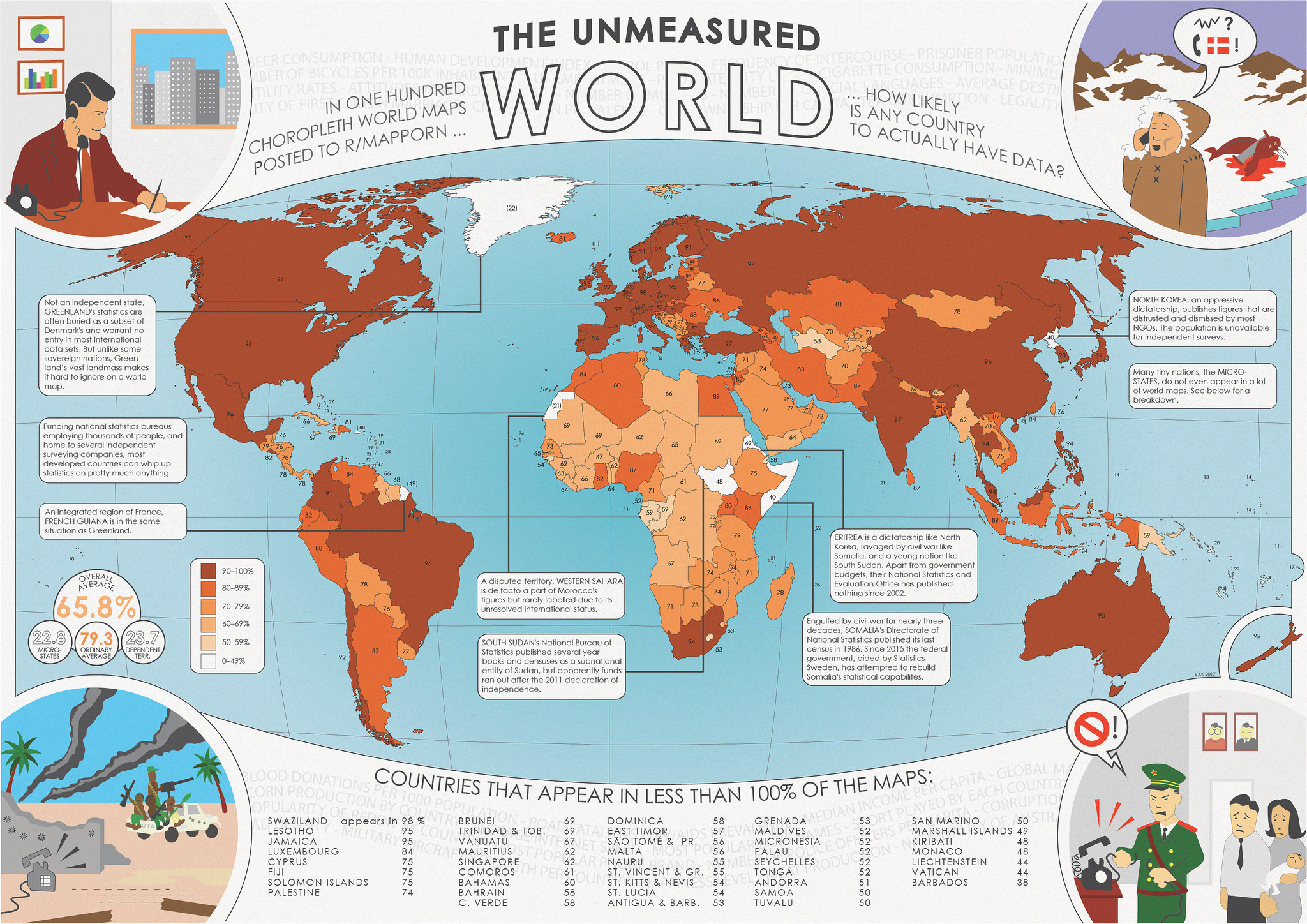 The prize-winning, map of the month, “The Unmeasured World” is a map generated using other maps. The mapmaker dug through one hundred choropleth world maps posted on Reddit in order to win this map competition. They collected data on how often world countries contribute data to various types of maps on Reddit. A choropleth map is one that uses colors, shades, or patterns to display the proportions of a statistic for a certain area. It is meta that this choropleth map was made using other choropleth maps. This mapmaker analyzed data from other maps to create a new set of data for their own map. In the background above and below the actual world map on this graphic, many of these choropleth maps are named in very light text. These words are easy to miss, but the following are some of the Reddit choropleth maps used: “Cigarette consumption,” “frequency of intercourse,” “number of bicycles per 100k inhabitants,” “number of official languages,” “blood donations per 1000 population,” and “median income per capita.” All these Reddit maps are filled with data on countries, but often, some countries are left blank. “The Unmeasured World” is a choropleth map showing the distributions of posted data to Reddit by country.

“The Unmeasured World” shows that many countries do not contribute data to the Reddit maps. There are many reasons a country may not have data on a map. For example, Greenland, Western Sahara, and North Korea all were data-less in over fifty percent of Reddit maps, but all for different reasons as explained within the white text boxes covering the oceans. Greenland is not an independent state, so its data is embedded within Denmark, Western Sahara is a disputed territory, so they do not have official statistics, and North Korea’s statistics are discarded by most non-governmental organizations. Most of the world’s leading global powers score in the high nineties, as they consistently conduct reliable censuses, and have other ways of gathering massive amounts of data. Developing countries will not prioritize the conduction of censuses with their money and time, when they have to focus on more pressing issues, such as poverty, lack of clean drinking water, and education.

The beauty of choropleth maps is it is easy to see trends in the data. Europe and North America are both covered in maroon (90%-100%), with many of the other countries in the orange and yellow (70%-90%), while only one of Africa’s fifty-four countries had data in more than ninety of maps (South Africa). The majority of Africa is covered in the orange colors that represent around sixty to eighty percent. This gives information on the governments and status of African countries, and how they struggle for one reason or another to have data in many categories. It can be problematic to assume that these data holes are always developing countries as it can lead to inaccurate conclusions about the state of the country.

In addition, each of these one hundred choropleth maps came from Reddit, either created by a Reddit user or pulled in from somewhere else. People who use the open platform, Reddit, have access to a computer and the internet which suggests they are in developed countries. The target audience with these maps is also individuals in developed countries. Reddit is not a professional or reliable source. Users of Reddit can post anything they want, and it may be difficult to judge their biases and motivations.

Below the world map, a list of all the countries that appear in less than 100% of the maps is shown. Many of the choropleth maps used have no data on certain countries, but those countries still appear on the maps. For example, Greenland only had data in twenty-two maps, but it still was shown in every single one, thanks to its size. Numerous countries that are commonly left off maps are small islands in either the Caribbean or Oceana, so naturally, without being included on many maps, they score low in data. Even when included in maps, these countries score poorly in how often they have data, with many of them having data in less than twenty-five percent of maps, despite all countries appearing in at least thirty-eight percent.

On the far left, the overall average is given, at 65.8 percent. In general, higher populated countries had data in a larger percentage of maps. It would’ve been interesting to see a weighted average using the population of countries. I think the weighted average by population would be significantly higher than the average posted on this map. The average for micro-states is 22.8 percent, although what criteria define ‘micro-states’ are not given. “Micro-states” generally means countries with a small landmass and small population, but it is unclear what this map used to determine how small, small actually is. It makes sense that these countries don’t have much data, as many of these were countries that didn’t even appear on every map. The dependent territories, like Greenland and French Guiana, had an average of 23.7 percent. This statistic is not surprising either considering their data is buried as a subset of the country they are connected to. This map provides an “Ordinary Average” of 79.3 percent, but what the “Ordinary Average” refers to is not defined. It could possibly be all the countries that are not micro-states, but I would guess that number would be lower than approximately eighty. So it is unknown what qualifies the countries as ordinary. I would say this graphic of statistics is a flaw of this map, leaving out what these statistics actually represent.

Some bias in “The Unmeasured World” comes from the choice of choropleth maps analyzed. The mapmaker chose which maps out of the thousands on Reddit to include in their work. Some maps may provide more information less common to developed countries. For example, two of the choropleth maps used to create “The Unmeasured World” are “infant mortality” and “number of bicycles per 100k inhabitants.” Infant mortality is a statistic that most countries will have data on, as it’s likely the United Nations or another world organization collects this information. On the other side, it’s unlikely that developing countries will have data on the number of bicycles per 100k inhabitants.

Another interesting aspect of this map is the four pictures at the corners. Although it might not be clear at first glance, the four pictures in the corner are all connected. It starts with the top left, where a man in a suit sits in an office ready to write something down. The charts on the wall let us infer he is gathering data for a choropleth map. In his hand, he is calling on the phone. In the other three pictures, different countries are shown for reasons why their data is not reaching the caller in the first picture. The top right picture is depicting Greenland. The man is saying to call Denmark for the statistics. The bottom right picture shows North Korea, which is clear by the uniform the soldier is wearing. He has cut the telephone wire showing how North Korea is an oppressive dictatorship that controls its citizens while cutting off communication to the outside world. The bottom left picture is unclear what country it is illustrating, although it might not be supposed to be a specific country. A text box on the map discusses how Somalia has been stuck in a civil war for almost thirty years, so the picture may be showing Somalia’s conflict and therefore how it’s ignoring the phone. But the picture may also be French Guiana, Eritrea, or one of the Caribbean islands. The back of the truck reads “OTA” but that didn’t lead me to any specific country. Please respond to this post if you think you know which country it is supposed to be. All these pictures exhibit stereotypes about countries that the mapmaker chose to include. This map has a lot going on and can be overwhelming at first glance, but with loads of interesting information, this map has a great story to tell.

1 Response to The Unmeasured World