The 10 Fastest Growing & Declining Airports in the U.S.

Posted on September 24, 2021 by Brenden Schildkraut 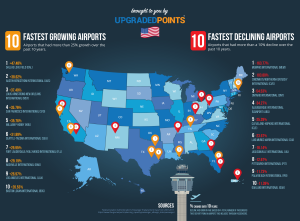 The map representing the top 10 fastest growing airports, and the top 10 fastest declining airports in the United States, is a fairly basic map. It is easy for the average viewer to interpret the map and recite the main points of it, as on either side of the map there is a bulleted list either representing the category growing or declining. These lists are clearly labeled 1-10 and give the name of the airport and its location with either the percentage the airport has grown in passenger traffic or the percentage it has decreased in passenger traffic. For example, Dallas Love Field airport in Dallas, Texas is number one on the fastest-growing list, and it has grown 90.39% over the 10 years. The information from the lists is then taken and pinpointed on the map of the United States for where that airport is located. The map makes it clear that airports that grew are represented by an orange pin on the map, whereas airports that decreased are represented by a red pin.

While looking at the map, something I found to be interesting has to deal with the location of the airports. The majority of the locations of the airports that are decreasing are further away from the coast and more inland in the United States. This is compared to the growing airports which are mainly cities in states that aren’t deadlocked. Based on this observation and further observing the map one could infer where trends of Americans are traveling and which cities are most popular. Destinations such as Austin, Texas, and Nashville, Tennessee are perfect examples of popular destinations that are on the growth list. These cities have gained large popularity for people to move to and visit. As effective as the map is in telling the story of US airports, a critique that I have, which is a major silence of the map, is that the map offers no explanation as to why the specific airports made their respective categories, and leave the viewer to infer on their own. I believe that the map can include a brief sentence or two below each airport to explain,which will strengthen the overall map. These sentences may include reasonings such as an airline hub was relocated here or moved from here showing its increase or decrease. In addition, another possible reason could be that the airport is either newly renovated or needs major renovations causing it to decline.

In 1978 President Jimmy Carter introduced the airline deregulation act which offers an explanation to the major silence of this map. Before this act, the airline industry was heavily regulated by the Civil Aeronautics Board(CAB). The CAB controlled where flights can fly to and from for each airport, along with what the price was for the ticket is allowed to be, and much more. In addition, before 1978 the airline industry was monopolized by a few players, but the new law promoted more startup airlines into the business.This gave way to new players in the market who operated out of new hubs. Airline hubs also mark a major player in the increase and decrease of airports as before 1978 hubs didn’t exist. For example American airlines up until 1978 operated flights to 36 destinations, after 1978 it created a large hub at the Dallas airport in which it operates flights to over 100 different destinations from Dallas. With the deregulation of the airline industry, we’ve also seen more competition between the airlines which has a direct impact on the map. Airlines want to move their hubs to the hottest markets and even the markets of their opponents to try and steer profits away from opponents. (Singh)

Provided the proper background information to the map, along with a brief explanation included on the map, the map will be stronger than it already is. Though the average viewer can already infer the main points of the map, there is still a whole story to be told of this fascinating industry that the map silences. The airline industry will indeed continue to be the most popular method of long-distance travel in the United States for years to come. It’ll be intriguing to see the differences on the map during the next 10 years, as this industry is always evolving for the better.

3 Responses to The 10 Fastest Growing & Declining Airports in the U.S.