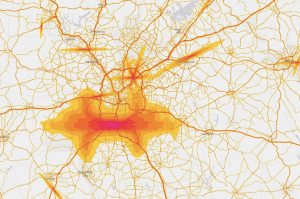 Have you ever spent the night in a big city and the sounds of traffic kept you up at night? In 2019, Atlanta, Georgia ranked number ten in a list of cities in the United States with the worst traffic congestion. This map, from the US Department of transportation documents the amount of noise due to traffic in the city of Atlanta. This map encapsulates the sound from cars, trains, and planes. As a major city, it is pretty predictable that Atlanta would host a fair amount of traffic. Atlanta hosts a population of 488,800 so it is not all that surprising that a lot of drivers would be on the highways in Atlanta daily.

This map from the United States Department of Transportation is a pretty basic map. It outlines the major roadways around Atlanta and labels the names of surrounding towns. The areas with the highest noise levels are highlighted in red. As the noise lessens in certain areas the colors fade to orange and then to yellow. This particular map has no legend, so the viewer is left to assume general noise levels based on the colors used in the map. From this map, the viewer can easily assume that noise levels in Atlanta are high due to the large amounts of red highlighting in the city and its surrounding areas. This is not surprising due to the fact that Atlanta is a cosmopolitan city with a midsized population. However, this map does not offer any explanation as to why Atlanta has such large noise levels due to traffic. I believe this is a huge silence of this map.

Traffic in Atlanta has a surprisingly large amount to do with the history of segregation in the city. During much of the nation’s history, the attempts to separate the races are inescapably “spatial” in addition to the socio-political and economic segregation that is so familiar in American history. In fact, the spatial and social aspects of segregation are intertwined. This pattern is very true for the city of Atlanta. During the New Deal, federal agencies pushed Black Americans into ghettos by labeling neighborhoods as risky investments or good investments. This would lead banks to only distribute loans to people living in neighborhoods that were labeled as good investments. Therefore, people who lived in the “risky” neighborhoods, often Black people, would not be able to take out a loan and could not advance their living situations. This practice is called redlining. Redlining led to the creation of very distinct and segregated neighborhoods. During the 1950s and 1960s, the federal government funded the creation of a new interstate highway. While the federal government funded the large majority of this major project, local governments had most of the say in how the highways were laid out in each state. In Atlanta, these highways were placed on routes that would lead to the destruction of the “riskier” Black neighborhoods. This was a common practice in other Southern cities like Richmond, Nashville, and New Orleans. Not only were these major highways used to destroy minority neighborhoods, but they were also created as a physical barrier between white and minority neighborhoods. This trend can be seen in cities across the East Coast.

If you follow the paths of major highways in these cities, you can see the stark division between neighborhoods. By following the path of these highways, you can also see that they often do not follow a very direct path. This is due to the intentional, racist layout of many major highways. The circuitous routes that city planners designed for these major highways now cause major traffic jams in big cities. By looking at this map of traffic sounds in Atlanta, we can clearly see that the city is full of traffic. However, this map doesn’t give any historical context as to why traffic in Atlanta is so heavy. The map is also not detailed enough, for the viewer to be able to see the pattern in traffic sounds without any prior knowledge. Although the viewer can see that the city of Atlanta has a high volume of traffic sounds, the viewer cannot see which neighborhoods are specifically impacted. I believe this lack of historical context to be a large silence of this map from the United States Department of Transportation.

Given the proper historical context, this map has the potential to be interesting and meaningful. But, given the way this map is presented right now, it would be fairly meaningless to the average viewer. This map from the Department of Transportation is silencing a very important, and often overlooked, piece of American history. The map of noise due to traffic in the city of Atlanta, Georgia has the chance to be powerful, but the creators of the map have silenced a large part of its power.