The Price of a Beer Around the World 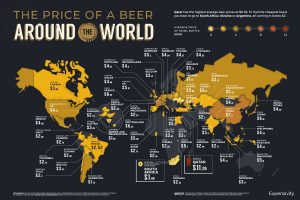 With this map made as up to date as February 2021, there’s not much that would have changed from then to now. This map consists of the average price of a beer in each country. All of the prices are converted to U.S. dollars to be able to make all of the prices comparable to each other. This map was posted in the food and drink category on a travel website emphasizing the differences across the globe of something as simple as a beer.

Looking at the map the most eye-catching part of the map has to be the color scheme they used to speak for their data. They use the scale from the least price being a light yellow color and then as the average price goes up the darker the yellow gets until it is turned into a red which displays the countries with the highest average price. The map also presents the readers with a scale to show the difference between the prices and colors. This scale also labels the color with a price so it can be seen when looking at the map of the world. One thing that is interesting is that in the map the colors around each other are usually alike. If there are a group of countries near each other they will have a similar color because of the way that they price their beer. Sadly there wasn’t information received from every country and going along with color all of those countries that there are no numbers for are discolored.

When traveling many people will indulge themselves in an iced cold beer if it’s on vacation, meeting up with friends, or maybe even meeting up for work. These trips could be changed based on the amount of money people will have to spend when they are there. The map could even explain where certain places around the world are more expensive to live. While looking at the map I can see a trend with the prices. It appears that the countries in the northern hemisphere tend to have a higher average price per beer while the countries in the southern hemisphere have much lower prices and looking at the map have all the lighter colors. It is also interesting to see that the quality of beer doesn’t have to do with the cost across the globe. Also there is probably a much higher rate of consumption in some countries rather than others. This could lead to a beer being cheaper because the demand for them would be higher. This should also be our “Map of the Week” because it is cool to see the differences between certain countries. Looking at the map I was surprised to see that some countries like Qatar have an average price that is at least two times higher than the price of a beer here in the United States.

Maps are made by creators, and those creators are doing this to have people believe in the completeness of the information and sometimes even to persuade. In this case here the creator made this map to relay information to the typical person about information that they have found. This information could be used by all types of people for all different reasons. If it has to do with vacation one could look at this to determine where they might be able to find a cheaper place to go where they can enjoy cheaper drinks that won’t hurt their pockets. We talk in class about how maps can speak to the readers and this map talks to the people in a way to avoid the places where it is so expensive and makes the cheaper places look lighter in color and more inviting. Even on the map it displays a sentence and it states, “To find the cheapest beers you have to go to South Africa.” This sentence is emphasizing the idea to go to South Africa where you can find cheap beers. The best part about this map is that no matter how much it cost people of age can always sit down and enjoy the beer of their choice.

5 Responses to The Price of a Beer Around the World