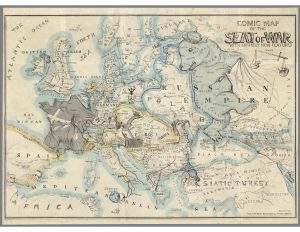 In 1854, Thomas Onwhyn brilliantly brought the caricatures of European nations to life on the Comic Map of the Seat of War with Entirely New Features. On his map Onwhyn, takes a look at the tumultuous political environment of Europe at the time. He chooses a satirical approach to the conflict by depicting most of the countries on the map as animals and is filled with many other cultural references and cartoons.

Between 1853 and 1856, most of Europe was engulfed in war, namely, the Crimean War. This often-forgotten war was primarily caused by Russia’s desire to expand their territory to the Bosporus Strait. The Bosporus Straight was a crucial strategic geographic and military location, which was controlled by the declining Ottoman Empire at the time. Fearing this would make Russia too powerful, England, France, and Sardinia allied with the Ottoman Empire to thwart their efforts. On the top right of the map this is represented in many areas. First, the top right of the map shows the “balance of power” between the Allied Powers and Russia, with the “scale” tilting in favor of the Allied Powers—the eventual winner of the war. Second, Russia, depicted by Onwhyn as a bear, has its paw stepping on Crimea, where many of the battles were fought. These battles are represented by English and French ships in the Black Sea clipping the bear’s claws. Third, the Balkans, a part of the Ottoman Empire, is grasping a bottle in its talons over the Bosporus Strait. This represents both the Bosporus being a global bottleneck and the fact that it was still controlled by the Ottomans.

Many other conflicts, both internal and external are noted on the map. While these depictions are important historically, the map places less emphasis on them. The Caucasus region is referred to as “Cork As Us Mountains” and appears as a volcano. This is representative of a shaken-up bottle about to burst as the result of regional instability. Additionally, Poland is spelled in bones and is depicted by a woman on the floor in shackles, representing the Partitions of Poland that divided the territory between Russia, Austria, and Prussia. Finally, France, depicted as a gallic rooster, is protecting Emperor Napoleon III, which is why Austria, depicted as a two-headed eagle, has a broken shield reading “Treaty Vienna.” This is an obvious reference to the 1815 Treaty of Vienna, which sought to end Napoleon I’s European conquest and established a lasting peace in Europe (The Editors of Encyclopaedia, 2020). Now that a Napoleon was emperor again and war was waging again in Europe, Austria was being smart by keeping one head on France and the other on the ongoing Crimean War.

Taking a critical approach to Onwhyn’s map, there are a few errors. The biggest error is that Poland is not partitioned between Russia, Austria, and Prussia. For example, Galicia should be within Austria’s yellow borders. Simply put, Poland should not exist on this map. Onwhyn, however, cannot be faulted for altering the borders of most of the map’s island, as he does so for a satirical effect. However, the author’s personal perspective cannot be ignored. Being British, Onwhyn clearly portrays the English and its allies in the Crimean War positively, while looking down on Russia. This is evident as the word “despotism” being written on the Russian bear’s crown and “slavery, oppression, tyranny, bigotry, treachery, falsehood,” and “ignorance” are scribed throughout the bear.

Onwhyn’s choice to create a satirical map has several key implications. A satirical map allows him to convey more than strictly spatial information. Essentially, he creates a map with a narrative. Meanwhile, Onwhyn is still able to instill objectivity into the map by keeping the borders proportional. The combination of satire and objectivity enables Onwhyn to convey more information to the viewer than a stand-alone scientific map or political cartoon.

Several silences also occur on this map. The lack of a key makes it difficult for posterity to interpret the conflicts on this map. Many of the cultural references throughout the map were unique to the time, making it hard, without significant research, to decipher some of the cartoons Onwhyn chose to include. Furthermore, other than the aforementioned scale in the top right, this map does nothing to show the political alliances between the European powers. It makes sense, however, that Onwhyn had silences on the map; he wanted to simplify the map to highlight the Crimean War. Including additional information on the map would simply detract from Onwhyn’s focus on the Crimean War.

I hope the readers of Mappenstance will take some time to dissect this map for themselves. There are hundreds of intriguing elements on this map, which can pull you in for hours. If there are any important drawings that I left out, please point them out and describe them down in the comments.