Map of the Week -William Tune 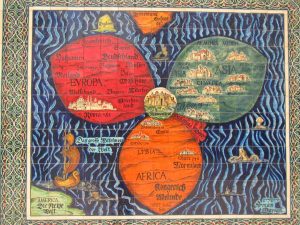 “And Did Those Feet In Ancient Times…”

One of the most important aspects of maps is their vulnerability to bias. Maps are at all times created and viewed through the mapmaker and the map consumer’s respective worldview. The epitome of this principle is Heinrich Bunting work Itinerarium Sacrae Scripturae. This was a book composed of multiple Christian works and multiple maps. Our “Map of the Week” is one of them. The chosen map is a three leafed map of the world with Jerusalem at its center, which will be referred to as the Hanover map.

To further understand the significance of the Hanover Map, its history must be investigated, specifically its creator. Heinrich Bunting was born in Hanover, in modern Germany. According to Jacques Keilo of Centrici, the coat of arms of Hanover contained a three leaf clover, thus the shape of the Map and its given name. Its shape is undoubtedly due to the bias of Bunting as the three leafed clover would be a familiar yet applicable means to view Jerusalem. Europe, Asia, and Africa all converge in the Middle East, making Jerusalem a central point in the old world. As previously mentioned, the Hanover Map was part of the book Itinerarium Sacrae Scripturae, which was created in 1581. This date is further supported by the appearance of America in the bottom right corner of the map fraternizing with a leviathan and a ship. The Itinerarium Sacrae Scripturae houses similar works such as a map of the Middle East depicted as a horse. It is important to note that earth had already been accurately mapped at this point. This affirms  that Bunting’s maps were stylized pieces demonstrating a worldview, which has large significance for the history of  cartography.

Bunting’s map disregards established geographical facts and bends them to present a world view. This is significant because Bunting recognizes that maps are a conduit for social energy, according to Wood in Rethinking the Power of Maps, and he uses this social energy to make a present a worldview. Bunting, a Christian, depicts Jerusalem as a Christian city, demonstrated by his placement of  three crosses on Calvary. Calvary was the site of Jesus’ crucifixion, therefore an extremely important place for Christians. If Bunting was presenting this worldview from a Islamic standpoint, he might have displayed the Dome of the Rock instead. Interestingly, each continent has equal access to the Holy Land. This is an interesting detail because a Christian would want to lay claim to the city. As a whole this map is important to Cartography because it uses social energy to display the world as many view it, with the holy land in the center. This effectively illustrates the power religion holds in the perception of space in society and the human mind.

The Hanover Map created by Heinrich Bunting deserves to be “Map of the Week” due to its interesting history, significance to cartography through the use of social energy, and its meaningful connections to the contemporary politics of the United States. In studying this map, the significance of Religion in the human experience is highlighted. The focus on Jerusalem demonstrates the social energy that the city holds. In conclusion, this map is the epitome of the use of social energy to argue a worldview.

1 Response to Map of the Week -William Tune