By: Sam Hyson and Evan Palmberg 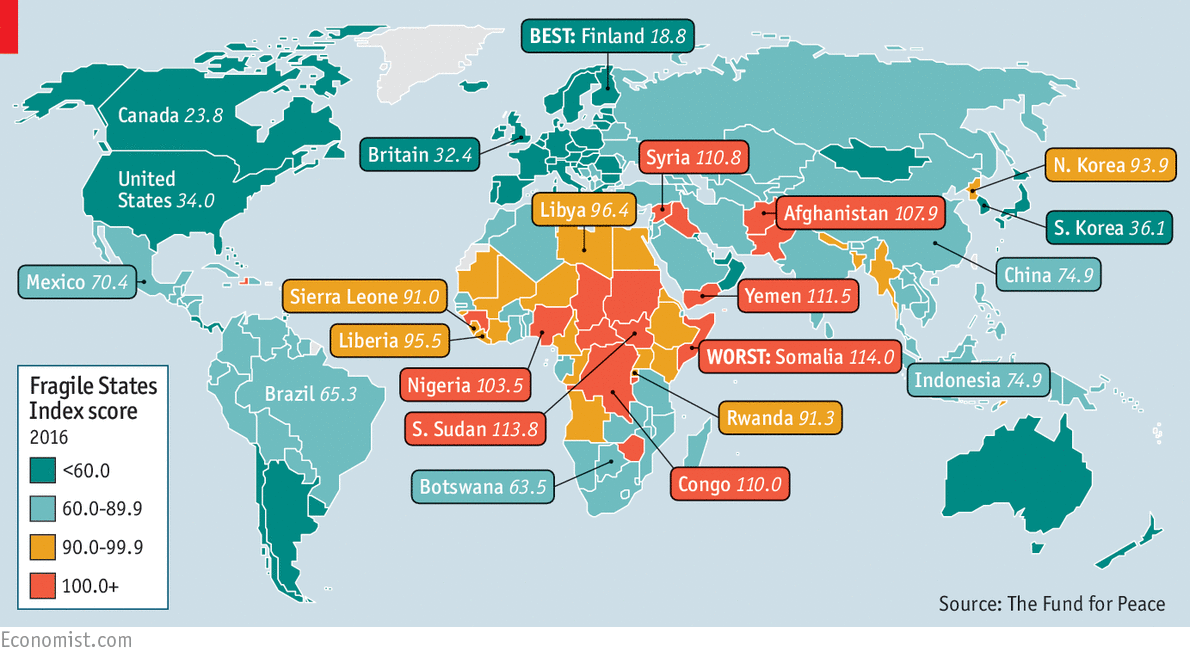 The Failed States Index map was first created in 2005 by the combination of the think tank Fund for Peace and the magazine Foreign Policy. The name was changed from the Failed States Index to Fragile States Index in 2014. The goal of the map is to assess a country’s vulnerability to collapsing. The map has been interactive in the past few years and contains an accompanying article with descriptions about why countries has changed in the rankings and what has caused these changes.

In general, Scandinavian countries rank among least fragile states, along with countries like Canada and Australia. On the other end of the spectrum, the most fragile states often come from Eastern and Central Africa, as well as the Middle East. All of the countries are ranked on a scale from 0-120, with 120 being the maximum level of fragile a country can be. This 120 scale comes from a series of 12 indicators ranked out of 10, separated into three categories: social indicators, economic indicators, and political indicators.

While this map seem mathematical-based and unbiased, that is not the case. Since this map has been made by American companies, it has received critique for being biased, having flawed metrics, and failing to predict important events. Looking through the various years of maps, the argument can be made that these rankings are nicer to American allies, and more critical of America’s enemies, like North Korea. Additionally, this map does not reflect certain parts of countries that are either better or worse then the ranking for the entire country.

This map also brings up the discussion of what it means for a country to be a “failed” state.  By calling a country a “failed” or “fragile” state, this may mislead policymakers to want to intervene in the country and help, when this may not always been necessary or the best course of action. Similarly, titling a country as “failed” presents a negative connotation to the rest of the world. This may have been part of the reason for the decision to change the name of the map. Calling a state “failed” creates the idea that a state is beyond saving, and there is nothing that can be done. Meanwhile, “fragile” causes people to think that there is still some hope for the country, but it needs to be done quick because the country is very susceptible to failing. This was a very important change that will hopefully lead to countries being further up the fragile states scale. While this map may seem simple at first, the connotation in its title and American bias that is presented creates critique about the Fragile States Index.