Map of the Week: Hitler’s Map of South America 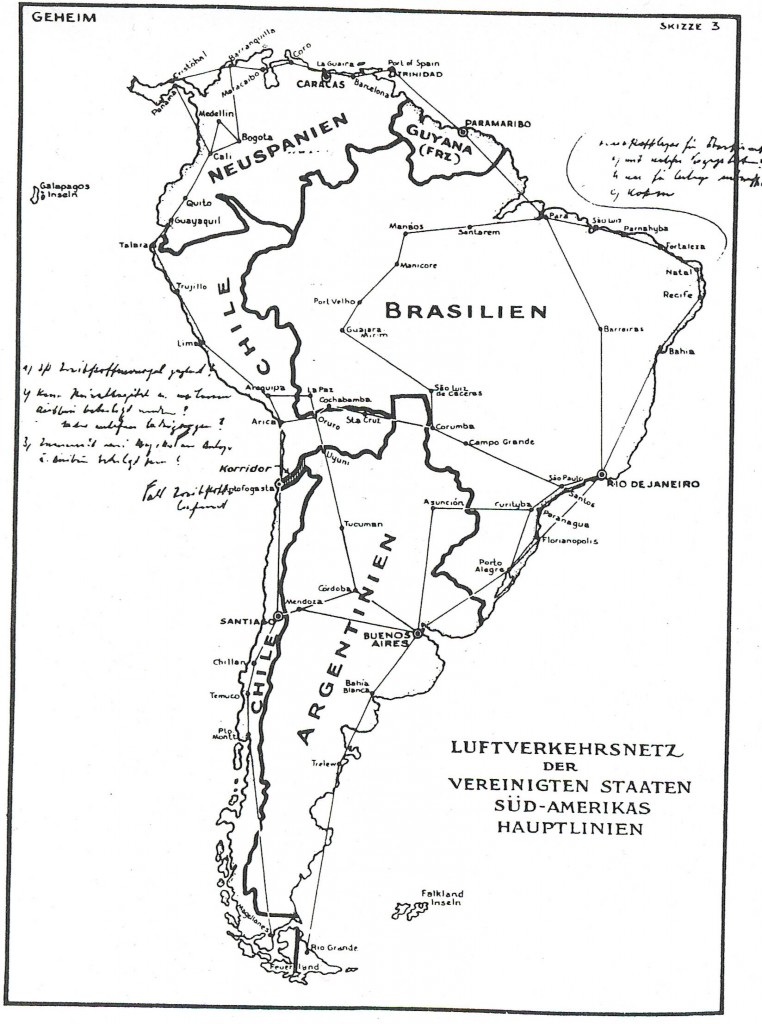 Have we ever wondered what WWII would have been like if South America was involved?  This map was created sometime in the late 1930s or the early 1940s and depicts a Nazi plan to invade South America.  The cartographers, however, were likely not German and the map is probably a British forgery.  Nonetheless, this map was still played a pivotal part in World War II and was an influential resource for the Americans.  Right away my attention was caught with the new names and larger regions on South America and the lines going around and through the country. There is also a German phrase on the bottom right portion of the map is translated to say “Air transport network of the United States of South America main lines” which telling the audience that this map had an aerial purpose.  Given the context of the time period and the complexity of the map, I think America should have been alarmed about the preparedness of a potential German invasion.

Hitler’s viewpoints were outlandish and absurd, so his depiction of South America during World War II shouldn’t come as a complete surprise.  However people during this time really thought Hitler could take over the world, and given the likelihood that this map is a British forgery only further tells us that this plan was realistic idea in the eyes of many. The cartographers consolidated the thirteen countries of South America into five different regions: Neuspanien, Guyana, Chile, Argentinien, and Brasilien.  This plan was similar to Hitler’s plan of taking over Europe.  Separating countries into larger regions would have made it easier for a Nazi invasion.

The Neuspanien (New Spain) region is not named after a South American country like the other regions which tells us that this region is different from the rest.  The cartographers may have done this because Hitler recognized Spain’s region not as one they wanted to take over.  The Nazi’s viewed Spain as a loose ally in the war, and the aerial routes into and coming out of Neuspanien would support that premise.  The Neuspanien region also has an important geographical location in context to the war because it is below the United States and positioned in between them and Europe.  However this map makes invading and taking over a country look easy.  The map assumes that all the aerial routes are open and that the Nazi’s can easily take over these places.  Hitler perceived the world to be catered to his wishes, meaning that he thought invasion and takeover were just going to happen if they made a plan an executed.  Too many important events in the world had occurred for a man and his army to just shape the world as they wished.

The aerial routes illustrate that Hitler and his government have a plan of attack in South America and they show the German influence and power in the world.  This was a time where air travel was advancing rapidly and the geographic imagination of many people were being displayed. The routes show how the German’s and their allies will be able to travel and transport supplies in South America.  The Germans would be able to move easily within the country, making them ready to fight and expand their empire.  The map has many routes going along the coast of each region, with only a few routes that travel horizontally through the continent.  This tells us that the Germans could move within South America but that they would try to avoid conflict by traveling on the coast of the continent.  Those routes would also make it easier to travel to different continents like North America and Europe.

This release of this map influenced FDR’s decision for the United States to enter the War.  FDR saw that Hitler wanted to invade South America and he saw their preparation level with a map of air travel routes already in place. He knew that South America could be a very important player in the war due to its geographical location. When he revealed the map in a speech he said, “That map, my friends, makes clear the Nazi design not only against South America but against the United States as well.”  This obviously alarmed the public right away.  They now had visual evidence of a Nazi invasion and public sentiment changed regarding the war. This was an important thing for FDR to say because he knew that there would be an emotional factor for Americans now.  Seeing a planned invasion so close to United States borders, with the possibility of the invasion moving into the US, frightened many Americans.  Seeing the atrocities happening in Europe, Americans knew they needed the keep the US safe.  FDR was gaining the public support he need and it ultimately helped him intervene in the war.

This map still remains an important artifact from WWII.  This unconventional map showed us a possible Nazi plan of invasion of South America.  The map’s aerial routes were advanced and show the Nazi’s were prepared and meant business.  The map also heightened the American sentiment which helped FDR decide to enter the war.  The vital role that this map played in WWII only further tell us how important maps can be.

2 Responses to Map of the Week: Hitler’s Map of South America