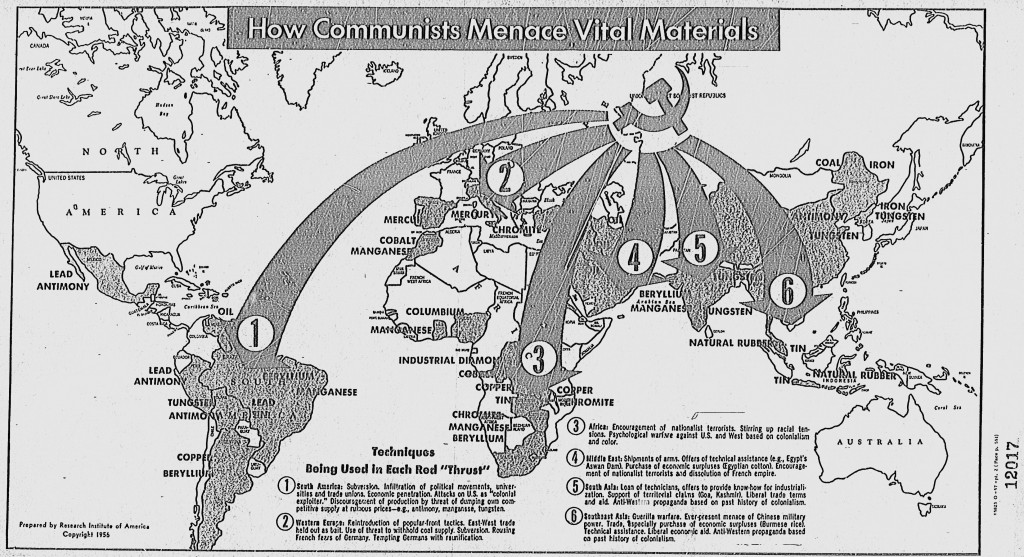 The map above was made in 1956 during the height of the Cold War. It was published in a Congressional Report, meaning that the audience was the people who were in charge of the country. The map uses language and symbols to instill fear in the viewers and spur them to take action. The title and other language on the map uses strong words, such as “menace” and “thrust,” to represent how communisms is being forced on the world. The list of “materials” that are being “thrust(ed)” on the world not only include metals and goods, but also include ideas and philosophies. The inclusion of ideologies in the list of materials at the bottom of the map gives the impression that communism is taking over the world both physically by controlling material goods and mentally by controlling people’s thinking. The use of arrows coming out of Russia also shows the idea that communism is spreading and that the policy of Containment will not be effective. The arrows themselves take up the majority of the map, which is important because the author is again representing the reach and influence of communism. Having the arrows come directly out of the hammer and sickle, which is the only symbol on the map, emphasizes that communism is overpowering the world. This map would cause fear in the viewers because they can clearly see the reach of communism and its impact on the world.

In the class discussion we talked about the inclusions and exclusions on the map. One important feature that was mentioned was that the author decided not to include the countries names on the maps. Instead of putting names on each country, the author put the materials that were from that country. The exclusion of a country’s name strips away its identity and simplifies it to a mere word or two. The simplification of the countries shows how the U.S.S.R. sees each country as a supply of resources they need rather than as an equal who a unique identity. The reach of communism is further emphasized because the countries affected by the U.S.S.R. are shaded in gray. The shading in of countries makes the United States more likely to take action because they can see that communism has already spread significantly.  This propaganda map would have urged congress to shift government policy away from the idea of Containment and towards a plan that took actions to combat communism where it was spreading and push it back towards Russia.