The Olympic Games and Cartography 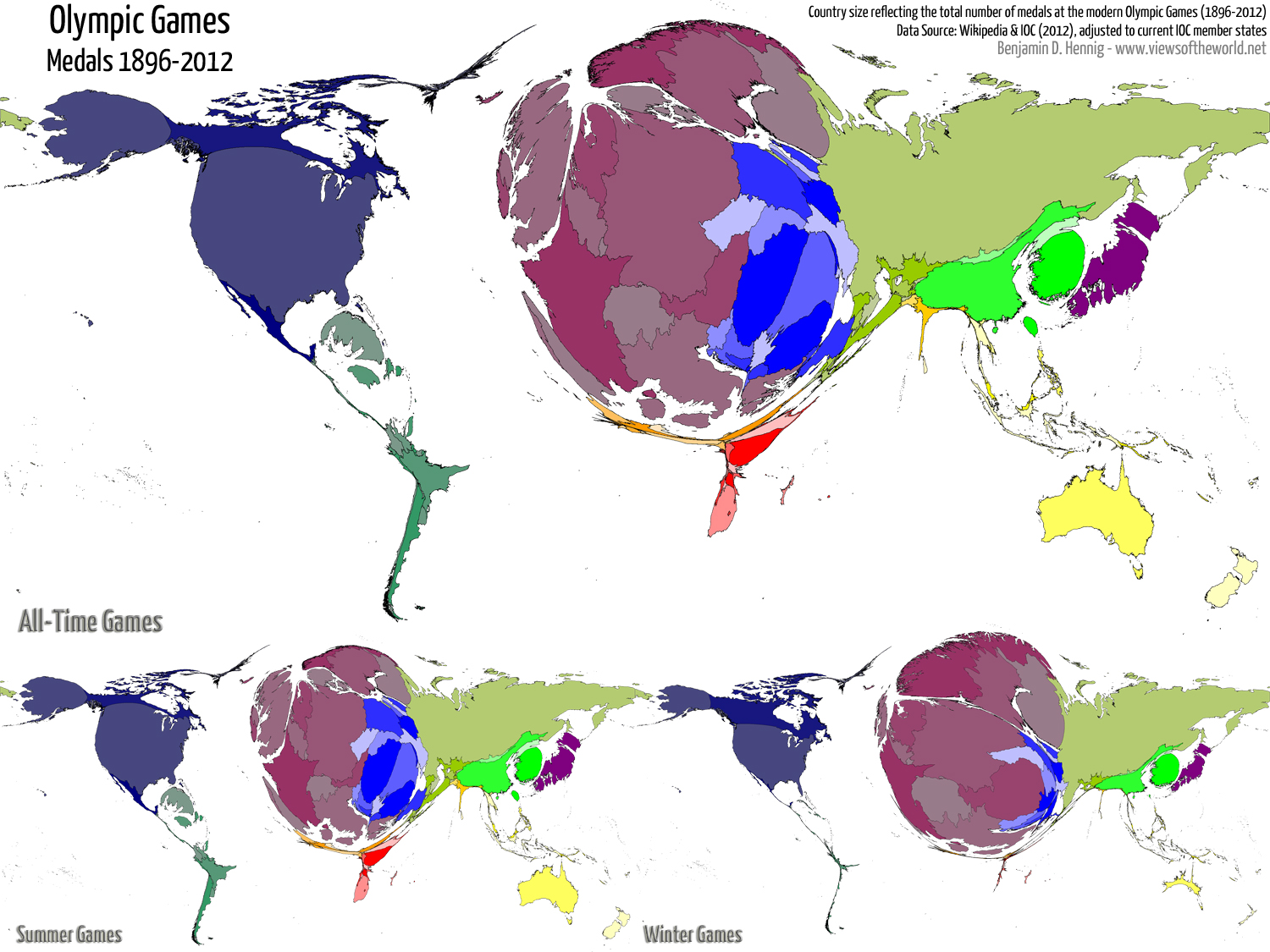 The wait is over. For three weeks during the frigid winter, global citizens get to display national pride as representatives from their country attempt to earn personal and national glory through a series of athletic events. The Winter Olympics physically brings the world together, yet this gathering also demonstrates how culturally, economically and politically different these countries are.  While on the surface, the Olympics are an international sporting event, the game’s scope of influence reaches far beyond the fields of competition. What role do maps have in displaying the complex implications of the Olympics? The map titled “Olympic Games: Medals 1896-2012” utilizes a unique form of visual representation which allows the audience to gather more information about the Olympics than could be gathered by looking at a chart or piece of literature. The map’s ability to spatially account for Olympic dominance allows the audience to understand that the games truly represent one of the largest geopolitical spectacles, not simply a gathering of the world’s best athletes. For those who think the Olympics are just a game, the spatial and visual representation utilized in this map demonstrate that the implications of the Olympics are much more complex and far reaching.

When first glancing at “Olympic Games: Medals 1896-2012”, some regions of the world are nearly unrecognizable due to alterations in the size of each individual country. Cartographer Benjamin D. Hennig exercised his cartographic license when deciding to use a cartogram projection in which each country appears to be smaller or larger depending on how many Olympic medals they have won since the Games’ inception.  J.B. Harley’s claim that “maps function as a kind of language” is evident in our cartogram’s case in how the map communicates a wide variety of information with its viewer. This specific map projection is certainly more useful than a chart or a novel because the audience can see how factors such as geography and colonization play a role in athletic success by using a single snapshot. The cartogram proves that certain countries are inherently disadvantaged in the Winter Games due to differences in climate and national wealth.   For example, the warmer southern hemisphere is nearly unidentifiable in the smaller map at the bottom of the page titled “Winter Games”. Meanwhile, the continent of Europe, which is usually blanketed by a layer of snow and ice, is so swollen that it appears to take up the entire map. Also, based off of a different cartogram which resizes countries depending on GDP per capita (http://jmgis3015.blogspot.com/2009/04/cartograms.html), we can see that the northern hemisphere seems to be more economically prosperous than the southern hemisphere. This economic advantage allows various countries the ability to invest in the expensive equipment and training facilities needed to be successful in sports such as the bobsled or alpine skiing. Also, countries which only recently have gained colonial independence seem to perform poorly in the games compared to countries which have been autonomous for longer periods of time. For example, many African countries which gained independence in the 1960’s and 1970’s are unidentifiable, while colonial giants like Germany, France and England are prominent fixtures on the map. Colonizers cared little about the athletic development in their colonies and tended to focus on exploiting these settlements for economic gain, thus hindering the development of sport in these subjugated areas. Also, during times of social unrest and large scale political upheaval resulting from independence efforts, colonies tend to concentrate more on restoring a stable civil society and less on securing a place on the podium at the Olympics.  The use of a cartogram is not only a visual novelty for many viewers, but also a powerful tool in allowing the audience to better understand the inequalities between different countries by using a projection which is very different from that of a traditional world map.

The timing of the Olympics is certainly one reason that the map merits recognition as Map of the Week. However, the map is also deserves acknowledgement for its ability to foster dialogues about a variety of topics by using minimal wording. Although the map appears to be objectively displaying the number of medals won my each country, the map also serves many underlying interests as well. Dennis Wood claims that “every map embodies the interest of their authors”, proving that no map is perfectly objective even though it may seem to be. The political undertones of the map are impossible to ignore given that some countries are literally overshadowed by the presence of other nations on the map. The cartogram also allows readers to understand what winning one gold medal means for different countries.  For instance, the US is expected to win numerous gold medals throughout the course of the games, so one individual medal will not cause a countrywide patriotic frenzy. However, if a country like Jamaica or Micronesia were to win a medal, their nation would literally earn a place on the global map and receive various economic and social benefits.  These points prove that the map does not solely represent one interest, but a number of intentions which together render the map an incredibly useful tool for looking at the history and the current state of the world. The map’s combination of unique visual depiction and multifaceted functionality make it more than deserving of the title Map of the Week.

The linking of the past, present (and in some regards) the future proves that “Olympic Games: Medals 1896-2012” is not only an aesthetically novel map, but also intellectually profound one for providing viewers with a current state of the world in a single snapshot. By resizing each country, Hennig allows the map’s audience to understand how a nation’s global prominence can literally grow as more medals are accumulated. The correlation between global influence and athletic prowess becomes apparent on the map, and Hennig should be applauded for his ability to seamlessly intertwine numerous interests into one single map. Will certain countries be able to live up to their legacy in the Games, or will a country nearly invisible on the map be able to bring itself to worldwide prominence? All that’s left to do is sit back, relax and enjoy the global spectacle that is the Olympics.

Harley, J.B. “Maps, Knowledge and Power,” in The Iconography of Landscape: Essays on the Symbolic Representation, Design and Use of Past Environment, ed. Denis Cosgrove and Stephen Daniels, (277-312). Cambridge: Cambridge University Press, 1988.

2 Responses to The Olympic Games and Cartography