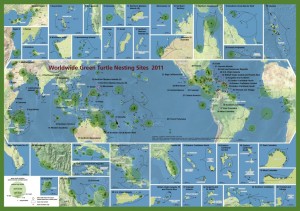 A wise old sea turtle once said, “the little dudes are just eggs, we leave’em on the beach to hatch, and then, coo-coo-cachoo, they find their way back to the big ol’ blue.” Crush may be a Pixar animated turtle, but his nesting and demographic tendencies are just like those of the green sea turtles that inhabit the Earth’s waters. Two years ago, the State of the World’s Sea Turtles (SWOT) program released a report on, you guessed it, the state of the world’s sea turtles, paying special attention to the endangered green sea turtle. Hundreds of researchers and scientists gathered seven years worth of data from beaches around the world, flying low to survey the sand, hugging the coastlines on boats, or simply walking along miles and miles of beaches to create an extremely accurate and all encompassing global census of green sea turtle nesting sites.

This data was simply data; numbers gathered from the simplest form of survey: counting. These numbers had nothing to say and were as scientific, reliable, and apolitical (and, dare I say, unrhetorical) as information can be. It was also, however, in a form that made legibility and practical use and translation an issue. So SWOT condensed all their numbers and data and used it as paint to construct a map visualizing the information they had collected. This map uses a sort of interaction and connectivity of scientific data and ecology, and applies it to something more political and social in a map. Once the scientific data was taken and translated into this map, SWOT took away its objectivity. The data obtained a statement because of the choices that were made and the interests that were used to mold it into a legible and easily accessible map. However, these choices must be made in order to web together a map that values scientific expertise, ecology, global interconnectedness, and social awareness.

This is a map with a purpose. 1,000 scientific researchers do not scour the world’s beaches counting shelled reptiles just for the hell of it. SWOT is a program dedicated to “generating a truly global perspective of sea turtles and forgoing global solutions to global problems.” This map was included in a report focused on increasing social awareness of global conservation efforts for sea turtles. The choices to include or exclude certain information, choice of symbols, perspective, format, color etc. are made with an objective to produce a map that will serve its purpose. The entire “artwork” of the map is designed in a way that makes world seem like an ecosystem. It uses only blue and green, and the majority of the map is water, providing a very ecologic aesthetic. The map is what the cartographer makes it, and the interpretation is left to the audience. In this case, SWOT singles out a certain aspect of the naturalized image of the Earth that we have all been programmed to accept, and brings that aspect to the forefront.

The choice of where to center the map also tells loads about the interests of this map. It is centered on the vast Pacific Ocean and cuts off a sizable chunk of Earth’s land, drawing the importance and focus of this map to be heavily aquatic. Centering the map on the Pacific and cutting and shrinking the African mainland to establish a more aquatic appearance does, however, leave the East and West equatorial coasts of Africa at the edges of the map and distorted, despite containing about one fifth of the global population. The forty subset maps along the top and bottom of the main global strip create a dizzying affect designed to strike the audience with the prevalence of green sea turtle populations around the world and the importance of awareness and conservation (Gold).

SWOT develops this map in a way that shows what they want to be shown, and hides what they want to be hidden. These choices display the dynamic and tension between revealing and concealing in rhetorics of display. As diabolical as it sounds, though, that is how SWOT makes the map serve its purpose, and that is what must be done to create a useful and successful map.

One Response to Map of the Week: Worldwide Green Turtle Nesting Sites