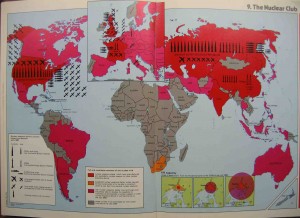 “The Nuclear Club” was published in The State of the World Atlas by Michael Kidron and Ronald Segal in 1981. The goal of the atlas was to translate into visual form the current political, economic, and social current events of the time. The goal of “The Nuclear Club” was to expose the overwhelming power held by members of the “Nuclear Club” – those nations who, at the time, maintained an intimidating and overwhelming power over the rest of the world through their known ability to create and utilize nuclear weapons. This power is exposed through the map through the cartographic choices of the mapmakers, including the content, silences, colors, symbols, and cartouches.

In this time period, the ability to develop nuclear weaponry became a symbol of power among the nations because of the implications and threat posed by nuclear devices. The actual symbols of weaponry were used in the map to denote size. While just plain dots of points could have been used, Kidron and Segal went with the more provocative images of submarines, planes, and missiles in their map.

The map also has many silences including showing only one form of power – military. The map does not include other forms of power such as diplomatic, military, or political power.

Radical mapping creates a “rhetorical tension between social change and social control” (Barney). In the post-Cold War era, maps were created to announce bold statements about the condition of the world. Maps began to stray away from the ordinary neatness of political maps, towards more radical methods of mapping. Cartographers used loud colors and graphics to instill feelings within the viewer based on how they immediately perceived the map. For example, a viewer of “The Nuclear Club” immediately perceives the red that dominates the map. In radical mapping, the cartographer must be sure to maintain a balance with his artistic choices. While using loud colors, indefinite or inaccurate borders or weird projections map appeal to the viewer’s senses, it is also important that the viewer is still capable of recognizing that these things are happening to their own recognizable world in order to make an impact. Radical cartographers appealed to the emotions of the viewers, often carrying a plea for the viewer to realize the need for change in the world.

This map also utilizes cartouches to reiterate the power and intensity of nuclear weapons. The cartouche shows relative power of different nuclear bombs as technology improves as compared to the Hiroshima bombing. The cartouche adds urgency to the map and also plays on the emotions of the viewer by juxtaposing the Hiroshima disaster with the possibility of a much worse disaster.

By utilizing the cartographic techniques of radical mapping, Kidron and Segal’s map effectively exposed the overwhelming power held by members of the “Nuclear Club” and played a role in a critical period in United States history.

1 Response to “The Nuclear Club” Presentation