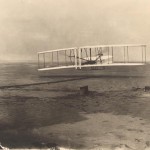 One of the most significant milestones in the history of life on earth occurred several hundred million years ago when the first living organisms took flight with wings.  Initially there were insects, who ruled the skies for at least 100 million years.  Then about 220 millions years ago the first flying dinosaurs, called Pterosaurs, appeared.  Roughly 70 million years later, the Pterosaurs were either joined by, or turned into, slightly different kinds of feathered creatures called birds.

Although there have been many significant human milestones, one of the most groundbreaking (pardon the pun) occurred when the Wright brothers ushered in the age of human airflight in 1903.  Not surprisingly, it was the brothers’ observations of birds that helped them construct an aerodynamically sound flying machine.  Birds, they noted, changed the angle of the ends of their wings to allow their bodies to roll left or right. 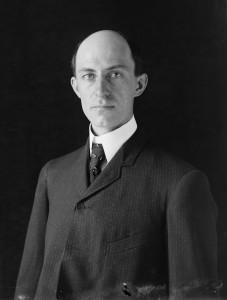 Wilbur and Orville realized that this was also a good way for a flying machine to turn.  A pilot needed only to lean into a turn like a bird or a person riding a bicycle.

As fate would have it, the Wright brothers’ expertise in bicycles played a crucial role in their ability to solve a variety of conundrums associated with air flight.   In December of 1903, Orville and Wilbur Wright left their bike shop in Ohio to test their latest ideas about flying on the beaches of North Carolina’s Outer Banks.  The first historic flight occurred on the 17th of December, an icy cold and windy day at Kill Devil Hills.  Bad weather had been a persistent problem and the brothers began that day nearly ready to give up and try again the next year.

After two failed efforts to fly their machine that day, Orville Wright was able to take the Flyer for a 12-second, 127-foot-long sustained flight into a 27 mph wind.  Although he never went higher than 20 feet above the ground, this was the first successful, powered, piloted flight in history. 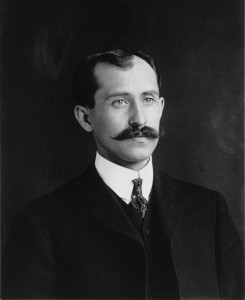 Minutes later, another flight piloted by Wilbur traveled 852 feet and lasted nearly a minute.  Heroes were made on that day, and the world was forever changed.

The brothers knew that they had to make several improvements before their machine could be considered a practical airplane.  In October of 1905, they flew an airplane almost 25 miles in 39 minutes. Wilbur and Orville Wright had at last invented the world’s first practical flying machine. They continued to set new records in distance and duration of flight in front of astonished crowds.  In 1911, they flew the first plane to cross the United States. This flight took 84 days and had to stop 70 times.  By the 1920s, people began to recognize the importance of honoring the Wright brothers’ heroism.  On March 2, 1927, President Calvin Coolidge established the Kill Devil Hill Monument National Memorial on the exact spot at which the historic first flight occurred.

In previous blog posts, we’ve documented the remarkable accomplishments of other scientists and inventors who devoted their lives to making the world a better place.  These notable individuals include Marie Curie, George Washington Carver, Florence Nightingale, Albert Einstein, and Mae Jemison, among others.  We add the Wright Brothers to this illustrious group.  The gift of flight has immeasurably improved the quality of countless lives.  People are now better connected through globalization, and the science of flight has put men on the moon.  We owe a debt of gratitude to the courage, genius, persistence of Wilbur and Orville, as well as to the many other early pioneers of aviation.

Below is a clip from NOVA’s tribute to the Wright Brothers on PBS.