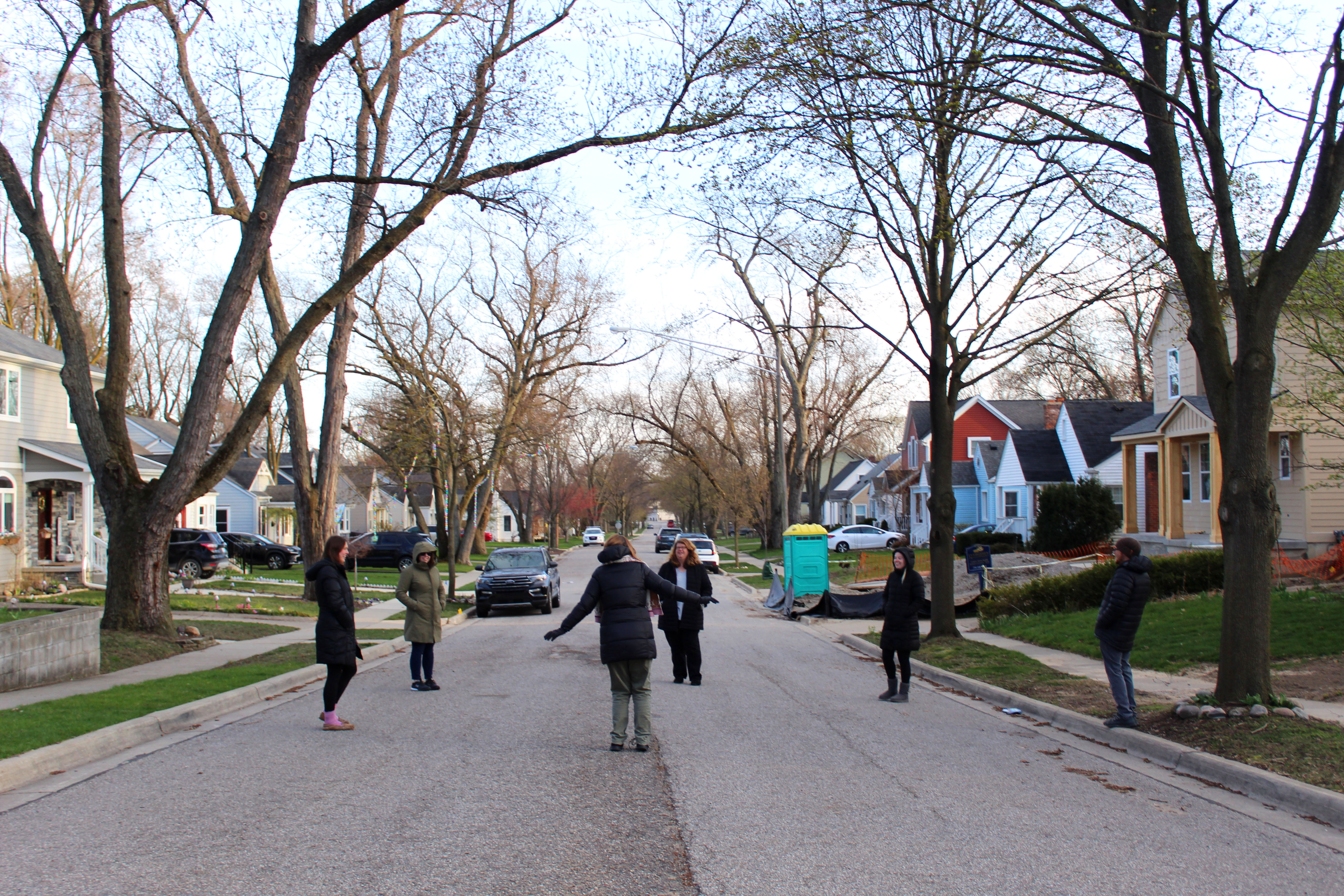 Since social distancing began, this friendly formation has become a regular sight on Arthur Street.

My neighbor Stephen, a soft-spoken 31-year-old in glasses and a stocking cap, stood on the curb in front of his house, holding a large painted sign made of sheet metal.

On it, a balding man with bright eyes held a shot glass full of dark liquid in one hand, his other raising a finger inquisitively in the air. The words “Acts Without Discomfort!” were painted in faded letters next to a bottle of Lash’s Bitters, a natural tonic laxative from the 1930s. He held it up for our appraisal.

“Oh, this is like Antiques Roadshow!” exclaimed another neighbor, Maureen, standing in the street. “Fifty dollars?!” she guessed. 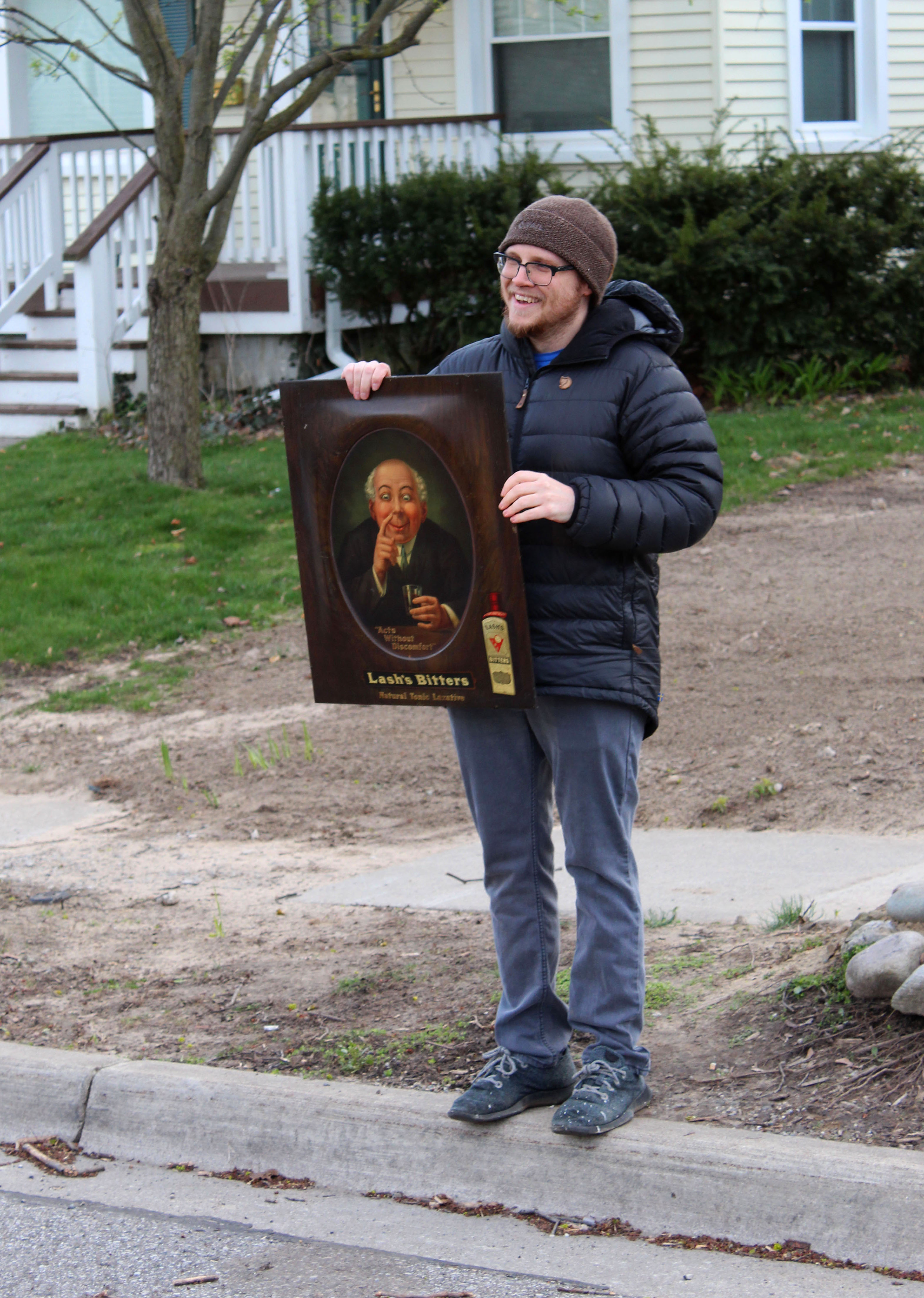 Stephen proudly displays one of the many antiques he has collected over the years.

“In the thousands?” I guessed.

His neighbors, a dozen of us who’d gathered around, broke into a chorus of astonished gasps and impressed exclamations.

Four and a half weeks ago I’d never even met Stephen, who’s new to the neighborhood. The antique Lash’s Bitters sign, he said, was just one of many valuable objects he’d collected during his years of dealing antiques, a passion-turned-business he’d adopted from his father when he passed away.

It was also one of the most personal and interesting facts I knew about any of our neighbors, who’ve taken to gathering in the street every night during this strange season of quarantine for a little socially-distanced social hour.

At seven o’clock each evening, the people of Plymouth, Michigan come out of their houses. They come dressed for the weather–in shorts if it’s sunny, in parkas if there’s snow–and they stand in a circle. This six-foot-apart circle is a place of familial banter, random stories, some awkward pauses and a lot of laughs. For 45 minutes every night, they break from the homes that hold them hostage in order to gather as a community.

“In most things in life, your interactions and your connections come from a commonality. Like you all go to the same school, you’re all in the same family, or you work in the same place,” said Kathleen, my next-door neighbor and long-time family friend. “In this scenario, you’re from many different backgrounds, you’re different ages, you’re different family configurations and all that. But you can form a connection with those types of people nonetheless.” 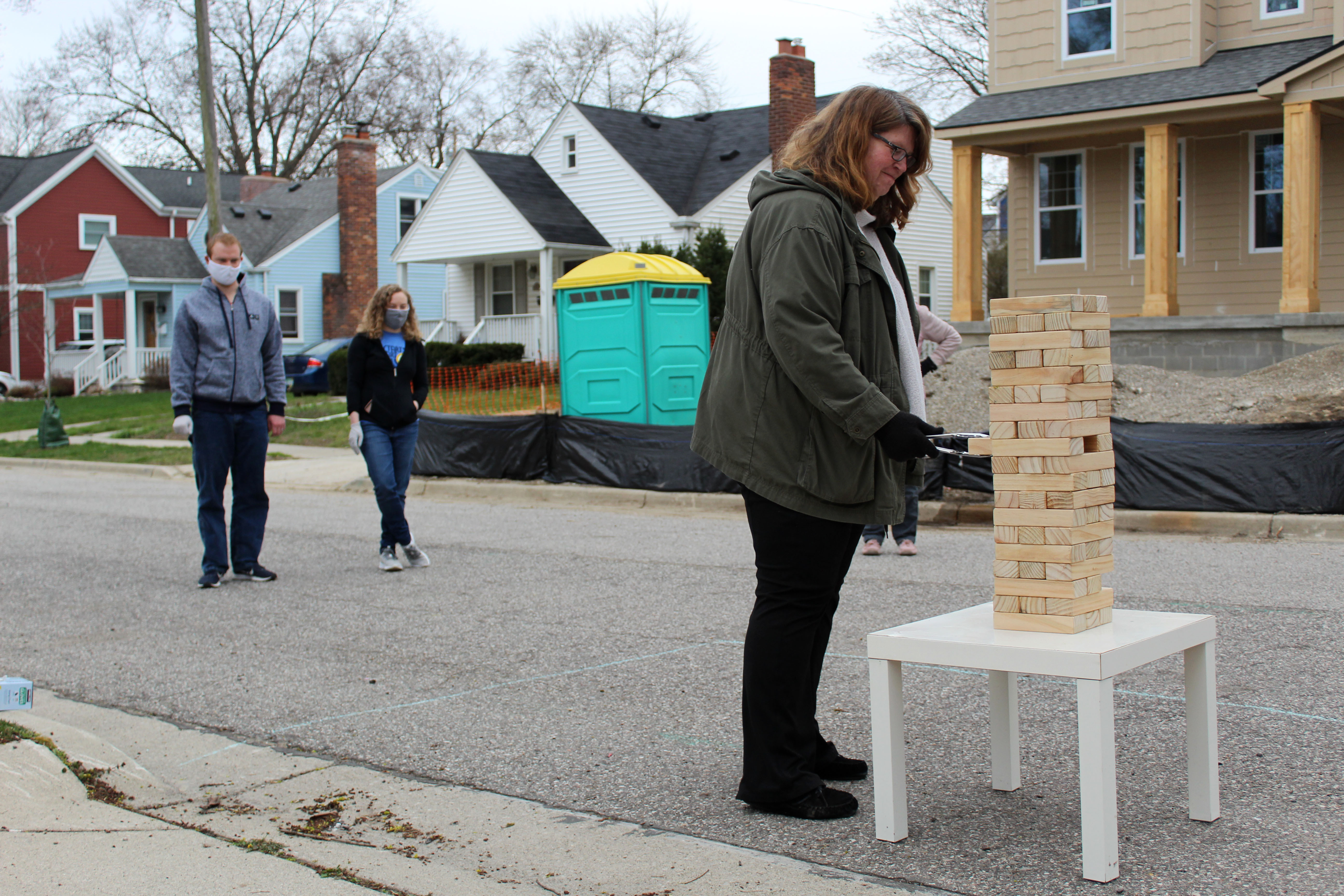 Socially-Distanced Giant Jenga: a new take on the old game, this time featuring gloves, masks, a 6-foot-across safe zone, and Kathleen’s salad tongs put to a new use.

And different we are. The rotating cast of characters includes all sorts of people: a dedicated gardener and her donut-loving daughter, an antique dealer and a rock band member, an animal-loving high schooler and a woman who is in search of the world’s biggest wave.

For Stephen, who just moved into the neighborhood a few months ago, the nightly event has been a great way to meet people.

But the newcomers to the neighborhood are not the only ones making new connections. Kathleen, who has lived in her house on Arthur Street for 19 years, said that she knows Stephen even better than she knew the person who lived in his house previously, despite having been neighbors with her for almost two decades.

“I have a tendency to think of Plymouth as a very friendly place. But do I know the people that live two doors down from me? No, I couldn’t even tell you what they look like!” she admitted.

But since Michigan announced stay-at-home orders and Plymouth Pause began, that has changed. As one of the most committed attendees on the block, Kathleen says that the event has given her “a different level of intimacy with the neighborhood” that she did not have before.

Although this pandemic is doing everything it can to keep us away from each other, I’ve lately come to see that retreating into ourselves—or connecting through technology—are not the only options.

Plymouth Pause has created moments of joy beyond just the nightly meetings, like the surprise 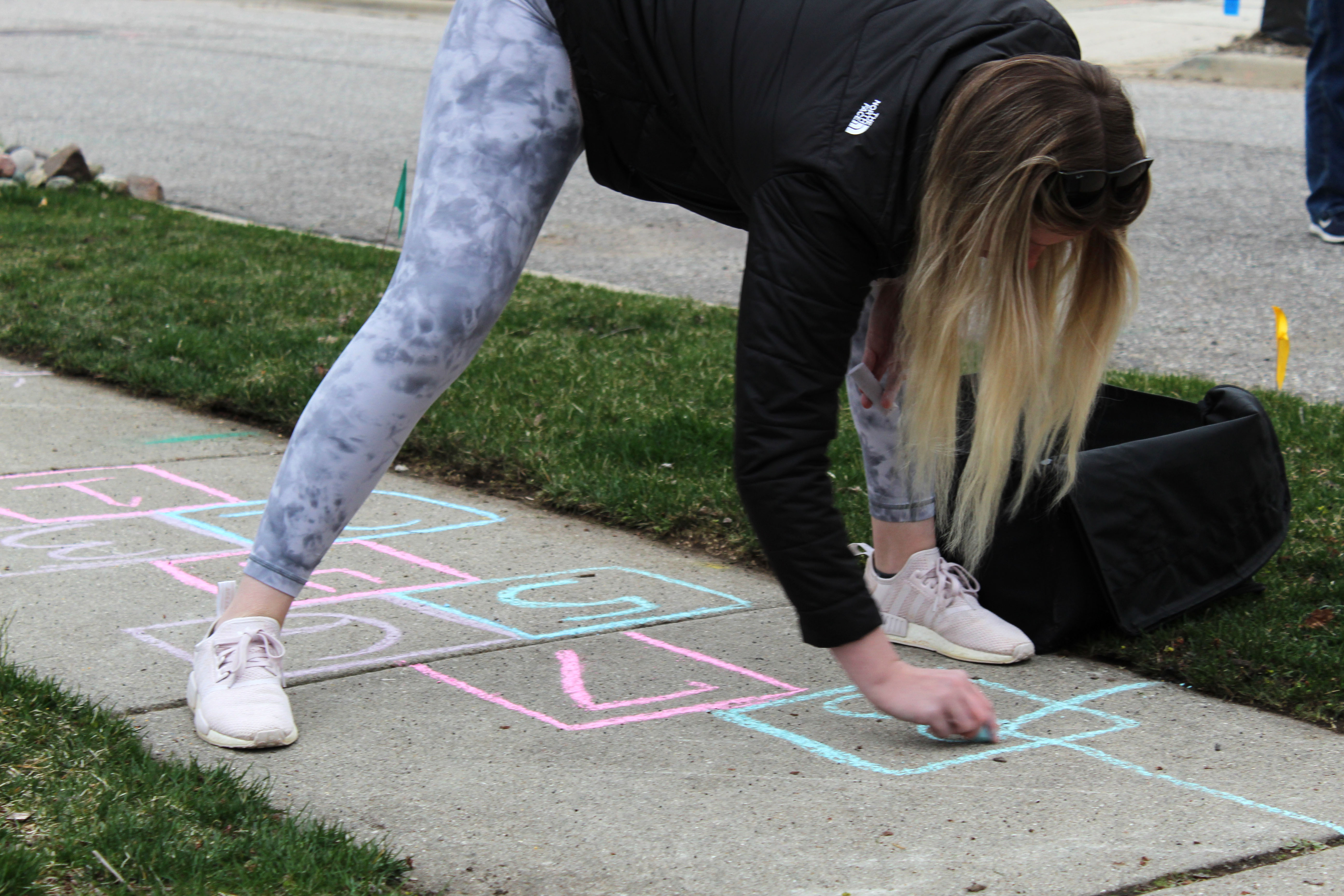 Rose, my neighbor from two doors down, creates an interactive and educational sidewalk for families on walks.

chalk-covered sidewalk and roll of toilet paper that Kathleen and her teenage daughter, Elizabeth, presented to Stephen on his birthday last week.

“You guys made my birthday,” Stephen commented afterwards.

Like a chalk drawing, Plymouth Pause just goes to show how far the effect of a simple action can go, and how little it can take to make a difference during these unprecedented times.

“It doesn’t take much effort to make those connections,” said Elizabeth, referencing her new relationships with her neighbors. “We’re literally just leaving our house and standing in a circle just talking, like it’s not hard. It doesn’t take a lifetime to make connections.”

And who knows what surprises could be hiding on your street? There was an antique dealer with a valuable laxative advertisement on mine—there could be a talented violinist, a brilliant comedian or an aspiring magician on yours.

“[Plymouth Pause] has taught us that there’s humans right over there across the street that you should be interacting with and that you’re not,” said Kathleen. “People need people no matter what.”