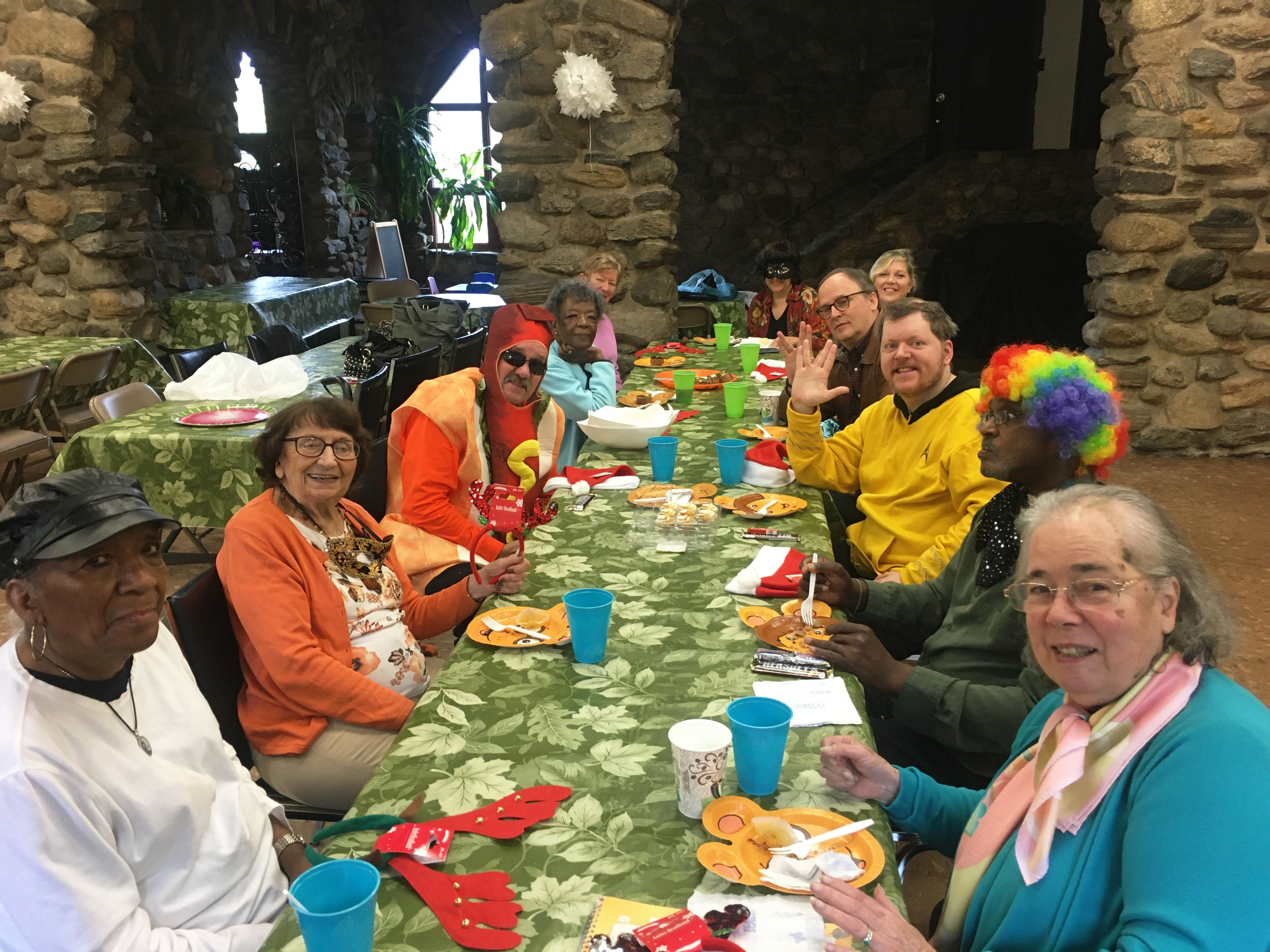 Members of the St. Andrew’s Day Program Group dined together before the coronavirus put a hold on all activities.

Anyone who interacts with Elisabeth Southorn knows that she has a big heart. She also has a knack to bring people together. So shortly after settling in the town of Mount Kisco, New York in 2012, she set about organizing a youth choir called the Westchester Youth Choirs (WYC).

I served as one of her assistants for two years during the infancy of the program, and witnessed first-hand the joy that Southorn could create by teaching children songs for their concert. She has over 25 years of musical experience, from singing in the San Francisco Opera to directing professional choirs in Portland. Yet she made every child feel that they were important, even pivotal, to the success of the choir. Even as choir members have grown up, she’s always kept the choir going for the children.

COVID-19 has put an end to the choir, at least for now.

“I never dreamed something like this would happen,” she said. “We didn’t get to do a concert this year.”

In typical fashion, Southorn has worked hard to keep members of her choir engaged during the pandemic, sending videos and supportive messages.

Southorn combines her love of music with her other great passion, social justice. WYC has allowed her to do both, by performing music while raising money for important nonprofits that benefit others.

So not only does Southorn send cards to her WYC members, she also sends them to kids in the children’s choir at church, which she directs; two pen pals in prison; her daughter Debbie and her friend; and the people with physical disabilities at St. Andrew’s Day Program, where she is the program director.

St. Andrew’s serves many people who have suffered strokes and Southern is responsible of creating a program with games and crafts for six hours a day.

“They really are very close-knit and not a very big group,” she said. “Sometimes, some of them are out for medical reasons for weeks and months at a time and then they come back and can’t wait to be together.”

When COVID-19 hit Westchester County, Southorn and her group didn’t even get to say goodbye because it happened so quickly. “By Monday, it was so clear that everything had to be shut down,” Southorn said.

Once she realized that she wouldn’t be able to interact with the group in-person for a while, she thought about how to entertain them from afar. Since some of the members have had strokes, it’s difficult for them to communicate.

“Immediately, I was trying to think about how I’d be in touch with people because they are so lonely,” she explained. 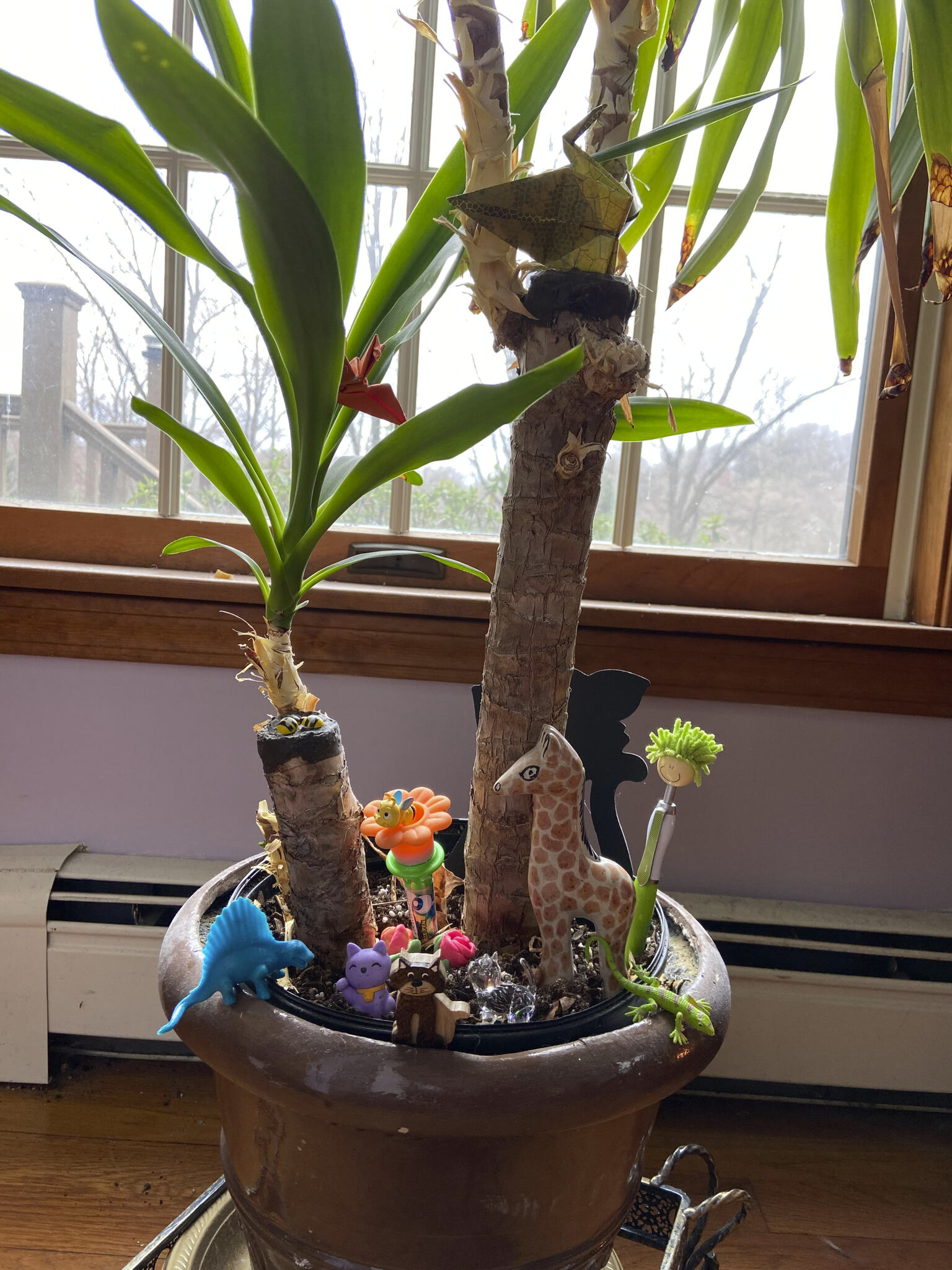 A plant inside Southorn’s home is surrounded by brightly colored characters.

Southorn came up with an ingenious idea: to take them on virtual tours of her house while incorporating activities like singing and crafts into the experience. This week, she plans on showing her attendees her collection of nativity scenes from around the world that she keeps on permanent display.

“Then, I’m going to sing ‘Morning Has Broken’ because we used to always listen to a Cat Stevens album all the time,” she says with a big smile on her face.

Without the coronavirus infiltrating her daily life, she would have never been able to show her members her house. When Southorn was making her virtual tours, she suddenly realized that her mother has never been to her house in Mount Kisco.

Southorn reached out to her sister, who works at the same facility in California where her mother, to show her the videos. Her sister raved about how much their mother loved the videos and asked if she could show the videos to the other residents. Southorn mused that it was just her house, but that the residents also enjoyed the music that she sang, which included classics like “What a Wonderful World.”

Confined to her home by the coronavirus,  Southorn is busier than ever. At first she thought she would have time to clean her basement. But now, along with giving remote tours to the group from St. Andrew’s, she’s busy creating virtual content for two children’s choirs and sending 30 to 50 pieces of mail every week.

“I think getting mail is really fun for everyone,” she said, as selfless as ever. “Something addressed to you to make you feel appreciated.”