I was apprehensive about covering the story of doctor and nurse celebrations at the Northern Westchester Hospital, but I knew it would be a great clip. I didn’t know what was going to happen. I had never even thought about how close you have to get to have a good recording on your phone. Will everyone be wearing facemasks? How many people will be there? What about first responders? Is there enough PPE for them?

I emailed Professor Mullen before the event to have a clear game plan of what I was going to do. I knew two things: I had to wear gloves and I had to wear a mask. I decided that I would write out a list of questions and hand them to the people that I wanted to talk to, who would then take my recorder and speak into it. The plan seemed pretty solid and I felt comfortable with doing that.

As six p.m. approached, I became more and more nervous. I had no idea how many people were going to be there and although I would be outside the hospital, I would still be at a hospital. I got to the hospital half an hour early because I completely forgot that there would be no rush hour traffic because of the virus.

I parked at a nearby CVS and put on my mask and gloves. I stuffed my keys in my pocket, along with my spare pencils and recorder. As I walked over to the hospital, there was a group of firefighters behind me, heading in the same direction. When I walked up to the hospital, the loop outside the main entrance was filled with fire trucks, fire chief cars and ambulances. I met the Public Relations Director for the hospital outside and she showed me around. 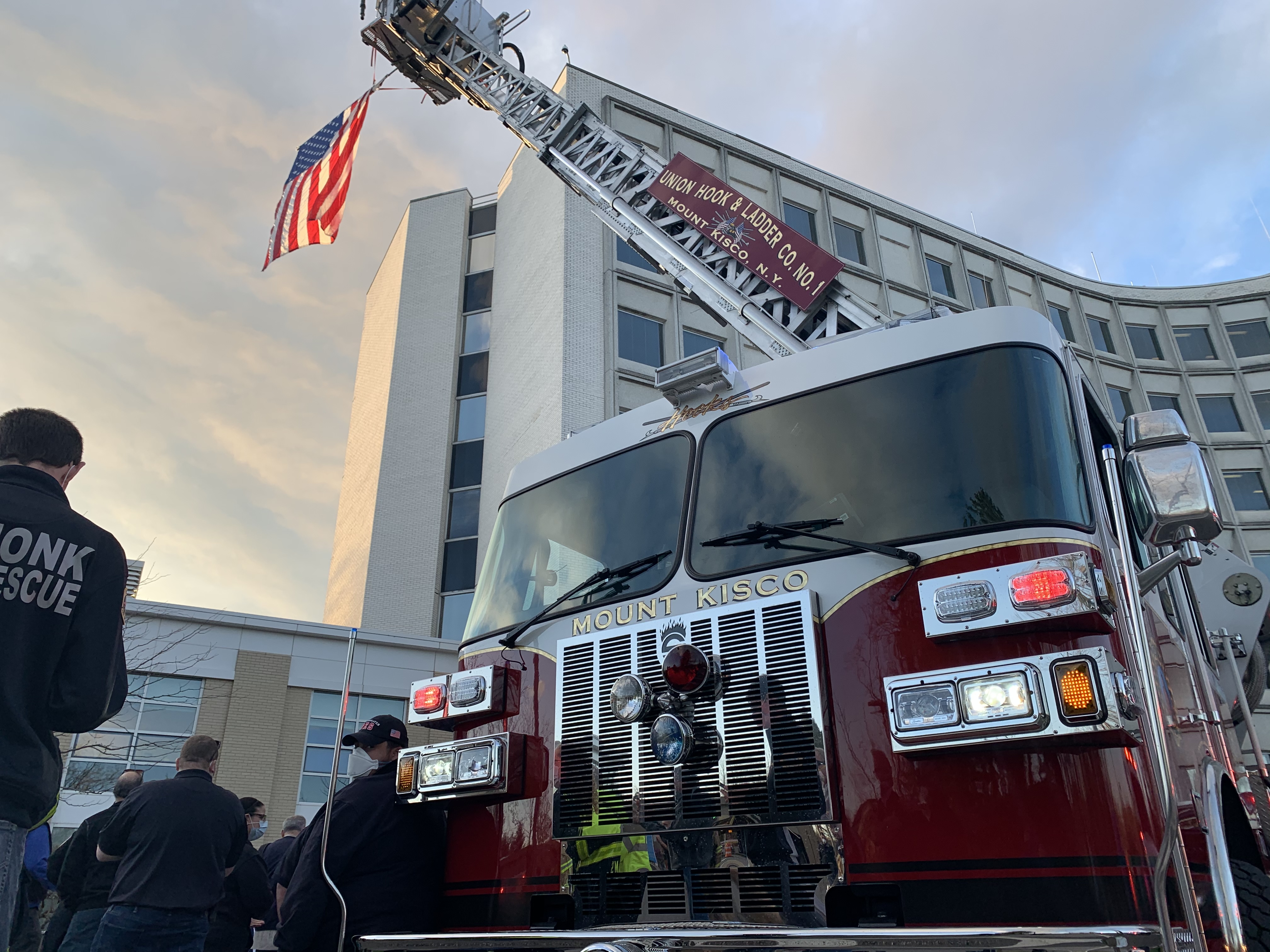 One of many fire trucks that attended the celebration of the hospital’s workers. It was a beautiful evening and people were in high spirits.

She introduced me to a volunteer firefighter who organized the event and whose wife was also a nurse at the hospital. He started crying when I asked about his wife’s work schedule and I suddenly realized I didn’t know how to express my sympathy. I couldn’t lay a hand on his shoulder. I couldn’t hold his hand. I couldn’t even give him a pat on the back. When I realized I couldn’t touch him, I tried to make a very somber face. Then, I realized that he couldn’t see half my face. I looked at him with a tear in my eye and expressed my uttermost gratitude for the work that he and his wife do for this community. His voice cracked as he thanked me and ushered over another man from his firefighting team. This moment made me think about what the future will hold concerning physical affection: not just handshakes and basic greetings.

For the rest of the time, I watched as the first responders sounded their sirens and the nurses and doctors cried as they walked in and out of the hospital. I was able to interview a doctor and another individual from the hospital, who said that they felt the love from the people who were able to come out and show support, as well as the people from at home. It was a powerful moment for me. Watching those who risk their lives for others who risk their lives is unlike anything I’ve ever seen. Handmade signs from family members and ice cream sandwiches from the local ambulance team. I took a deep breath and took in this moment. I wanted to remember what it was like to hear the cheers and sirens that made a somber day of quarantine an amazing day of showing love.