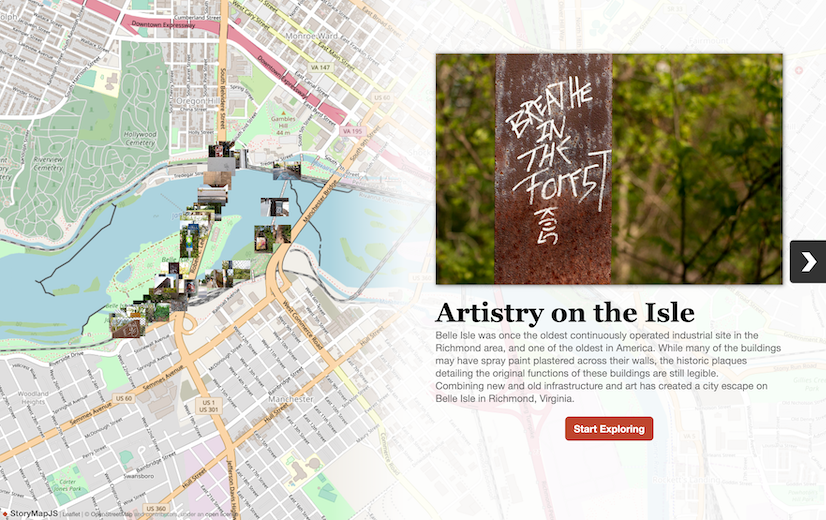 A three-mile loop from Belle Isle to downtown Richmond and back reveals small but telling details of how city dwellers interact with the James River. Click map to begin.

By Gabi Williams and Frances Gichner

As the weather warmed this spring and Richmonders took to the James River, we designed a walking tour of Belle Isle, a historically significant island in midstream, tracking graffiti and modern human influence on the river.

Why did we do this? Belle Isle has a long and detailed history in Richmond. Today, it is a popular social spot that has historical gems scattered throughout the park. Modern art on the James River includes a widespread graffiti influence that can be seen around Belle Isle and the city of Richmond. 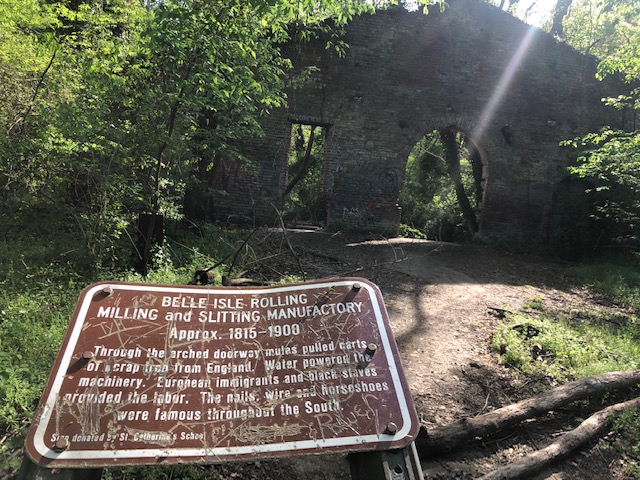 The ruins of Old Dominion Mill on Belle Isle

HISTORY
Belle Isle is a large part of Richmond’s history. It was originally explored in 1607, and was seen as a refuge from growing city life once Richmond was founded in 1742. Richmond settlers established a working fishery on Belle Isle that lasted until 1814, when Old Dominion Iron and Nail Company converted the land into a nail factory and ironworks, whose ruins can be seen along the James River today.

During the Civil War, Old Dominion supplied both animal and human war gear. Production skyrocketed, and later, after Belle Isle was converted into a prisoner of war camp, Union prisoners and slaves supplemented Dominion’s labor force. Over the course of the war, approximately 20,000 prisoners would pass through the camp.

After the Civil War, the Old Dominion Nail Factory and Manufactory continued to operate until 1972. There was a hydroelectric power plant on Belle Isle at the same time, between 1904 and 1967).

TODAY
Belle Isle is part of the James River Park System, which attracts over two million visitors every year (James River Park System). It is a haven for city dwellers looking to escape to a quiet river setting for the day. On any sunny day, you can meet dog owners, cyclists, climbers, rafters, families, and artists taking advantage of this historic landscape just minutes away from downtown Richmond.

Belle Isle was once the oldest continuously operated industrial site in the Richmond area, and one of the oldest in America. While many of the buildings may have spray paint plastered across their walls, the historic plaques detailing the original functions of these buildings are still legible.

Join us on our journey!