Well, the Solidoodle has not met our expectations by any stretch of the imagination. 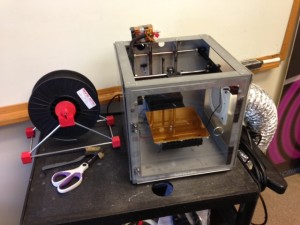 There were several issues with it, and we still have not been able to print, and the printer is now in a state that it will require significant repair or replacement parts.  Here is a bulleted timeline of the project:

In conclusion, we have been waiting and working for four months for a printer that has not printed more than a couple test prints correctly.  Even though the Solidoodle printer was half the cost of the Makerbot Thing-O-Matic and came pre-assembled, we have a working Makerbot, and a Solidoodle that never printed and is in dozens of pieces.

We are canceling the second order and will be looking at an alternative next week.

This entry was posted in @UR, Printing. Bookmark the permalink.