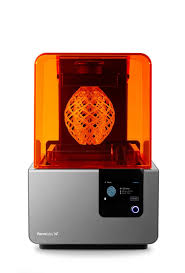 As of 2018, the TLC operates a Formlabs Form2 printer that is accessible to the University community at large.

This printer is an SLA printer and uses a liquid resin that is cured by the interaction of a laser that is located below the printer and scans through the liquid at the currently printed layer.  The build platform then raises out of the vat of resin a small fraction of an inch to then print the next layer.  The platform raises again to repeat the process until the entire object has been printed and hangs down from the platform. 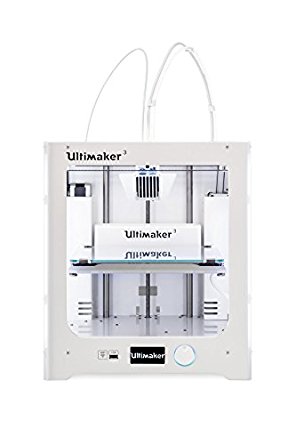 As of 2018, there are two 3D printers available to assist collaborations with faculty on developing 3D printing for research and scholarship needs.  One is the same model printer, Form2, that the TLC operates (and this one can be used to augment the printing capabilities of the TLC printer under moments of high traffic need).  The second one is an Ultimaker 3.

The Ultimaker 3 is an FDM printer as it uses plastic filament on a spool to feed the printer, melting it and positioning the molten plastic where it is needed to print one layer of an object.  The print bed then lowers a small fraction of an inch in order to print the next layer.  The bed lowers again, and the printing process is repeated until the entire object has been printed.  One advantage of the Ultimaker 3 is that it has two print heads.  Therefore, it can print two colors at one time or even use regular plastic on one print head while using water-soluble filament on the other head in order to provide temporary scaffolding for complicated designs.