Meghna Melkote is a rising sophomore from Scranton, Pennsylvania majoring in Political Science and Philosophy and minoring in Music. This is her first summer working with the Race & Racism Project as a member of Team Archive. She is involved with the Mock Trial and Debate teams, performs in chamber music ensembles, is a member of the Phi Alpha Delta Pre-Law Fraternity, and is a content curator for public history platform bunkhistory.org. 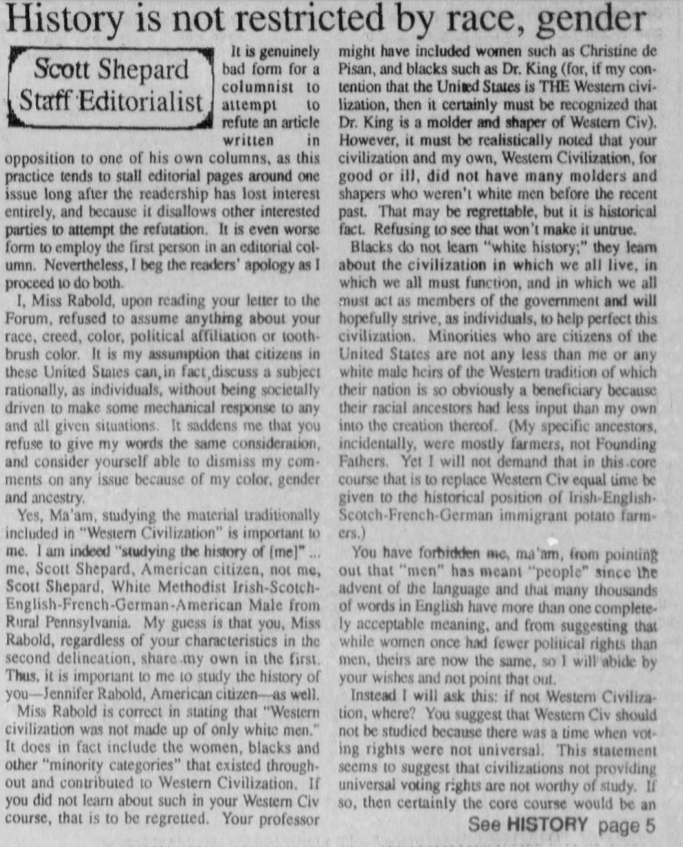 Throughout my research, I’ve found a lot of Collegian articles over whether or not to require Western Civilizations as a course. This article, written by staff editorialist Scott Shepard, is a response to a piece written by student Jennifer Rabold. Shepard’s main argument is that “history is not restricted by race or gender,” and that Western Civilization is everyone’s history. I’ve been doing research on the history of an integrated curriculum, and I’ve generally stayed away from inserting a strong opinion into what I find. However, it was this article that allowed me to form an argument as to why we need to engage different, non-Western perspectives in our academics. Rather than simply discuss what he says, I would like to take some time to directly refute Shepard’s argument in a manner relevant to my research project.

Shepard asserts that “Blacks do not learn ‘white history’; they learn about the civilization in which we all live, in which we all must function, and which we all must act as members of the government as will hopefully strive as individuals to help perfect this civilization.” However, Shepard is confusing history with current civilization. Because to be frank, the current framing of Western Civilizations is a white history. It is a history where we learn about the constant subjugation of racial minorities, and it is a history where racial minorities do not see themselves represented aside from being victims of subjugation.

Shepard also argues that “the rights of all Americans were derived from the Western theory of government and man discussed before. Hence every American’s rights are well covered by an understanding of the philosophy of Western Civilization.” This is a presumptuous leap to make. Shepard argues that the foundation of our government inherently presumes equality before the law, when historically, that clearly has not been true. He then acknowledges that Western Civ is “also a study of the march of a people toward acknowledgement of equality under the law,” but refuses to acknowledge that much of the march for equality before the law occurred in opposition to the “Western” institutions that served to suppress the rights of racial minorities (this opposition includes movements like the Black Power movement, and individuals like Malcolm X who were self declared communists. Clearly, strong communist roots oppose traditional Western ideals of classical liberalism. We may not support communism- I, personally, do not. However, to quote Shepard himself, “refusing to see that won’t make it untrue.”) To fail to study non-Western roots of the fight for racial justice is supporting an intellectually dishonest narrative that does not accurately depict the ideology behind the fight.

He ends by accusing the columnist of “divid[ing] American civilization into a thousand meaningless, unrelated, and unrelatable shards.” To argue that the bevy of civilizations from which our citizens originate are “meaningless, unrelated, and unrelatable” is to discount the fact that Americans do not only originate from Western nations. There is an assumption, additionally, that liberal democracy is equivalent to White, Western nations. India is the worlds largest democracy, accompanied by peers in Indonesia, Israel, and some West African nations. The goal of liberal arts education should be to create students who can sustain liberal self-government, but also who understand that the United States is not a homogenous society. That lack of understanding is what leads to racial oppression and superiority complexes. We are unique from the rest of the world in that while our government may have roots in Western philosophy, our population unequivocally does not have entirely Western roots. To understand how to serve a global population like the United States’, we must teach an accurate, fair, and complete history to our students. Teaching this fair look at history requires that we reach beyond simply the Western world to examine the roots of this country, its people, and its movements.