Once the excitement of being assigned my first interview subject wore off, I realized I now had the somewhat daunting task of starting to research my subject, 1999 alum Dominic Finney. I was hoping that there would be multiple hits once I searched his name on The Collegian and on the UR Scholarship Repository, but unfortunately, I didn’t have much luck. Each website only pulled up a couple of results, and gave me little insight into how Dominic Finney spent his four years at UR, aside from some of the organizations he was involved in on campus and what he majored in. A Google search returned his LinkedIn page, which gave me a bit more information about what he had been up to since his time as an undergraduate, which included returning UR for both a master’s degree as well as a certificate from the School of Professional and Continuing Studies. Still, I was left with many questions about what Dominic’s life as an undergraduate at the University of Richmond was like. Clearly, I was going to have to shift my focus from being solely on Dominic and instead to different sources that would point to the more general atmosphere on campus.

In doing so, I started to look at attitudes toward the LGBT community during the 1990s, as to my knowledge, Dominic is the first LBGT alum being interviewed for the project. Through searching The Collegian archives, I found two articles from 1991 which gave me insight into how the UR community felt about the LGBT community, despite being published a few years before Dominic came to UR. The first article, “That’s What You Think”, part of the Collegian series by the same name, posed this question to UR students: “How would you feel about a gay/lesbian/bisexual student organization on the UR campus?” All five respondents refused to actually answer the question, instead avoiding the question with answers like “Uh, wow. That’s a tough one.” In addition, unlike other articles in the series, there were no photos or names of the students who responded, with black boxes in place of where the photos would usually go and each student simply labeled anonymous. Similarly to the “That’s What You Think” article on race published two years prior, UR students proved themselves incapable of engaging in meaningful dialogue surrounding the treatment of marginalized groups on campus, a trend that seems to continue today. 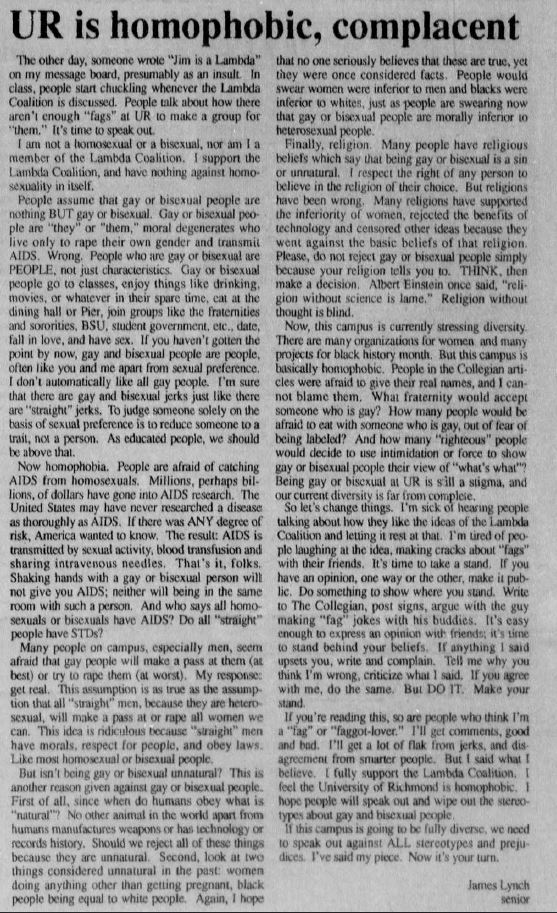 The second article, “UR is homophobic, complacent”, was written by a cisgender, heterosexual student named James Lynch, but sharply critiques the culture toward LGBT individuals and their organization, the Lambda Coalition. In the article, Lynch writes “What fraternity would accept someone who is gay? How many people would be afraid to eat with someone who is gay, out of fear or being labeled?” The questions Lynch poses reveal the tendencies of heterosexual UR students to avoid interacting with LGBT students. These two articles gave me a good frame of reference for understanding the closed-off student attitudes toward the LGBT community. Moving forward and looking into articles that were published during Dominic’s time at the University, I found information about the group Safe Zone, which began in 1996 for faculty, staff, and students who wanted to support LGBT students at UR. Since it was implemented during Dominic’s time on campus, I wondered if it impacted his experience in any meaningful way, and was able to add that to my list of questions for my interview with him.

While I felt that the articles I found were good additions to my research in preparation for my interview with Dominic, I was disappointed to realize that upon reflection, none of these articles acknowledged the intersections between race and sexuality. Moving forward, I hope to tease out information on what it was like to be both a student of color as well as an LGBT student at UR. Through my interview with Dominic, I hope to gain a clearer picture of his life experiences that were not reflected in the archives.

One thought on “Finding Life in the Archives”