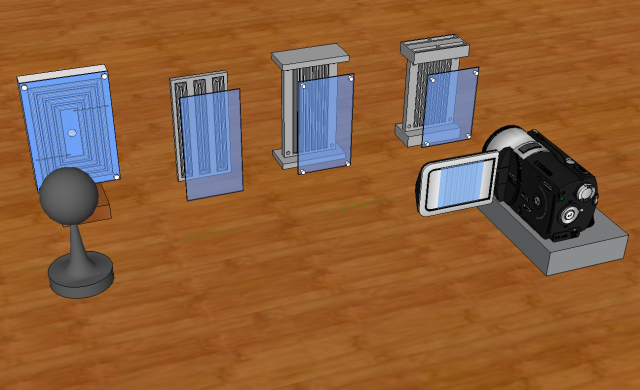 Professors Ovidiu Lipan and Laura Runyen-Janecky approached the CTLT with the idea of developing a new fly experiment for introductory science students in the Integrated Quantitative Science course in which students would study the locomotion of various ages of a particular fly.  We began researching and developing some options for a device to use in the experiment, guided by the fact that there is nothing commercially available for their application and that the university does not have a machine shop available for this.

Among the specifications were things like the device needing to allow simple loading and unloading of the flies, controlling the flies from escaping, allowing reproducibility and multiple trials for the experiment, permitting video recording of the experiment for analysis, backlighting the device to allow better contrast for data acquisition, and being able to mark the device for “start” and “finish” lines.

Over the next couple months, we developed a few prototypes in Trimble SketchUp and discussed the virtual designs.  We then proceeded to make physical prototypes using the CTLT 3D printers (Solidoodle version 2 and version 3 printers).  During this phase, the CTLT also learned how to improve accuracy of printing through experimenting with PLA plastic filament versus ABS plastic filament (PLA contracts less as it cools after printing which allows for better printing precision, necessary for fitted parts).

After the last prototype proved successful in testing with flies early in the summer, the CTLT then looked at fabrication options for creating 10 of the experimental setups.  For printing the pieces through Shapeways, a popular online 3D printing service, and assembling the devices locally, we determined that the cost would be $2310 (see table below).  We then calculated the cost for doing the 3D printing ourselves on our 3D printers to be $137 or about 6% of the online cost.

These numbers are for the final pieces.  However as mentioned above, we experimented with the design and went through about 3 physical prototypes.  These prototypes would have each cost about $120 for testing and would have taken 3-5 days for turnaround time, adding that on to the development time that we had used.

We admit that this is not a complete story about costs.  Obviously, we are not including the costs of staff time (although the bulk of the CTLT time was done off the clock and the rest is considered aligned with the goals of effectively integrating technology into teaching and learning).  Further, this was not an exhaustive cost analysis.  We did not research the costs for traditional fabrication for such a device.  Of course factory mass production would be too expensive, but there are “traditional” machine shops (without 3D printing) that could probably make these devices incorporating most of the aforementioned specifications.  However, in our experience with outsourced research instrument design, we believe the hourly rate of a machinist’s time would be enough to make this unfeasible as well.

We proceeded to print the pieces in the CTLT and acquire the additional parts to assemble the devices.  The time required to print the 10 FlyTracks and 20 FlyTrack bases (10 devices) came to 110 hours.  Luckily, very little of it required human attention.

The final design is available from Thingiverse to allow other schools and individuals to use and/or evolve the design. Prototypes (earliest on left side)

This entry was posted in @UR, Design, Printing, SketchUp. Bookmark the permalink.