Update: See updated design and photo of the prototype that can automatically feed at the end of this post (I have not yet tested heating).

As much excitement as there is around the 3Doodler kickstarter project, it turns out that there is some prior art vis-à-vis a thingiverse project by donutman_2000 .  To that end, I figure we might as well get into the mix.  I will be taking some left over parts from past 3D printer projects and putting together a 3D printing pen/gun similar to donutman_2000’s design.  Here is the basic idea as mocked up in SketchUp: 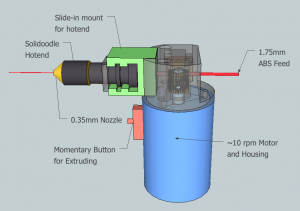 Starting at the bottom, there is a blue motor housing to surround a 10 rpm motor (I estimated that the slowest we would want the motor to turn is 5 rpm and the fastest would be about 30 rpm.  This is based on the relative geometries of the feed plastic and extrusion nozzle and gear ratios).  There is a momentary switch (red) that would be used like a trigger to extrude the plastic.  Above the motor is a toothed spindle (yellow) that we purchased from qu-bd.com for our Thing-O-Matic printer. Behind the spindle gear is an orange bearing box holding an idler bearing which will force the plastic filament into the spindle gear.  The black and gold hotend (left side) is from a backup hotend purchased from solidoodle.com, and the hotend will slide into the mounting bracket shown in green.  To the right of the mounting bracket and above the blue motor housing is the translucent gray housing to hold all the components together and guide the plastic filament into the unit.

I still need to work out exactly how the idler bearing will be adjusted, and I need to figure out the details of the switches and wiring (I should also have a double pole double throw (DPDT) switch to allow the extruder to reverse and nothing is figured out on the extruder heating circuit). 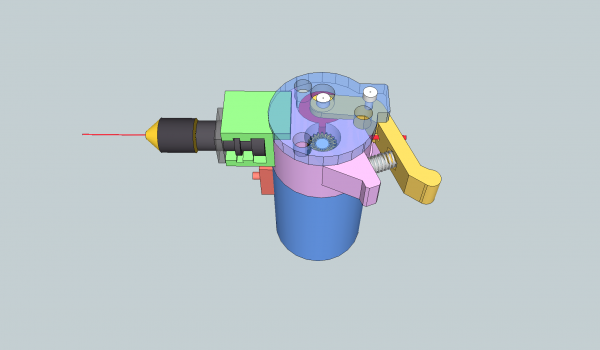 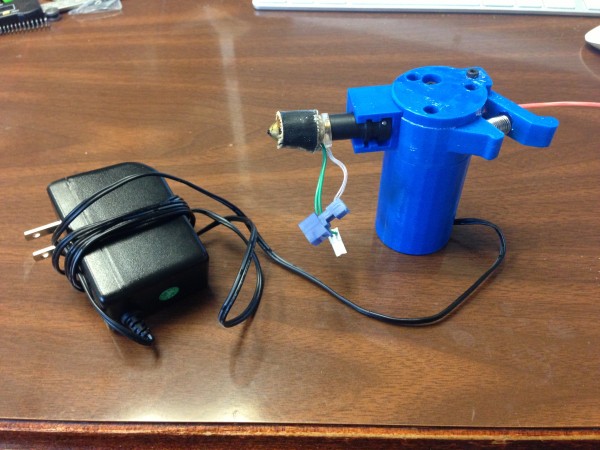 This entry was posted in @UR, Design, In the News, Printing, SketchUp. Bookmark the permalink.