The Human Brain on Cannabis

The first time I was exposed to cannabis I was ten years old and walking with my dad back to our car in a parking garage in downtown Richmond. As we walked into the garage I was greeted by a wall of an overwhelming smell, and I promptly blurted out loud that I hate the smell of skunk. As I said these words out loud, I noticed I was being shot a death glare by a group of people in the corner. Once we were in the car, my dad explained that I was smelling weed, a drug that people smoke to “get high” and something I should never do, under any circumstance. Fast forward to 2022, I am a rising senior at the University of Richmond in Virginia, a state where cannabis has been decriminalized. According to the NIH, 44% of college students reported using cannabis in 2020, a number that is likely to increase as the trend of legalization continues. This number, 44%, does not shock me at all, and if anything feels like an underestimate based on my peers. There is no disputing that cannabis use is going to continue to increase in popularity. Yet, I worry that many of my college aged peers, myself included, are swept up in the politics of cannabis and do not actually understand the science behind the effect of cannabis on the brain. In this blog post I am going to provide a brief and factual overview of how cannabis affects our brains. There is obviously significantly more research on this topic than can be discussed in one blog post, but hopefully this overview can provide basic background information to help us all make informed decisions regarding how we want to approach this newly decriminalized substance.

How do neurons work?

To begin a scientific discussion of the effects of cannabis on our brains, it is important to first establish an understanding of basic neurobiology. Our brains are the command centers that control most everything that happens in our bodies, and they do this mainly via neurons (nerve cells). Neurons are specialized cells that communicate with each other and with other parts of the body through electrical impulses called action potentials and chemical messengers called neurotransmitters. The biological and chemical process by which neurons communicate is one of the most complicated aspects of human biology, but the basics are relatively simple. The diagram below illustrates this process, but essentially an electrical signal called an action potential propagates through a neuron, and once the signal reaches the axon terminal (the end of the neuron) it triggers the presynaptic cell to release neurotransmitters into the synapse, the space between two communicating neurons. The neurotransmitters will then attach to specific receptors on the receiving neuron (the postsynaptic cell). The neurotransmitters briefly bind to the receptors and this can either inhibit or excite the postsynaptic receiving neuron, meaning that it can either decrease or increase the action potential that will be fired by the postsynaptic neuron. It is important to note that it is the receptor, not the neurotransmitter, that most of the time determines whether the receiving neuron is inhibited or excited (whether the electrical action potential, and therefore communicating power of the neuron, is decreased or increased). 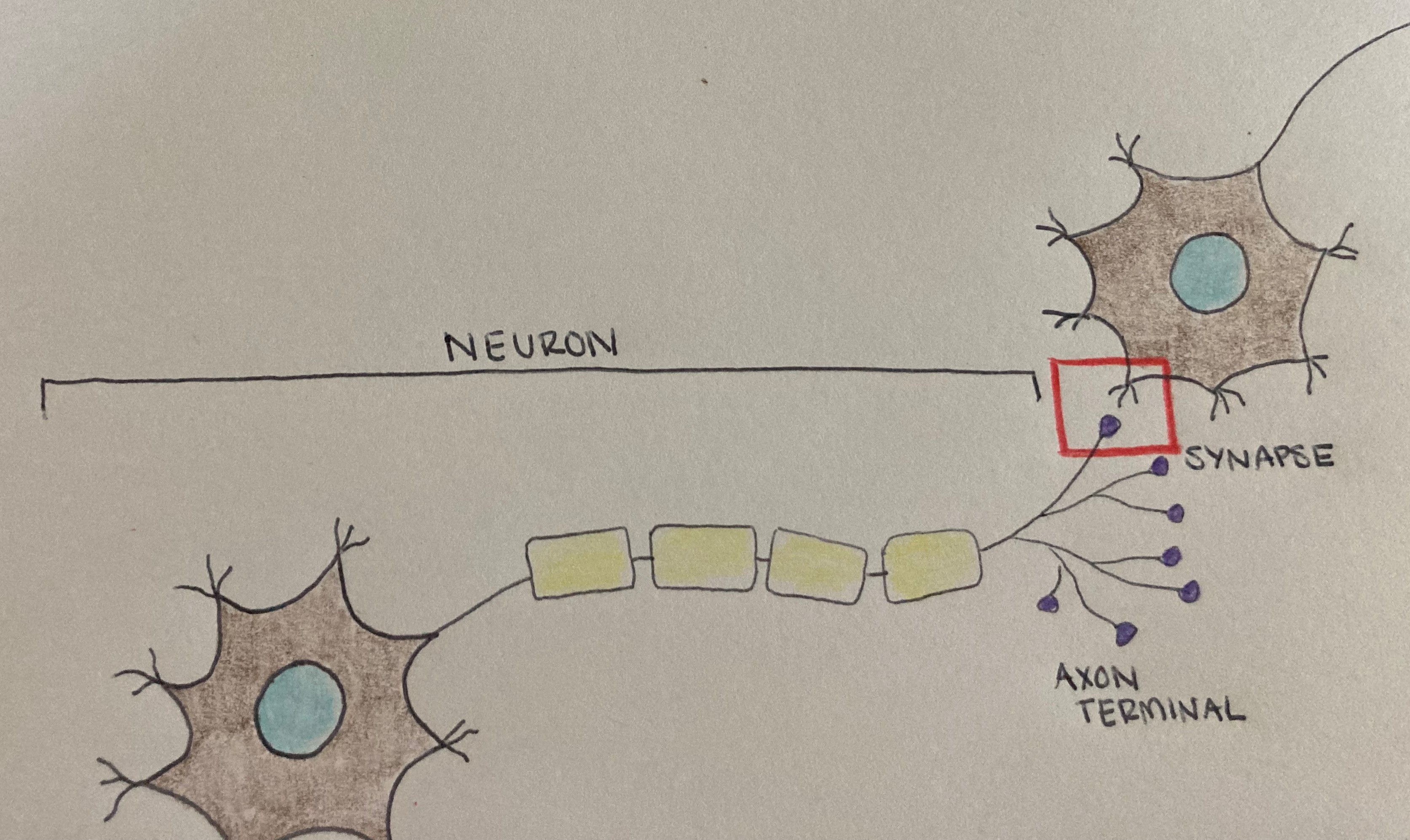 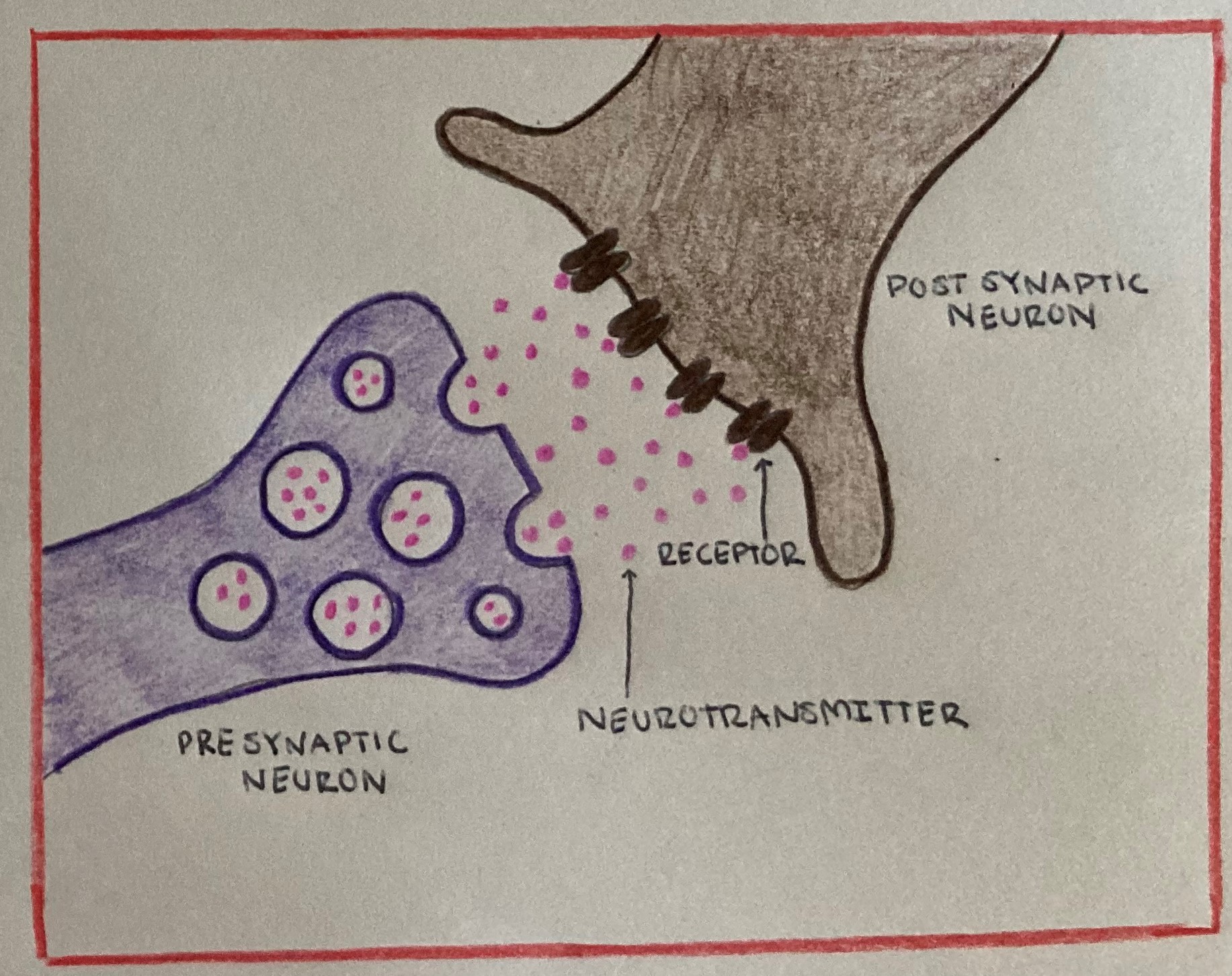 Why is the endocannabinoid system important?

There are various neurotransmitter systems in our bodies that play a myriad of roles, but the system we are going to focus on today, and the system that is most relevant to a discussion of cannabis, is the endogenous endocannabinoid system. Endogenous simply means that the cannabinoids that participate in this neurotransmitter system are synthesized within the human body. The endocannabinoid system (ECS) is a neuromodulatory system composed of various cannabinoid receptors and endogenous cannabinoids (a type of neurotransmitter) that bind to these receptors. The roles of the ECS include regulating parts of the central nervous system and modulating learning, memory, emotional processing, inflammation, immune responses, etc. Interestingly, recent research has also suggested that disruptions in the function of the ECS is associated with high incidence of psychiatric disorders, specifically schizophrenia and psychosis.

The two most well researched endogenous cannabinoids are anandamide and 2-arachidonoyl glycerol (2AG), both of which are lipid (fat) derivatives (their precursors are present in lipid membranes in cells). The two main endocannabinoid receptors are CB1 and CB2, both of which fall in a class of receptors called G protein coupled receptors. Both anandamide and 2AG are agonists on both of these receptors, meaning that they increase signal transduction when bound to the receptors on the postsynaptic neuron. However, all agonism is not created equally, and 2AG appears to be a stronger agonist of both receptors than anandamide. In summary, the endocannabinoids activate the CB1 and CB2 receptors and as a result increase neuron signaling and modulate countless physiological functions in our bodies ranging from emotional regulation to immune responses. It is also worth noting that CB1 and CB2 receptors are expressed in different concentrations on neurons in different locations in the body, with CB1 being most abundant in the central nervous system while CB2 is less abundant in the central nervous system and more abundant in organs involved in immune function. However, CB2 receptors are still found in the brain and hypothesized to contribute to certain psychiatric disorders, including addiction.

What does all of this have to do with cannabis and how it affects the human brain?

The cannabis plant produces over 100 cannabinoids, as well as other non cannabinoid molecules that contribute to the taste, color, and possibly the psychoactive component of the plant.  There is not enough research to understand the effect that all of these cannabinoids have on the human body, however, scientists have discovered that the primary active cannabinoid in cannabis, the molecule that elicits the “high” associated with cannabis use, is a cannabinoid called THC, short for delta-9-tetrahydrocannabinol. The scientific community is also beginning to focus research on another cannabinoid present in the cannabis plant, CBD, specifically related to its therapeutic properties. However, in this post we are going to focus on THC due to the role it plays in achieving the high associated with cannabis use. THC is produced naturally in the leaves of the cannabis plant and is not produced in the human body. The chemical structure of THC is biologically similar to that of the anandamide and 2AG endogenous cannabinoid neurotransmitters discussed above and shares the biological ability to agonize CB1 and CB2 receptors (see chemical structures below). Therefore, when THC is present in the body (due to cannabis use), it will bind to the CB1 and CB2 receptors and modulate unintended physiological functions. Essentially, THC activates neurons with CB1 and CB2 receptors when in normal conditions they would not be as activated. Any of the myriad of functions of the endocannabinoid system, much of which we still don’t understand, are affected by the agonistic properties of THC on the CB1 and CB2 receptors. Because THC is exogenous and not endogenous, it comes from an outside source, our body has no way of regulating how much of this compound we want interacting with these crucial CB1 and CB2 receptors.

As I mentioned above, scientists do not fully understand all of the physiological functions affected by THC agonizing CB1 and CB2 receptors at levels much higher than the natural homeostatic state in humans. This is a rapidly growing area of scientific research, especially as cannabis use increases. In the remainder of this blog post, I am going to briefly discuss just one of many of the physiological effects of increased CB1 and CB2 activation by THC: its effect on reward processing and the dopamine system.

How do people get addicted to cannabis?

Depending on how cannabis use disorder is defined, scientists estimate that between 10-40% of regular cannabis users will develop some sort of cannabis use disorder, or addiction, in their lifetime. So how does this happen? Clinical addiction is directly tied to the dopamine system. The dopamine system is another neurotransmitter system in the human brain that is involved in reward, pleasure, and addiction processes. The endocannabinoid system is involved in reward processing and therefore addiction in our brains due to interactions with the dopamine system. To simplify a very complicated process, dopamine neurons are activated when we experience pleasure, and as a result the dopamine neurotransmitter is released from dopamine neurons into a part of the brain called the nucleus accumbens (NAc). THC, as well as other drugs of abuse, all increase dopamine levels in the NAc. Dopamine, as mentioned above, is a neurotransmitter associated with pleasure and the increase of NAc dopamine caused by THC provides an almost euphoric feeling to cannabis users. This increase in NAc dopamine when under the influence of cannabis wires the brain to form an addiction to the euphoric feeling of cannabis use, causing the user to exhibit addictive behavior towards cannabis.

Where is the line between positive and negative effects of cannabis use and where do we go from here?

THC’s effect on dopamine and the reward system is just one of countless consequences of increased CB1 and CB2 activation in the endocannabinoid system. Some of these consequences, such as addiction, are decidedly negative (however, it is worth noting cannabis is far less addictive than opiates and many other drugs of abuse). On the other hand, other consequences, such as the potentially anxiolytic effects and pain masking effects, can be therapeutic. There is significant research in the scientific community about the numerous and promising medical and social benefits of cannabis use. However, there is a lot more we need to understand about how cannabis affects our brains, and even though the US is in the process of riding a wave of legalization and a cultural resurgence of cannabis, it is important to remember how little we actually know about what exactly cannabis does to the human brain.