As we continue to live through the deadliest global pandemic in modern history, there is an increased awareness about mental health issues triggered by fear, grief, and isolation. Yet, what people often overlook, is that our mental health also depends on our biology.

All of the genetic instructions in our bodies are stored in our genes (sections of our chromosomes which are composed of DNA). Our genes essentially act as codes which our body can read and subsequently use to produce proteins. Some of these proteins, called enzymes, catalyze the chemical reactions of our metabolism.

When we talk about metabolism, we are simply referring to the way in which compounds such as fats, carbohydrates, and proteins are processed and utilized within our bodies. Basically, metabolism is what allows us to convert everything we eat and drink into energy. Each metabolic transformation (the conversion of one molecule to another) that makes up human metabolism is catalyzed by a unique enzyme which is coded for by a unique gene.

However, problems arise when there is a mutation in the gene that codes for a specific enzyme. Just one tiny mutation in the DNA sequence of the gene can result in the body producing a defective enzyme. 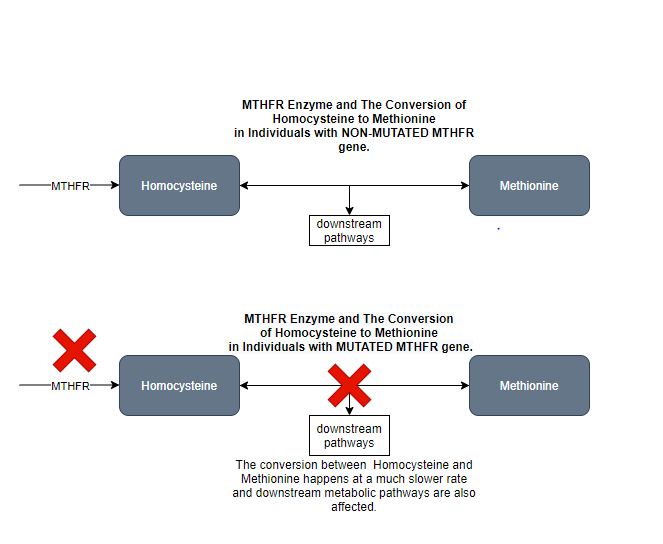 So how does the MTHFR enzyme relate to mental health? There is significant research citing a connection between a deficiency in the MTHFR enzyme caused by a mutation in the MTHFR gene and increased prevalence and risk for psychiatric disorders such as schizophrenia and major depressive disorder. The science related to this connection is still being investigated, but preliminary research indicates that defective MTHFR enzymes cannot synthesize Methionine as frequently. Downstream, this has significant effects on the function of other metabolic pathways. An example of this that is currently being investigated by the medical community is the connection between MTHFR mutations and resulting changes in downstream pathways that result in the body reading genes that are not normally read. The unintended reading of these genes leads to the production of corresponding proteins that increase the risk and severity of certain psychiatric disorders. However, there are still significant questions about the exact mechanisms of this process.

Regardless of the exact mechanism, people who have a mutation in the MTHFR gene and therefore defective forms of the MTHFR enzyme have been shown to have a higher prevalence of psychiatric disorders. There are 34 known MTHFR mutations that can occur in humans, which result in MTHFR enzymes that range from being almost as effective as the wild type (non-mutated) to significantly less effective (for example, an enzyme that is 25% as effective as the wild type). The prevalence of MTHFR mutations of all severities in the general population could be as high as 40%, with the highest prevalence in those of Hispanic and Mediterranean descent.

Studies around the world have investigated the connection between MTHFR mutations and psychiatric disorders. I am going to summarize (briefly) findings specifically about schizophrenia and major depressive disorder. However, it is worth noting that other connections including increased risk of certain cancers, heart disease, autism, bipolar disorder, ADHD, anxiety disorders, etc. due to MTHFR mutations are currently being investigated by the medical community.

Studies of patients with schizophrenia have indicated that those with the MTHFR mutations that cause the most significant change in the effectiveness of the MTHFR enzyme have a higher risk of schizophrenia than those with less problematic mutations and those with the unmutated wild type. An analysis that included 38 studies indicated that this connection held true across African, Asian, and Caucasian ethnic groups. It is also worth noting that one of the possible mutations appeared to have a much stronger association with schizophrenia in male populations as opposed to female, probably due to the neuroprotective properties of estrogen. Finally, a recent study indicated the MTHFR deficiency in pregnant women resulted in a higher schizophrenia risk in their children.

While focusing on just one enzyme out of the approximately 1300 different types of enzymes in each human cell may seem oddly arbitrary, this research is crucial in furthering the treatment of psychiatric disorders and the development of more specific antipsychotic drugs. Unfortunately, reversing a genetic mutation is not currently possible, however, other clinical treatment options for MTHFR related psychiatric cases are being developed. For example, there is promising research emerging indicating that specifically formulated folate supplements can reduce the unintended reading of certain genes (a downstream effect discussed above) and therefore can decrease the severity and risk of certain psychiatric disorders in people with the MTHFR mutation.

My hope for the future is that we begin to realize the nuanced balance between both biology and environment and nature and nurture when it comes to mental health. And in fully embracing this duality, we can develop treatments that effectively address both.
– Hannah Parker