Since the discovery of penicillin, you know that drug that was accidentally discovered by eating in the lab, the majority of illnesses caused by bacterial infections have been able to be treated by compounds.

These compounds are called antibiotics. There are many different classes of antibiotic drugs each targeting a specific function of a bacterial cell. Penicillin, for instance, is considered a cell wall inhibitor because it prevents the proper functioning or creation of the bacterial cell wall. It finds a slot in the cell wall which prevents the molecules from connecting properly. This causes the cell wall to burst which means the inside of the cell is no longer being protected. Think of it like building a wall of square blocks, but instead of a square block a triangle is inserted. That wall may stand for a little while, but any force will cause it to fall. After the cell wall bursts, the cell dies, which means your body can start to recover from the infection. Unfortunately, the cell can develop or intake mutations into its DNA and become resistant to the antibiotic. 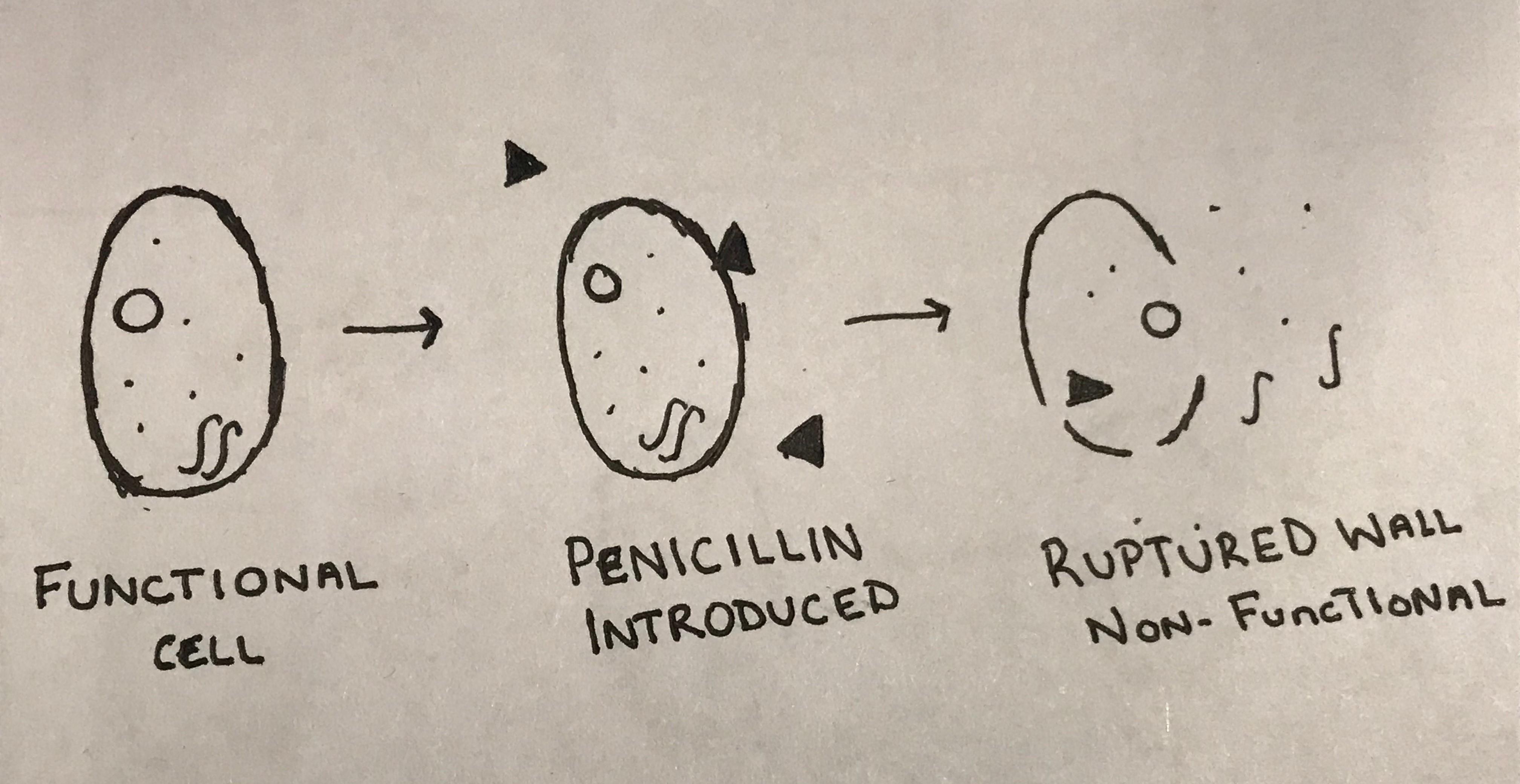 Like all organisms, in a population of bacteria there will be a couple organisms with mutations in their DNA. Think about people who have albinism; in comparison to the large population of humans on Earth, the number of people with albinism is relatively small. That number will stay small unless it becomes evolutionarily favorable.

If this bacterial infection is transferred to someone else, they now have an infection that is resistant to a class of antibiotics. Mutations in bacteria can be a spontaneous event or can be transferred by plasmids which are independent circular forms of DNA. Bacterial cells in nature randomly pick up plasmids, some of which hold multiple resistant genes. If bacteria end up having resistant to multiple classes of antibiotics they become superbugs. You may have heard of these superbugs in the news.

Superbugs are harder to kill because they now have multiple resistances encoded in their DNA. One class of antibiotic is no longer effective and in most cases a drug cocktail has to be used. To prevent this, it is best to take the entire cycle of antibiotic prescribed. This is not a catch all preventive, you can still contract superbugs like Methicillin Resistant Staphylococcus Aureus (MRSA). Strains like this are not well controlled by antibiotics and require alternatives methods unearthed by research.

Research continues on how to inhibit the mutations occurring in bacteria that decreases antibiotic effectiveness. Our research in Pollock lab works to isolate a protein, originally from a plasmid, important in antibiotic resistance. Our goal is to identify compounds that could inhibit the activity of the protein and lead to antibiotic potentiation.