Fair warning — this is going to be a long post.

Earlier this month, I traveled with 7 of my research students to Augusta, Georgia for the 70th annual Southeastern Regional Meeting of the American Chemical Society. I gave a talk and they all did posters. We listened to interesting talks, ate good food, and enjoyed the time outside of Richmond. As is traditional for my lab, I gave the students an assignment to write up their favorite talk. See below for their analyses and pictures of our time in Augusta. Also, note the similarities in some of their favorite talks and reasoning (is it because I’ve mentored them similarly or because I attract similar students to the lab?) 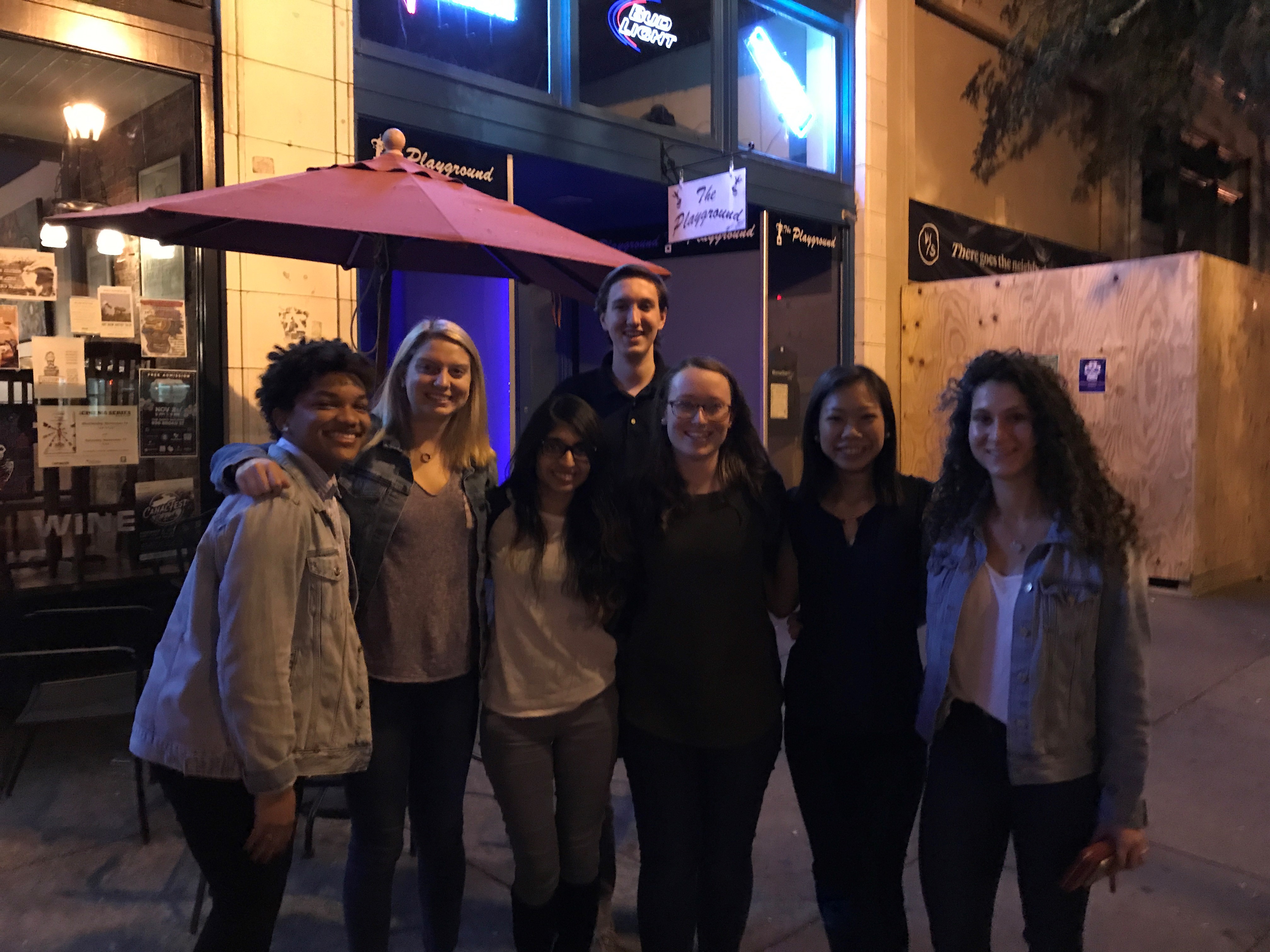 My favorite talk at SERMACS was given by Dr. Sarah Zingales from GSU Armstrong. I decided to attend because of the catchy title “Can licorice cure cancer?”, and it turns out this was exactly Dr. Zingales intent: to attract undergrads to her talk. She teaches at an undergraduate institution where she is passionate about helping students develop a similar interest in research.

Her research is in medicinal chemistry, where she utilizes techniques from organic chemistry, biology, and biochemistry. Her group designed and synthesized a library of chalcones, which are natural products produced in plants that have shown anticancer and antibiotic properties. Anticancer assays were run on the novel chalcones against 60 human cancer cell lines, and antimicrobial assays against seven kinds of bacteria. Her group found that their chalcone variation 3d showed growth inhibition greater than 60% against five cancers, including leukemia and breast cancer. Three other chalcones were active or partially-active against a few cancers. 3b and 3f showed activity against a variety of bacteria, and 3f and 3e demonstrated growth inhibition against some fungi.

I enjoyed listening to the narrative told by Dr. Zingales as she described her experiences navigating the ups and downs of her projects. She heavily emphasized the collaborative aspect that lies within research and how working with others makes for a lifetime of learning and self-improvement. Aside from hearing about cool medicinal chemistry research, her enthusiasm and passion reminded me why I am so lucky to attend an undergraduate institution that allows so much opportunity in research. Thanks Dr. Pollock and Dr. Nolin for the mentorship and great SERMACS experience! 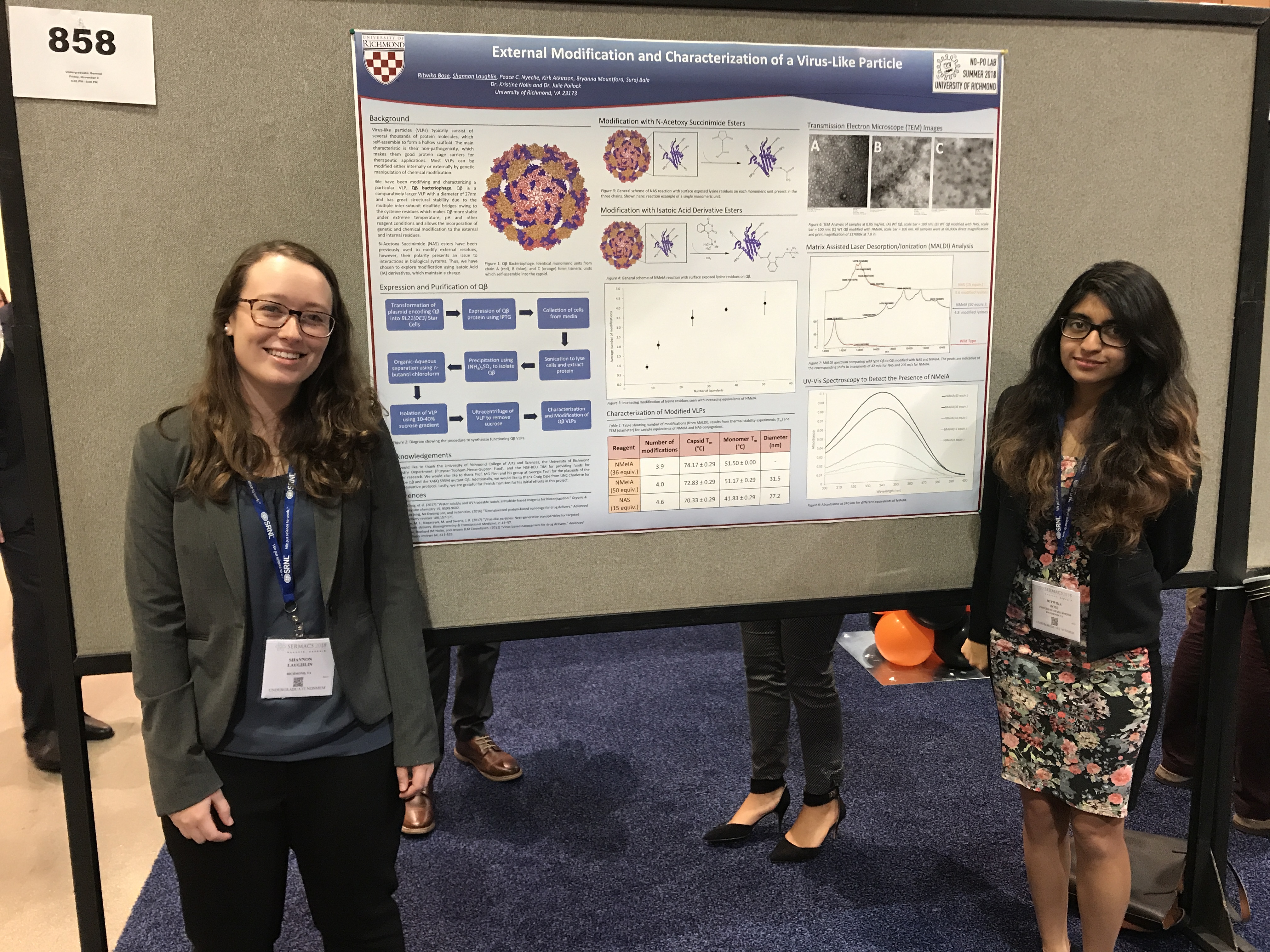 Rachel Cooke from Furman University talked about her research of converting glycine derivatives to generate nucleoside derivatives. Using Hydantoin derived from Glycine and Cyanine, she managed to create orotate and thio-orotate, which I later learnt, essentially look like versions of pyramidines, but with an acetyl group attached. This part was useful, as their overall goal was to be able to synthesize actual nucleosides outside the body, in prebiotic conditions, BUT without the use of any enzymes.

This was my favorite talk for two reasons: 1) It introduced me to the idea of prebiotic chemistry, whose existence is still a mystery to me, and 2) this idea is surprisingly unexplored, and perhaps untapped.

Two other talks I found interesting were by Dr. Sarah Zingales (Georgia Southern University) who was testing the effects of naturally derived chemical compounds like curcumin and chalcones against antibacterial resistance as well as potential chemotherapeutic drugs, and Dr. Christopher Sibley (VT), who was screening variations on a known inhibitor of a sphingosine kinase involved in sickle cell disease and certain cancer. They both appeared to be employing similar ideas, and both emphasized the need to collaborate to get the best results and the need to present those results and the research in an interesting way in order to attract other researchers. 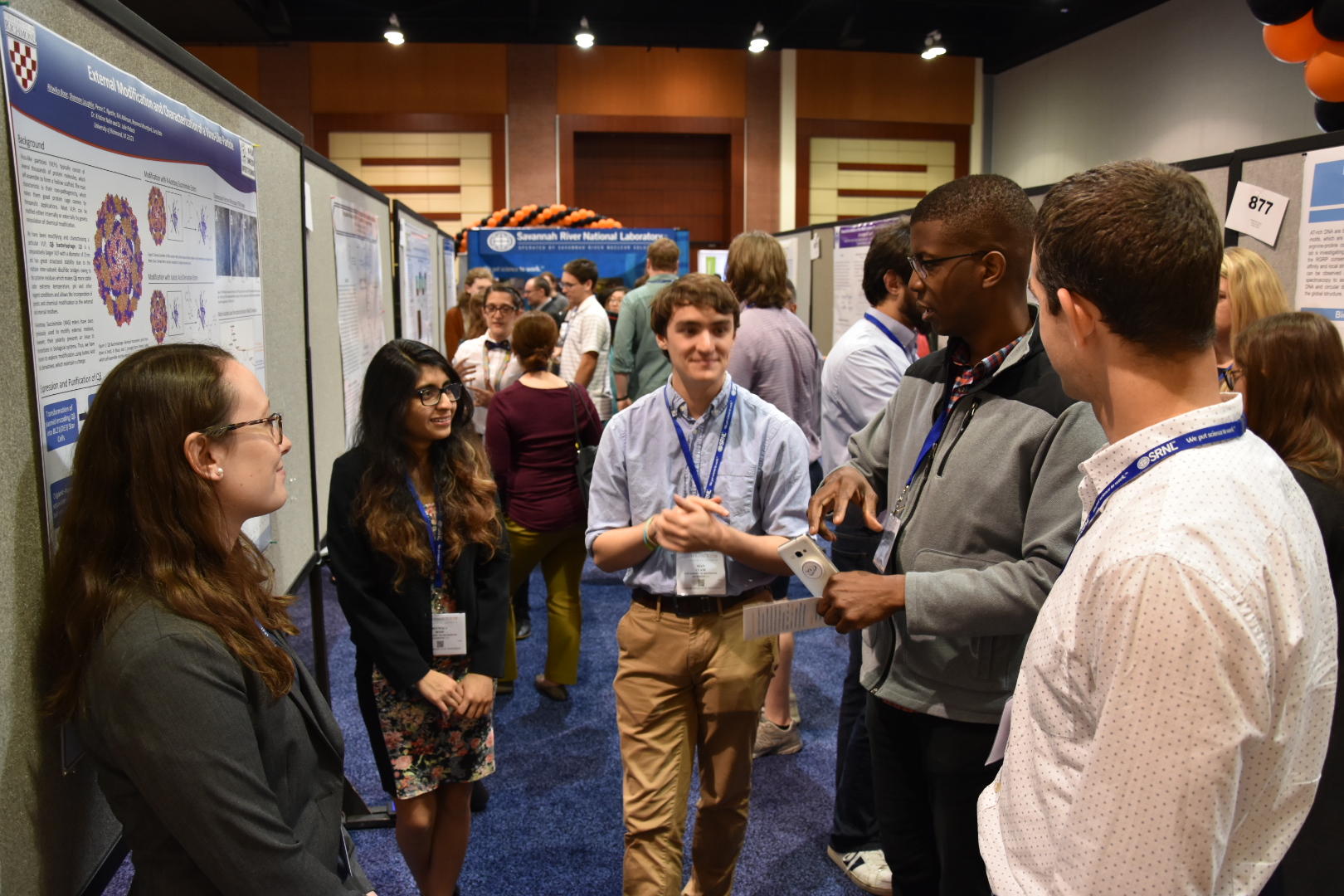 The title of my favorite talk at SERMACS was “Fast, safe and sustainable water purification using novel nanomaterials,” given by Abhispa Sahu. Small particles in water can negatively affect human health long-term. Sahu’s research dealt with synthetic nanomaterials – specifically single-walled carbon nanotubules (SWCNTs) – and how they could be used to effectively remove water contaminants. The SWCNTs have anion exchange nanoresins that use electrostatic interactions to target contaminants. The nanoresins could be successfully synthesized using green methods. Functionalized (SWCNTs) increase the diameter of nanotubes due to polymerization. A few factors that affected the kinetics of polymerization included the mass of the monomer, percent functionalization and polymer chain length. The carbon nanotubules had good adsorption capacity of the contaminants with removal between 95-100%. I enjoyed this talk because of the wide applications of this water purification technique. It can be applied domestically to the clean water crisis in Flint, Michigan. 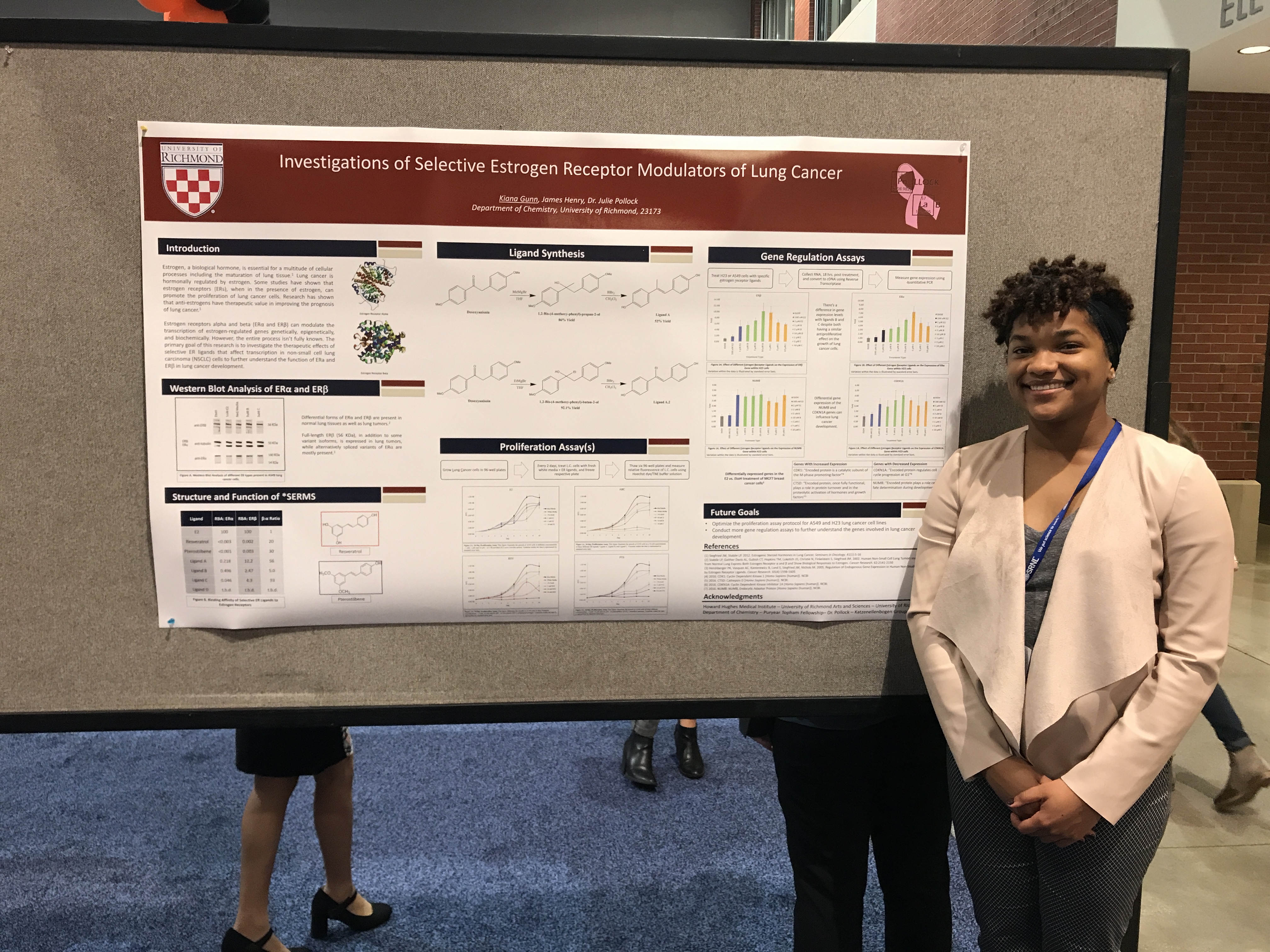 This was my second time attending SERMACS with Dr. Pollock and our lab.  The talks this year were all extremely interesting to the point where I ended up having to make tough decisions on what talk to attend.  However, my favorite talk from the conference came from a younger professor at Georgia Southern University.  What really drew me to this talk was her absolute enthusiasm for her research and her research students.  The research came out of Zingales lab at Georgia Southern University.  I was immediately drawn to this talk because her research focused on using natural products as a basis for their investigation.  They synthesized similar compounds to the natural counterparts, like licochalcone A, curcumin, resveratrol, and chalcones.  Using the compounds her lab synthesized, they set out to investigate if they could combat antibiotic resistance as well as develop new cancer therapeutics.  She was extremely upfront in saying that they did not have the best success with their project, however the areas of her talk that really appealed to me were her focus on her undergraduate students and her collaboration with others at her university.  She worked with mostly undergraduate students and she seemed entirely focused on training and teaching them on techniques rather than achieving any groundbreaking results.  In addition, to ensure that her students were learning as much as they could, she was willing to call on others to teach them and herself new techniques.  This talk was my favorite from the conference for this reason and because her attitude reminded me so much of Dr. Pollock.  She too is focused on her undergraduate researchers and is one of the most collaborative professors I have come across at the University of Richmond. 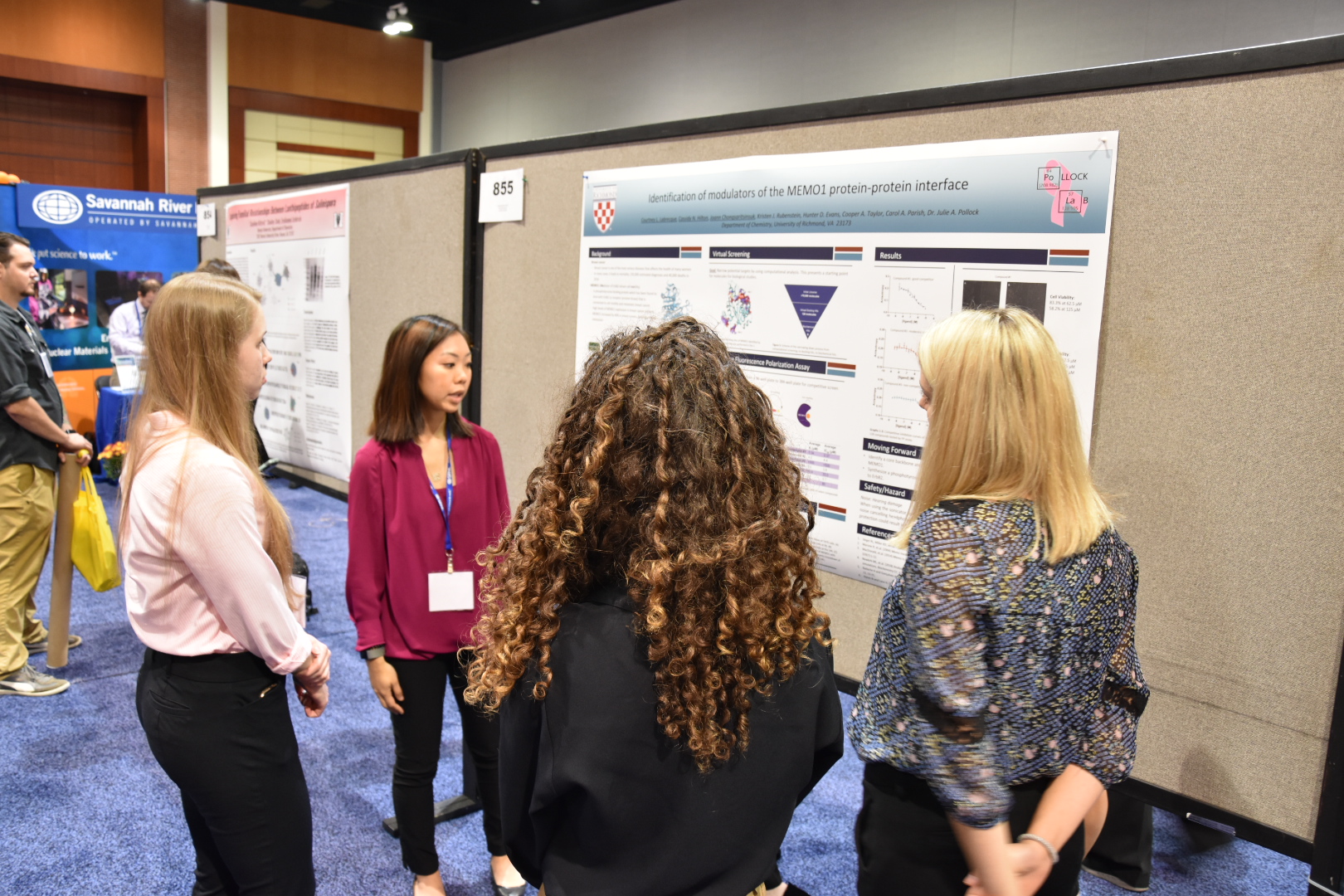 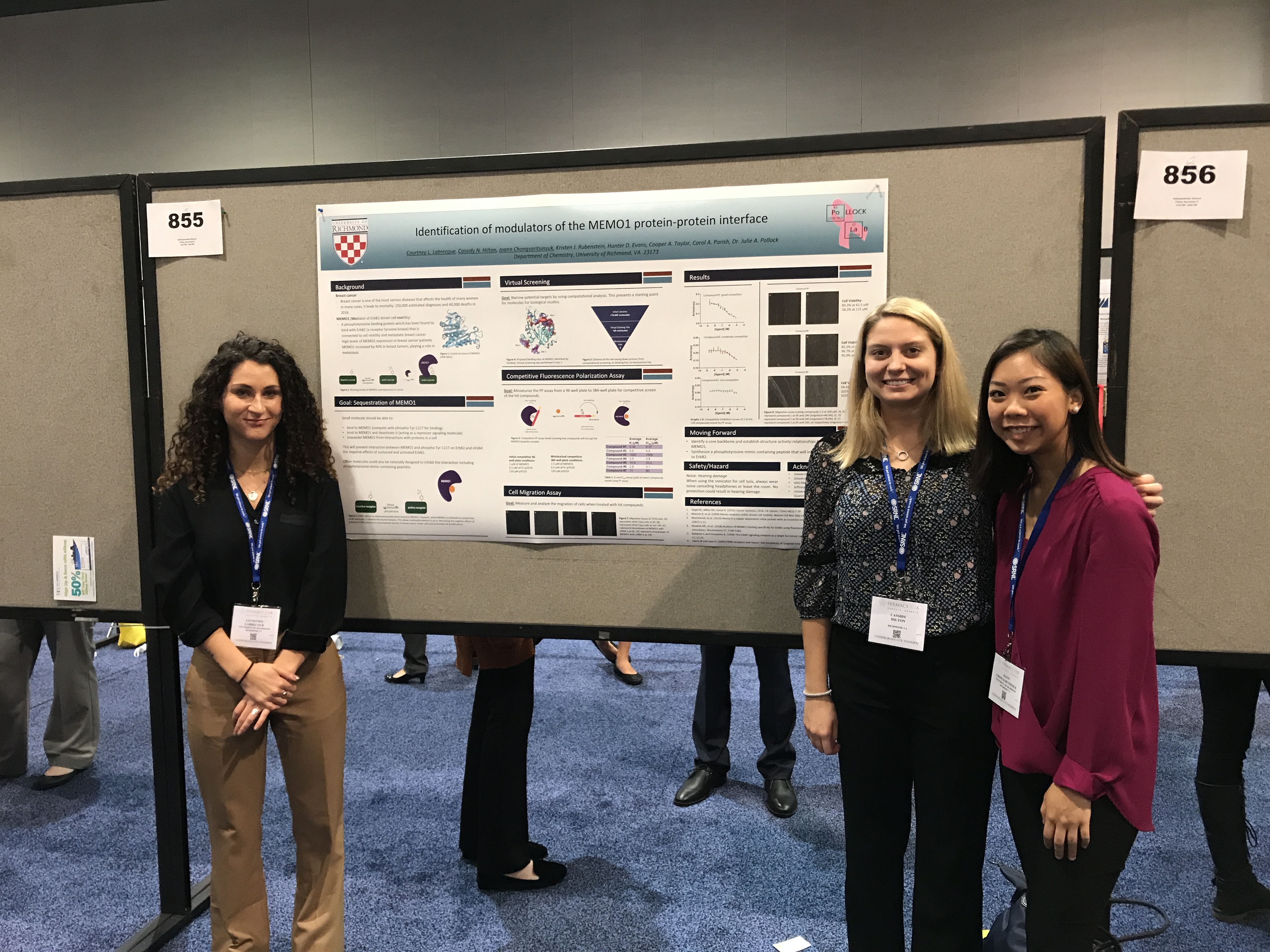 I had a great time presenting at SERMACS last weekend! It was my first time at a conference and presenting my research, “Identification of modulators of the MEMO1 protein-protein interface”. I went to many great talks and networked, but one talk that particularly stuck with me was “Assessing Potential Health Risks of Polymers in Wearable Devices” by Kurt Breitenkamp. His work focuses on looking at the health risks of wearable devices such as Apple Watches, Fitbits and even pacemakers due to the high risk of monomers and polymers found in the coatings. He said that his research and work is very interdisciplinary because he works with biology, chemistry and mechanical engineering to create a complete picture of how to regulate and make wearable devices safer to use. He even employs techniques such as GC-MS and LC-MS to determine the specific chemical substances found in polymers and monomers of the devices. In his work, he provides consultation to the companies that make the wearable device. In order to provide the best advice possible, he carries out multiple tests including: an immersion extraction and a diffusion test to determine the effects of the environment and solvents on the devices. The diffusion test provides a situation that is more similar to what would happen in real life but nevertheless, these assays allow him to determine the potential health and side effects of the wearable device in use. Overall, this was a great experience that allowed me to learn from other scientists and demonstrate all that I have learned through conducting research and I am so grateful to have gone! I look forward to going again in the future and continue expanding my knowledge through my research experience.

During my time at SERMACS 2018, I was able to attend a talk in the technical session section “Chemistry and Public Policy: Energy & Elections”. Tim Echols, a public service commissioner in Georgia and veteran energy regulator, delivered a talk about our energy future. He feels very strongly about keeping the earth clean and using sustainable energy. As an elected official, he took an interesting stance on the relation of our energy future and chemistry. He discussed many different aspects of sustainable energy, including solar energy, nuclear power plants, windmills, and even pointed out how cyber-security is important to our energy future. He focused on the nuclear power plant being built in Georgia and mentioned there were 7,000 workers at this single plant. This discussion opened my eyes to the diverse array of fields available to chemists in the world. 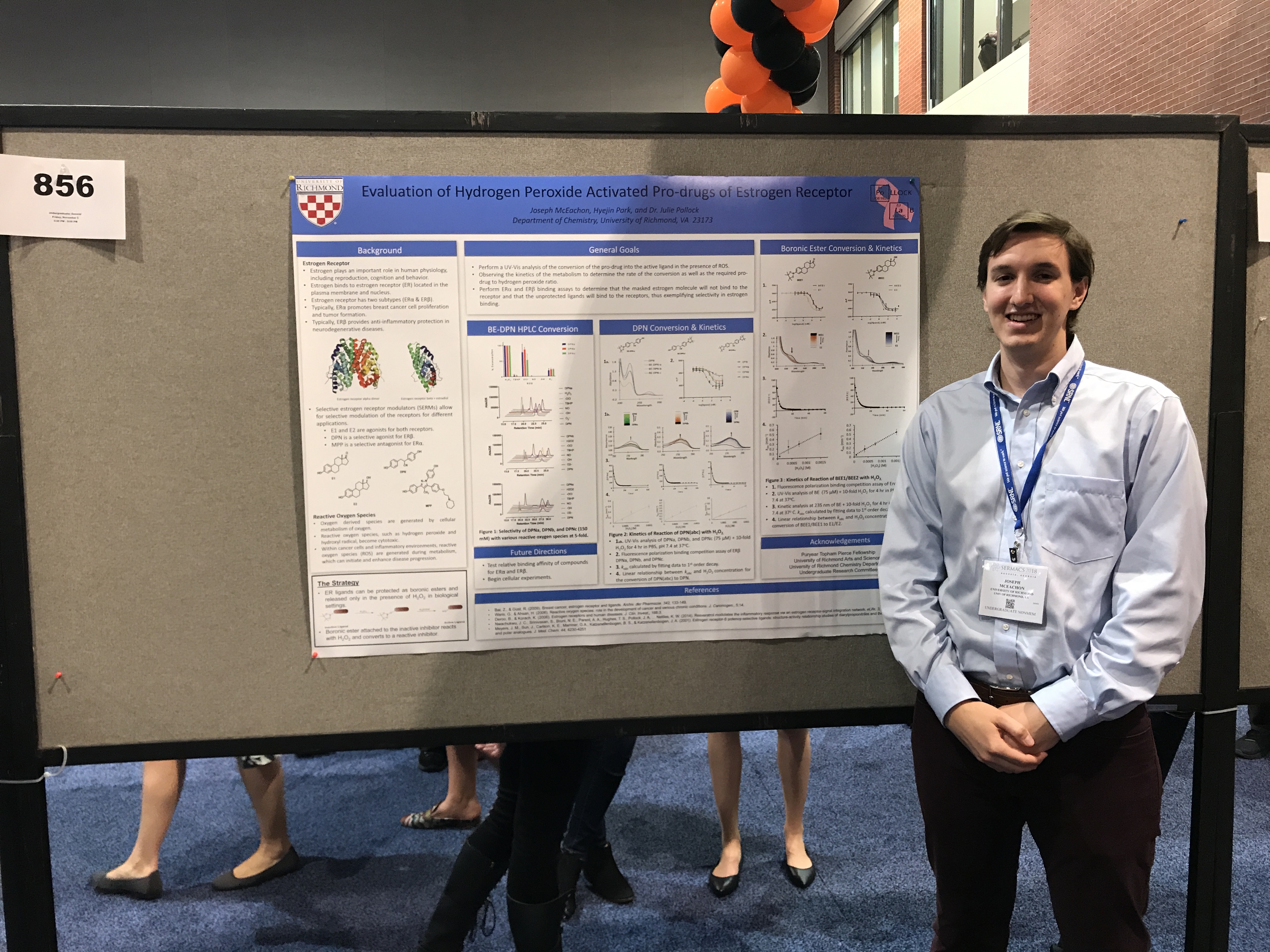 I found the title of the talk to be the main factor as to why I chose to attend. One of the first things that Dr. Zingales spoke about in her talk, was how in order to get undergraduate student interest in one’s lab, you need to hook them with flashy and interesting titles. She then proceeded to ask how many of the people in her talk were undergrads. To no surprise, it was about 80% undergraduate students. Furthermore, Dr. Zingales runs her lab with only undergraduate lab members. One of the things that I could sympathize with was the fact that she mentioned how it took her students 16 replicates in order to get 3 good replicates for IC 50 values, but stressed that this was ok. Dr. Zingales states that much of her inspiration comes from natural products such as curcumin and resveratrol for anticancer properties. Much of Dr. Zingales research centered around the formation of different chalcone derivatives. Her lab synthesized numerous chalcone derivatives through a one step aldol condensation with acetophenone and benzaldehyde as reactants. One of the focuses for her  research with her next generation chalcones is to create new types of antibiotics. Overprescribing, improper prescribing, and improper use of antibiotics had led to antibiotic-resistant strains of bacteria. Chalcones could be a new class of antibiotics used to treat infections. Multiple studies have shown that chalcones have antibiotic properties. Her chalcones were tested against Pseudomonas aeruginosa. The bacterial testing did not result too well and next, she focused on antifungal testing. Dr. Zingales states how it was exciting to learn to use blood agar plates and grow actual human pathogens on them. Dr. Zingales sent the majority of the compounds off to COADD to have her compounds tested in both gram negative and gram positive bacteria as well as for antifungal properties. Some “hits” were found, but overall not enough for them to continue more research.

Her next strategy was to design chalcones that are not antibiotics themselves but act as efflux pump inhibitors. One of the methods that she used to test the efflux inhibition was fluorescence polarization, which I also use. I found her method to be very interesting. First she would starve the cells, then she would “feed” them fluorescein so that that would be tricked into consuming it. Next she would give them glucose so that they wouldn’t be starving and could resume normal cell function thus restarting the efflux pump. This results in the dye being pumped out. During the step when glucose is given, they also give them the efflux pump inhibitor chalcone. When the chalcone is given, the dye is not released into the extracellular matrix.

As a result, licorice can cure cancer due to the fact that licochalcone A is a natural chalcone produced by the chinese licorice root. Overall, her research into chalcones has not been very promising and she is now focusing on curcumin and analogs of EF24. Overall this was my favorite presentation mainly due to the similarity between her lab and our lab. I also was able to understand much of what she was talking about and she was very engaging to her audience, often making jokes.