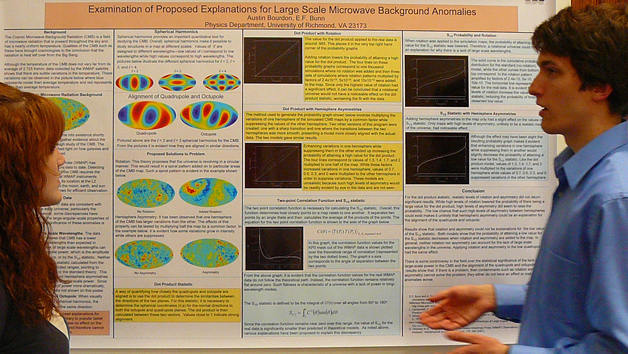 Last week all UR students doing original research had a chance to share their work with others at Richmond during the 2009 student symposium.  As usual, the physics department was well represented, with nine students presenting posters of their work, on topics ranging from cosmology to biological physics.  Afterwards, the Society of Physics Students organized “Sky Watch,” during which all of the symposium participants could get a taste of astronomy and see the night sky through telescopes. 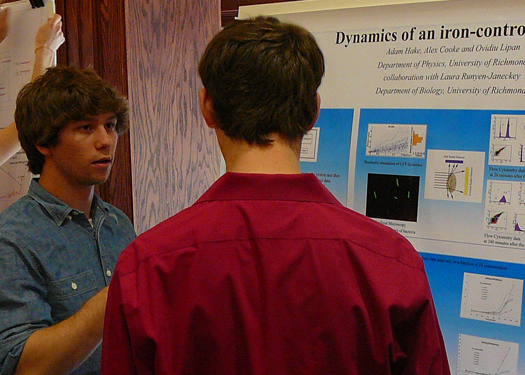 A couple of the students in Ted Bunn’s research group published papers recently on their research in cosmology.  You can find more details about their work in some posts on Ted’s  blog.

Junior Austin Bourdon and Bunn published a paper analyzing some puzzling results from the WMAP satellite.  WMAP is a NASA-funded orbiting telescope that has mapped the cosmic microwave background radiation in great detail. 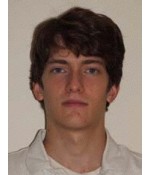 This radiation is the oldest light in the Universe and tells us a lot about conditions shortly after the Big Bang.  Some features of these maps appear inconsistent with the best theoretical models.  Austin and Bunn tried to search for alternative explanations.  The paper was accepted for publication in the journal Physical Review D.  Bunn wrote a bit more about it in this blog post, or if you really want the details you can read the paper. (Use the link at the upper right to download the PDF if you want the whole thing.) 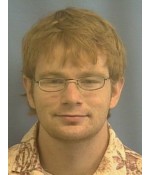 on another project having to do with the microwave background radiation.  The cosmology group at UR is working with researchers at several other universities on a radically new design for a telescope to map the microwave background radiation.  This telescope will be an interferometer, which really means a set of many very simple telescopes, combined with a mechanism to “mix” the light from all of them together.  It’s a bit tricky to do this mixing in such a way that it’s possible to extract all of the useful information at the end. The three researchers managed to solve an important part of this problem and published the result in the journal Monthly Notices of the Royal Astronomical Society.  Bunn blogged a bit about this work when we first submitted it.  You can read the article if you want to. 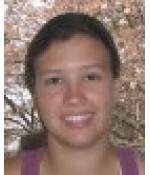 First year student Emily Nelson has recently begun work on a research project with professor Matt Trawick that seeks to improve the accuracy of atomic force microscope images.  The atomic force microscope in Trawick’s experimental research lab, a $200,000 instrument, is capable of resolving features on the scale of about one nanometer in size, about 1000 times smaller than conventional optical microscopes.  Emily is working to correct for a particular kind of image distortion that is common to such microscopes; the correction would allow these instruments to be used for sub-nanometer precision measurements in three spatial dimensions, and would be broadly useful to researchers in a variety of fields.  Emily expects to major in computer science, and also has interests in biology and the physical sciences. 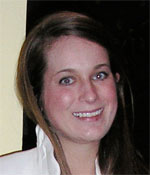 Senior Sarah Atwater is now working with professor Matt Trawick, studying the formation of vortices in a fluid as it is drawn over a surface in flow coating, a technique used to prepare thin polymer films.  They are examining whether vortex formation may be responsible for observed defects in resulting films.  Sarah began doing research during her sophomore year, analyzing angular correlations in molybdenum nuclei with professor Mirela Fetea. 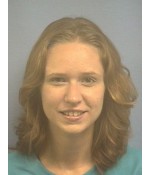 Berta spent her summer working at both Lawrence Berkeley National Laboratory and Yale University with Richmond Professor Con Beausang.  Berta worked on two different projects: the first involved calculating transmission efficiency and count rates for detecting fission fragments at the focal plane of the Berkeley gas filled separater.   The second involved analyzing data from an experiment done in Berkeley to populate low spin excited states in Gadolinium 154.  Berta began working with professor Beausang as a freshman, and continues working with him this academic year. 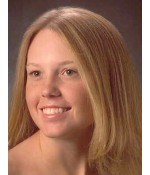 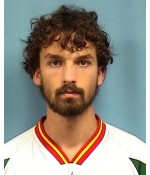 Mark Moog spent his summer studying particle physics with professor Jerry Gilfoyle.  The two began their work together after Mark’s freshman year at UR.  Mark used the University of Richmond supercomputer cluster to run simulations of a possible future experiment at the CEBAF accelerator at Jefferson National Laboratory in Newport, VA.  The simulations address whether the experiment would be able to accurately measure the form factor of the neutron at high energies.  In addition to his work at Richmond, Mark also traveled to Jefferson lab to help monitor the accelerator during ongoing experiments there.   This fall, Mark travels with professor Gilfoyle to a national physics conference in Oakland, California to present the results of their work. 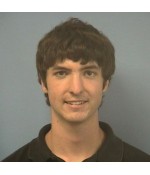 Brian Mahoney will graduate this year with degrees in both chemistry and physics.  His research has been in the chemistry department with Wade Downey, and he spent his summer developing a new way to synthesize propargylic alcohols.  These compounds are frequently used as starting points for further sythesis of drug compounds by the pharmaceutical industry, and Brian has worked to make the sythesis faster and more economical.  Brian began working with professor Downey during his freshman year.  This fall, he will present his work at a chemistry conference in Nashville, TN. 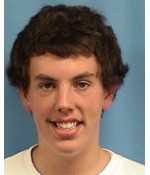 Junior Alex Cooke, together with sophomore Adam Hake, spent his summer doing research with professor Ovidiu Lipan in biological physics.  Alex, a physics major, has been emersed in wet-lab molecular biology this summer, which has whetted his appetite for the study of genetics in the biology department.  He currently plans to major in interdisciplinary physics with a concentration in biology.  He has been studying iron uptake system in the bacteria E. Coli, which is usefule for understanding the general problem of iron regulation in cells.  He will continue his research with professor Lipan this year. 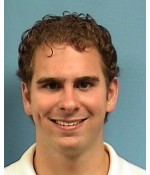 Sophomore Matt Jordan spent his summer working with professor Jerry Gilfoyle to analyze the systematic uncertainties in measurements taken at the CEBAF particle accelerator at Jefferson National Lab.  They are are part of a large, international collaboration studying the structure of the deuteron particle, and the results of their experiments will ultimately be used to test current theoretical models of nuclei.  The bulk of their work was performed here at UR on the physics department’s powerful supercomputer cluster.   Matt began working with professor Gilfoyle during his freshman year.  Their research continues this academic year, and in October the two will travel to to present their work at a conference in Oakland California. 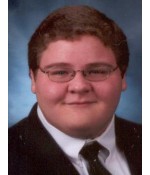 Physic major Nat Mason did research over the summer with professor Ovidiu Lipan in the field of Biological physics.  Nat is working on the heat shock system in mammalian cells. He is looking for ways to undderstand the response of the cells to a double heat pulse. This research will open new perspectives on heat shock memory (thermotolerance).  Nat has worked with professor Lipan since his first year, and continues his research this fall. 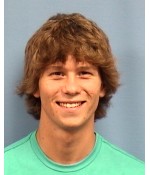 Sophomore Adam Hake spent his summer doing research with professor Ovidiu Lipan in biological physics.  Although Adam has been emersed in wet-lab molecular biology, he is also highly interested in the theoretical aspects of biological systems.  He has been studying iron uptake system in the bacteria E. Coli, which is usefule for understanding the general problem of iron regulation in cells.  He will continue his research with professor Lipan this year. 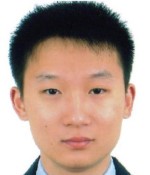 Haoxuan (Jeff) Zheng started research in Ted Bunn’s research group during his freshman year and continued during the summer afterwards.  He examined theoretical models of dark energy, the mysterious phenomenon that is causing the expansion of the Universe to accelerate.  He used observations of supernovae, the microwave background radiation, and other observations to see what limits we can place on the physical properties of dark energy. 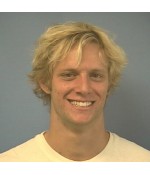 Ben Rybolt worked in Ted Bunn’s research group during the summer of ’08 and during the school year before then. His work has focused mostly on testing methods for diagnosing and removing contaminants from maps of the cosmic microwave background radiation. He presented his work in a poster at the summer 2008 meeting of the American Astronomical Society in St. Louis.

Brent Follin has worked in Ted Bunn’s research group for the summers of 2007 and 2008, focusing on issues related to the construction of MBI, a new telescope being constructed for observations of the cosmic microwave background radiation. Along with Peter Hyland (U. Wisconsin and McGill U.), Brent and Ted solved an important problem related to finding the best possible design for this sort of telescope. Brent presented preliminary results in a poster at an American Astronomical Society meeting in St. Louis this summer, and we just submitted a paper for publication. Ted wrote a bit more about this in his blog.

Austin Bourdon has worked in Ted Bunn’s research group for the past two summers, examining a bunch of possible explanations for some unexplained features in maps of the cosmic microwave background radiation. He presented his work in a poster at a meeting of the American Astronomical Society in Denver this summer, and he is coauthor on a paper recently submitted to the journal Physical Review D. Bunn wrote more about this on his blog, and you can see the paper here. 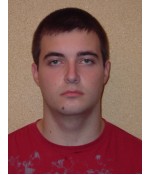 Cosmin Pancratov ’10 is first author on a series of three articles just published in the journal Computing in Science and Engineering.  The articles describe the optimization of a numerical routine used for image analysis, work done with physics professor Matt Trawick, computer science professor Kelly Shaw, and Jake Kurzer ’10, all coauthors.  Cosmin and Jake both began doing research with Trawick during their freshman year.