UR senior Haonan Liu has achieved the outstanding honor of being one of 16 finalists for the prestigious Rhodes Scholarship from China.  Liu, a physics and math major, has had a stellar career at UR since arriving in 2012, some highlights of which include:

To add to these highlights, Liu was selected as one of the 16 finalists for the inaugural year of the Rhodes scholarship being available to Chinese citizens.  The Rhodes scholarship is widely recognized as one of the most prestigious academic honors in the world and attracts more than 12,000 applicants.  In his Rhodes application proposal, Liu described his plan to return to Oxford to study quantum information and quantum teleportation.

Liu will be beginning his PhD in physics at the University of Colorado in the fall.  That institution is ideally suited to his research interest in quantum information, being affiliated with both the National Institutes of Standards and Technology (NIST) and the JILA laboratory.

Recently someone asked me if I could summarize for them them in one sentence what the Higgs Boson is and why it is significant.  I said no.  It can’t be done adequately in one sentence.  But here is an attempt to explain it in a few paragraphs:

In our contemporary understanding of particle physics – the reality of nature on the smallest scales where tiny elementary particles are important – particles are not really little points but packets of energy with an amorphous shape and ambiguous location.  Each different kind of particle, such as electrons, quarks, and photons, has an associated “field” extending throughout space, and the value of the field at any location corresponds roughly to the likelihood of having a particle of that kind with a certain momentum at that point.

Different fields can exchange energy through interactions, so that one type of field gives its energy to another at a certain place.  This can result, if enough energy is transferred, in one field going down in value in one place and another field going up, so much so that the first kind particle in a certain location disappears and the second kind of particle appears.

This is where the Large Hadron Collider (LHC) comes in.  To create a Higgs Boson by having another particle interact with the Higgs Field and transfer its energy requires a lot of energy for the incoming particle.  In order to get those energies, supercolliders such as the LHC, which is located at the CERN laboratory in Switzerland, accelerate particles to almost the speed of light and smash them together.  In the smash a bunch of new particles are created from the energy of the collision, via the fields interacting as described above, and fly out in all directions.  Many of the particles flying out are detected by instrumentation, for instance they may interact with materials such as silicon to create an electrical signal.  Some particles pass right through materials and can’t be detected directly.  But by tracking the motion of as many of the particles as possible from a collision, the presence of those which can’t be tracked can be inferred, since energy and momentum have to be conserved.  The existence of a Higgs Boson created in a collision would show up as one of these ‘missing’ particles.  Sure enough, at the LHC there have been a number of collision events where the missing particle has just the right properties – such as no charge and large mass – to be the Higgs Boson.  Particle physicists are now confident that they have created Higgs Bosons in collisions, and therefore the Higgs field and its interactions are real, and that is how all other particles have the property that we perceive as mass. 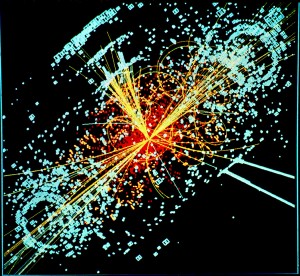 Artist’s conception of a particle collision in the LHC producing many new particles from the energy of the collision. Some of the new particles are observed as they pass through detectors.

The Higgs Boson is the final particle predicted by the so-called “standard model” of particle physics to be shown to exist.  For this reason, and because the interaction with the Higgs field gives rise to mass, physicists have been excited to see evidence of the Higgs boson being created.  Still, our understanding of fundamental particles and their interactions is far from complete.  80% of the mass of the Universe, which is in the form of dark matter, is not made from particles in the standard model.  We also do not have a successful theory that explains how gravity itself can be carried by a field.  So while confirming the standard model by confirming the creation of Higgs bosons at the LHC is a triumph for particle physics, it is not the end of the story.