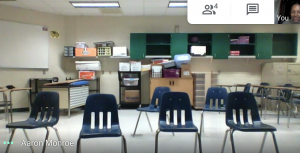 This was our best meeting so far. We had two students in attendance, Jayden and Joy, and they were both very attentive and excited to work. We went over the bulleted points of the plot and had them act out/improv each scenario while we recorded their dialogue. We went through about 5 or 6 scenes/plot points and they put a good amount of effort into every scenario. Next, we are going to write out the script by incorporating their dialogue and go over it with them to see if they are satisfied/want to make any changes. Then we will hopefully get them to start drawing.

Honestly, this week was a lot harder than last week. We only had three kids and struggled a lot to engage them. We also learned that 2/3 of our students are ESL, so they had a lot of trouble reading their lines (and when they tried, you could see their confidence began to falter which made some of them upset and storm off camera). We asked how they would want to represent our scenes, and we agreed on drawings. Instead of having them speak their lines and record them, I think we settled on having text bubbles where they could write in the lines. However, it was clear that the kids were not as engaged as they were the week before which was tough and a little frustrating for us.

Overall, I know that I mentioned feeling nervous because of the disconnect between people when you talk online, but I didn’t think about what would happen if the students weren’t listening. It’s really hard to get someone to take you seriously when you’re talking to them through a screen and don’t have the ability to stop what’s going on. I hope this week is a little easier to handle the students, and we can get somewhere productive with a little more structure in the time that we have with them. It was annoying at times, but reassuring to hear that we were doing a good job from our site director considering our circumstances. 🙂

As we have seen in both Much Ado and The Winter’s Tale, racial difference does not play much of a role in Shakespeare’s plays—with the notable exceptions of Aaron in Titus Andronicus and Othello in Othello. It’s worth noting that although Caliban in modern productions of The Tempest is often played as a Black slave, that isn’t actually a part of Shakespeare’s original text…

Visit Blackboard/Podcasts for the whole episode or download here.