Dr. Bezio talks about the Titanic as a system, made up of “flammable and sinkable” materials, that is run by humans. As we all know, they hit an iceberg and now the ship lies at the bottom of the ocean. Dr. Bezio goes into some of the issues in the way that they decided who got to live and who had to die, and how history isn’t completely honest about that. No one really talks about those who lived at the bottom of the ship or the two men of color on the boat, all of whom died. This is just one example of how people of color and those in lower classes and other minorities are affected much more by events like these than those in a position of privilege. We as Leadership Studies majors are fortunate to be in a position where we recognize these issues and are eager enough to try and figure out how we can work on them. We also are fortunate to have resources to learn how to effectively work on these issues.

When I was listening to the podcast I almost audibly gasped when Dr. Bezio brought up Alice’s Restaurant by Arlo Guthrie. This was not the first time I had heard this song, as my Grandfather often plays it on our back deck down the shore after a glass of wine or two during the summer. I have never really listened to the song, just laughed along for the entire SEVENTEEN minutes. But after paying much closer attention to the lyrics I reached out to my grandfather who has many friends that were drafted and came close to being drafted himself. It was music like this he said, that allowed people to have a sense of humor about everything going on while simultaneously making a statement. We still see this music today, as Dr. Bezio discusses. There is plenty of content out there that entertains while making a statement.

After watching the ads for the election year 1968, what really stood out to me was the difference between the ads from the two questions. From Nixon, we saw a lot more war imagery whereas, on Humphrey’s side, there were a lot more ads that attacked Nixon. I really thought that, especially in political campaigns, if one side publishes an attack ad, the other side would respond with one. I am not saying that Nixon is a great person (*cough cough* Watergate) but I do think his campaign was smart by not fighting fire with fire and retaliating to the attack ads from Humphrey’s team with attacks on Humphrey. I may be naive but I really appreciate it when people keep stuff like this clean and are polite to each other in their ads, something we didn’t see in the 2020 election.

By comparing real-world systems to a human body, Dr. Bezio makes very clear why it is important to constantly make sure our systems are working properly and fix issues when something is wrong, and not continue on the path that clearly is upsetting the system. And like our bodies, systems are supposed to last a long time. When looking at a system, we need to think about it in terms of its longevity- how this system will function for years and years to come. I think that many systems are built this way (with the future in mind), but unfortunately, we do not know what the future is going to look like. Take for example the pandemic. Many of the systems in our daily lives, if not most, were not built with a catastrophe like this in mind. However, these systems adapted and are continuing to adapt, with a lot of focus on what life will look like once the pandemic is over too. It is important for the leaders of our systems to continue thinking this way, and constantly evolving as things change. The responses from systems to recent movements for racial equality have not been as good as they were to the pandemic, however, and have caused many issues within our society. It is imperative that we continue to critique and adjust these systems until they fit in with the current state of our world today.

I am pretty sure that half of the people who watch the Superbowl watch it for the halftime commercials. And one of the commercials that stuck with me the most this year was the Squarespace commercial featuring one of Dolly Parton’s most popular songs, “9 to 5”. As Dr. Bezio points out in the podcast- music is one of the most effective ways to get us as humans to remember something. Squarespace takes this very famous song and twists the lyrics, changing them to “5 to 9”.  Now they have you thinking about your time outside of your day-to-day job, the time when you can use their service to work on your passion, and they get that idea stuck in your head through a song. You can even listen to the full song which is 2:21 minutes instead of the shorter 39-second ad shown below. I found that this ad was very effective, I had the Dolly Parton song stuck in my head for days and it always reminded me of their commercial. 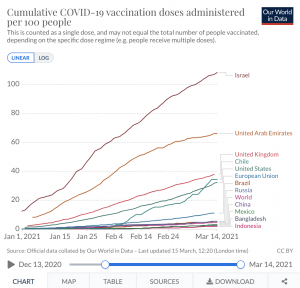 This chart that I found on https://ourworldindata.org/covid-vaccinations shows the vaccine doses per 100 people in different countries around the world. I find this chart really interesting, especially when looking at the growth in certain countries. Chile sees large growth just before February 4th whereas the United States, the UK, the UAE, and Israel all see steady growth since the beginning of the year. I am lucky enough to receive a vaccine (going on Wednesday for my first dose!!) but it is crazy to me that in only two countries, more than half of their population has received even one dose of the vaccine. It indicates to me that many different parts of the world are struggling to make the vaccine accessible to many. Perhaps we could look to the distribution in Israel in the UAE to work on our distribution here.

In the third podcast, Dr. Bezio discusses assumptions. When she talks about clothing restrictions on women, it made me think of a time in high school when a friend of mine had to have her mom bring her a sweatshirt because her off-the-shoulder top was deemed inappropriate by the librarian. The next day, all of our friends and even people we weren’t that close with all wore off the shoulder tops because we all thought it was ridiculous that she got into trouble in the first place. I remember walking into the library that day and being asked by the librarian “aren’t you cold?” It felt so incredible to look her in the eye and say, “nope”. There was a huge uproar among the student body about the fact that shoulders were deemed distracting. Could our male classmates or teachers not focus because they could see our shoulders? We all thought it was ridiculous the way they were making it our fault that the men in our high school were creepy. Like Dr. Bezio mentions, it has often been put on the shoulders of women to make sure that they do not cause a distraction, as opposed to men learning how to treat women properly. She takes it a step further though and brings up a great point about our society I have not thought of before. That is that this is kind of behavior is what feeds into victim-blaming.

This morning in my Organizational Behavior class, we talked to Mel Smith, who is the director of diversity and inclusion at Genworth, a local fortune 500 company. He discussed, like Dr. Bezio in the second podcast, that everyone has biases, but that it is important to recognize them. Dr. Bezio also discusses how we must think past the stereotypes we have for everyone because people are so much more than their stereotypes. I am Irish, and like Dr. Bezio who fits a lot of her German stereotypes, my family and I fit a lot of Irish stereotypes as well. But I know I am a lot more than that and it is important to recognize that others are as well.

Another part of the podcast I took a lot away from was when Dr. Bezio discussed representation in film. As a blonde-haired, blue-eyed white person, both Cinderella and Sleeping Beauty, two of the most famous Disney princesses looked exactly like me. I could even identify with Snow White and the Little Mermaid. I was never aware that friends of mine did not have those figures growing up. Now that I am older, I recognize the importance of creating a world where everyone can see themselves in every role model and appreciate the strides many major companies have gone to in order to create more representation on television. I still remember when Cheerios aired a commercial that included a couple that was mixed race, and hearing news outlets say what a big deal that was. Today, many commercials on television include people of all different backgrounds, which shows great progress. However, I know there is still much more to make.

I took the COVID-19 test and found that I have a strong automatic association between COVID-19 and Real vs. Fake. I think that this makes sense because there is so much information available and over the course of the past year it has become easier to figure out pretty immediately what is real and what is fake. If I were to hear that masks do not work, my mind would automatically think fake, which is what the test showed me.

In the first podcast of the semester, Dr. Bezio discusses ethics. She opens by reinforcing that content is important, especially when it comes to premises. Warren had us on the lookout for normative premises but did not put a lot of attention on them. There are two ways people think the world works, and these are frameworks are described as normative and relative. A normative framework is one where there is a universal truth that is the same for everyone. We just cannot agree on what that truth is. Normativists believe that we are getting closer every day to that truth, but, they are still constantly at odds with each other over what the truth is.

Relative ethics is the opposite. There is no universal truth, but instead, each individual has their own idea of good and bad, right or wrong. True relativism does not judge others for their beliefs- Dr. Bezio says that relativism is pure anarchy, without rules and regulations.

Right now, we are “between a relative rock and a normative hard place”- we live in a blend of the two. Some things we leave to individuals and some things society decides need to be regulated. This is cultural relativism and I think that in each election, people use their votes in an attempt to push the needle one way or the other. Traditionally, conservatives would be considered more relative and liberals more normative. There are battles all over the world to push that needle one way or the other, and many debates about which way it is appropriate for that needle to move. Especially right now with Covid, Texas is leaving it up to individuals to decide what they want to do. This is more relative but is it more correct/