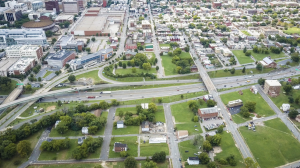 The Earth Lodge curated an exhibit of photos from Johnny Miller, an award-winning photographer, for display in the Carole Weinstein International Center gallery. The selection of drone images from his Unequal Scenes portfolio pairs images from Richmond with scenes from cities of South Africa. For example, the ghostly footprint of historic Jackson Ward following its bisection by I-95 in Richmond was presented alongside the scarred landscape left behind after the forced removals of peoples from District Six in Cape Town during Apartheid. The photos invited viewers to interact with the inscribed history of the physical lands and to confront issues of inequality in our global society. In addition to the photo exhibition, the Earth Lodge also helped to host a visit by Johnny Miller to campus and moderated a public forum with him describing his work.

In the Fall 2016 semester, members of the Geography of the James River Watershed SSIR studied the Gambles Mill Corridor and brainstormed ways it could provide enjoyment, education, and ecosystem services to Richmond students and the community. In the Spring 2017 semester, the GeoJames students wrote proposals to the University of Richmond with suggestions for how to improve the ecology within, environmental education about, access to, and awareness of the Corridor. Three groups focused on three elements: a water management, the health of the terrestrial ecosystem, and education/outreach to the UR campus (and wider Richmond) community.

An additional project in the Spring 2017 semester was the creation of comparison maps. Students compared the Willamette River Watershed and the James River Watershed, each choosing a different feature to highlight within the cities or areas found in each watershed. A few of the comparison maps are featured in this brief PowerPoint presentation.

Beginning in the spring 2016, University of Richmond students have been visiting the Huguenot Flatwater unit of the James River Park System to assist with the park’s invasive species management plan. 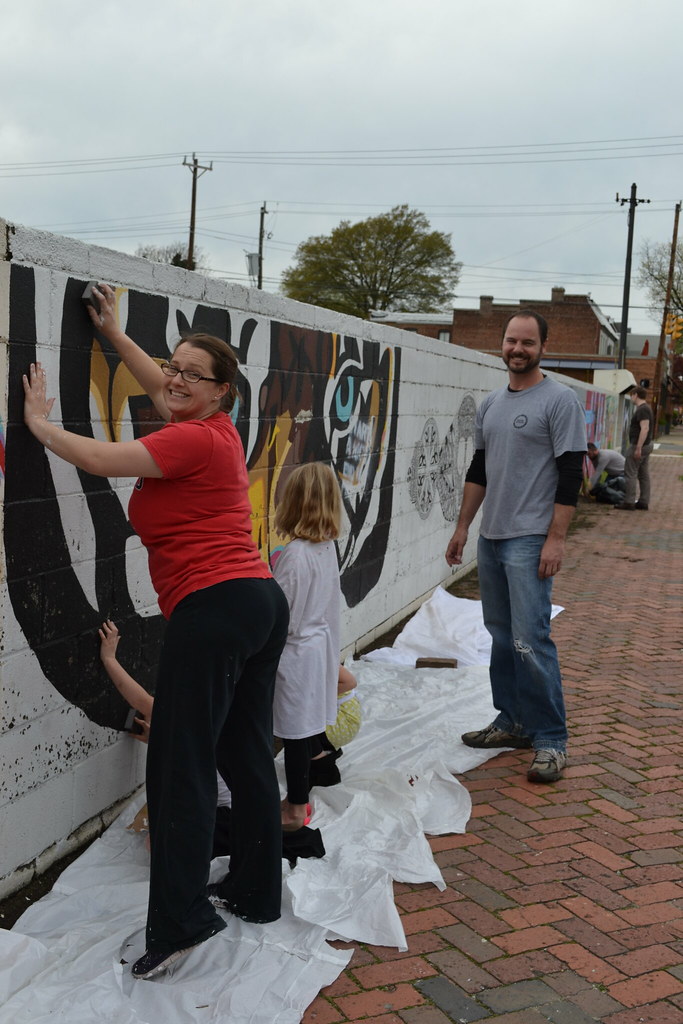 In this project, students collaborated with their peers in a statistics class to formulate content about the James River to be fed to an interdisciplinary seminar the following semester.  Students identified stories of landcover change in the metropolitan region, downloaded data to support the stories, and calculated metrics of change for the past several decades. These metric values were then provided to the statistics class to quantify trends. The maps, graphs and data generated by these two classes were then either directly captured in a mural outside of the old GRTC headquarters building on Cary Street or informed the underlying themes within the painting.

This year, students from the Geography of the James class joined with students from the Introduction to GIS class to  address a need among the different watershed-based organizations working in the region to document all public river access points and develop an online map to encourage a broader, more diverse user-group to visit the river. The two classes met simultaneously during the semester so that we could come together, when needed, for field trips and discussions. The classes also had periodic joint working sessions combining students from both classes. The final online tool has been showcased at venues throughout the city including Virginia’s GIS Users Conference.

In the summer of 2012, Taylor Holden and John Remmes completed a project identifying and mapping trees on the Westhampton side of the University of Richmond campus.  Taylor, Bill, Lauren and Kenta used this information along with information from the previous year’s Earth Lodge class as a launching point to create five educational signs that have been installed around Westhampton Lake. Themes for the signs include: (1) Common native trees on campus, (2) Carbon storage by campus trees, (3) Common wildlife species in and around the lake, (4) History and management of the lake, and (5) Westhampton Lake, James River, and Chesapeake Bay watersheds. The signage was featured in the August 2013 issue of The Green Times, a publication of the Associated Colleges of the South (ACS) Programs in Sustainability and the Environment. 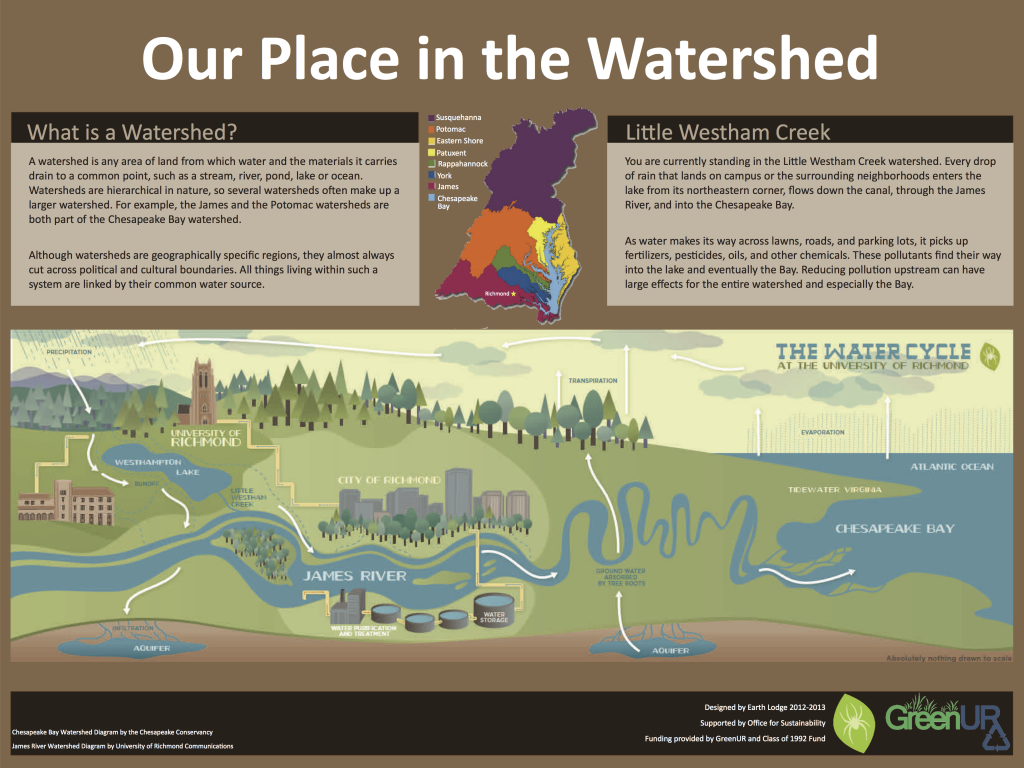 Student Connectivity to the James River

George, John, Molly and Julia researched how to better connect UR students to the James River. Their project had three phases consisting of immediate, short-term, and long-term actions. The immediate plan consisted of a survey of student attitudes about the river and a campus-based advertising campaign to increase awareness. A surprising number of students (nearly 10% of students surveyed) were not even aware where the River was located. Less than 50% had ever been to Pony Pasture. Transportation was highlighted as a major impediment to river access. In response to these findings, they proposed the creation of a shuttle system to bring students to and from Pony Pasture and Belle Isle on Fridays and Saturdays during the early fall and late spring. The shuttle was initiated in the Fall 2013 and early data indicate usage of ~100 riders per weekend. The long-term plan included a proposed kayak rental program run through the University of Richmond’s Recreation and Wellness Center. The ultimate goal of these programs is to promote healthy recreational opportunities and raise awareness of the river environment.

In reaction to the University of Richmond’s green initiative and the need for student transportation, Natalie, Jenni, Thomas and Grace sought to improve the University’s bike-based program. They researched the many benefits of a well-established bike program, surveyed the interest of Richmond students in such a program, interviewed key personnel in the University community, and looked at the ways successful programs were implemented at other Universities. Given a variety of options, increased connectivity off campus was selected most frequently by students as an action that would encourage increased bicycle use. Safety concerns were common. Ninety-two percent of respondents indicated they would use a dedicated bike trail that would connect campus to the James River. The conclusion they drew from their research was a recommendation for Richmond to seek to obtain the League of American Bicyclists’ Bicycle Friendly University award, as a quantifiable measure of significant progression toward bike-friendliness. An initial application was submitted to the League of American Bicyclists in July 2013.

Envision the James is an initiative designed to create a shared community vision about the James River watershed, and establish permanent, local efforts to improve the region’s economies, recreational assets, cultural heritage, wildlife and habitat for both current and future generations to enjoy. Kevin, Kevin, Abby and Anne worked with the Chesapeake Bay Foundation and National Geographic to develop a GeoStory highlighting the recreation and conservation initiatives and opportunities available at the nearby Pony Pasture unit of the James River Park System. Through an amalgamation of pictures, videos, facts and stories, their Geostory illustrated (1) the importance of wildlife protection, (2) the importance of trail connectivity, (3) the importance of increasing public access to the river, and (4) the importance of riparian buffers in the park. The feature is published on EnvisionTheJames.org here and on National Geographic’s Geostories.org here. 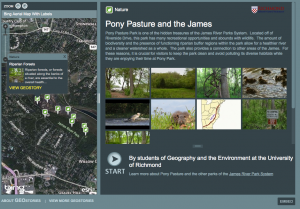 Student projects this semester focused on the ecology, history, water quality, and recreational opportunities of the Gambles Mill Corridor. The emphasis on this campus green space reinforced many of the concepts discussed in class and supported ongoing efforts outlined in the University’s Master Plan (see also the video at the bottom of this page). Phoebe, Caroline, Celeste, and Shannon organized an Earth Day initiative to clean up the Gambles Mill Trail and educate other students about this functional space. The trail holds great promise for future sustainable efforts to increase the connectivity between the University of Richmond campus, the James River, and the shops on River Road. The group used campus-wide advertising to promote the trail and led a successful event that was reported on by the Richmond Times Dispatch. Erin, Lucy, Carolyn, and Adrienne mocked up a potential sign for the northern trailhead of the corridor. Observational studies, interviews with faculty experts, and literature surveys were used to identify and catalog prominent plant and animal species.  The group then researched educational and interactive techniques to best present this information to a broad range of audiences. 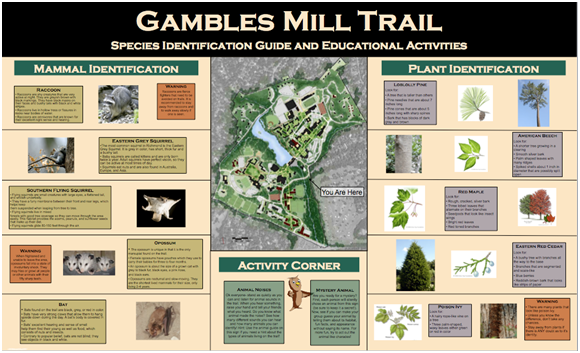 CJ, Mark, and Mike tested the water quality of Little Westham Creek, the stream flowing through the corridor. Six locations were evaluated for nitrogen, phosphorous,  temperature, oxygen levels, flow rate, turbidity, and macroinvertebrate biodiversity. This sampling effort built on and refined existing protocols for baseline monitoring of the creek in preparation of future remediation efforts. Kelly, Hans, Josh, and Kelin focused on historical aspects of the corridor, the Westhampton Lake at its northern terminus, and the lost town of Westham at its southern end. Their research formed the foundation for next year’s class project to install interpretative signage around the lake.

Virtual tour of Gambles Mill trail created by UR students.