The temperature of the planet is rising at unprecedented rate. But not all geographic locales are experiencing the same degree of warming. Even if the Earth were not warming overall, we would still be experiencing “urban heat island” effects as we become a more urban society and cover more of our cities in dark, impervious surfaces with fewer and fewer trees. During the summer of 2017, we undertook a unique project to quantify the strength of Richmond, Virginia’s urban heat island effect during one of the City’s heat wave events. The results were striking, if not surprising, and rise a red-hot flag about a looming health crisis in cities around the world.

In addition to cities being warmer overall than rural areas, cities themselves do not heat evenly. Some areas within a city are hotter than others. In order to measure the spatial pattern of Richmond’s urban heat island effect, we used electronic temperature sensors and GPS units attached to cars and bikes to track temperature at specific geographic locations at one-second intervals during one of the hottest days of the year. Teams of citizen-science volunteers included students and faculty from the University of Richmond, Virginia Commonwealth University, Portland State University, Richmond Public Schools, GroundworkRVA, the City of Richmond Sustainability Office, and the Science Museum of Virginia. In total, we collected over 60,000 temperature readings across the Richmond area. 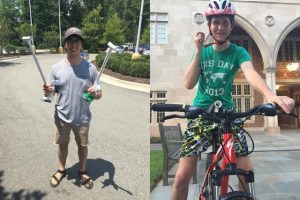 These data were used to build a high-resolution model of the spatial variability of temperature for the City. The results indicate a ~16°F difference between the warmest and coolest places during the hottest summer days. The map is being used locally on campus to develop hypotheses and inform sample designs for laboratory exercises in physical geography. The city-wide data are being paired with other newly available spatial datasets on Richmond’s demographics, greenspaces, and the environment from sources to conduct integrative assessments of the city’s historical, cultural, and physical landscapes for efforts like the Richmond’s new master planning effort (Richmond 300). We have just begun linking these spatial patterns in temperature to other demographic and health data to demonstrate the social inequities of heat stress and to identify specific at-risk communities in the City that will be a focus for a follow-up study of air quality. This follow-up study will begin this summer and will follow similar principles of citizen-science with the goal of working directly with local primary schools.