Numerous University of Richmond employees, students, interns, and volunteers, in coordination with the Kenyan National Land Commission (NLC) and the London School of Economics, are working to create a geospatial dataset of Kenyan Smallholder Settlement Scheme boundaries for research.

“Smallholder settlement schemes have played a central role in the economic and political development strategies in postcolonial Kenya.  In the transition to independence, settlement schemes help de-racialise land ownership in the former whites-only scheduled areas and offered land to many of those who had been displaced in the struggle against British colonial rule. These land transfers were lynchpins in the political coalitions and economic development strategies in Kenya’s first 25 years of statehood, and they figure prominently in virtually all political economy studies of Kenya in the 1960-1980 period.” — Catherine Boone, Professor of Comparative Politics, London School of Economics

This summer, along with UR Political Science Professor Dr. Sandra Joireman and SAL Director Kimberley Browne, three undergraduates traveled to Kenya to collaborate with NLC staff. Since then, the team has catalogued, georeferenced, and digitized over 1,500 map sheets depicting Smallholder Settlement Schemes. After digitization, polygons are put through a series of topology edits and Quality Assurance/ Quality Control checks to measure and assure data quality. The final product will consist of a polygon feature class containing the boundaries and basic attributes of each of nearly 500 Settlement Schemes. 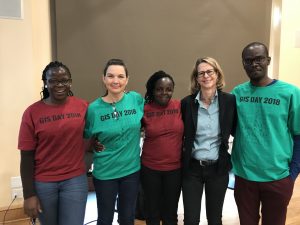 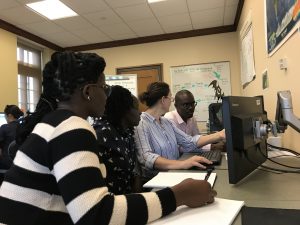 This fall (2018), several of our collaborators from the National Land Commission of Kenya paid us a visit! For three weeks in the months of October and November, we were able to work alongside Paddy, Sheila, and Maureen in the Spatial Analysis Lab. We got to train them in our latest methodologies and celebrate GIS day with them, and they contextualized the project and data. It was an incredible learning experience for everyone on the team! Later, Dr. Fibian Lukalo also visited us for a few days. Introduction to GIS students were able to learn from, as well as political science students and our SAL interns.