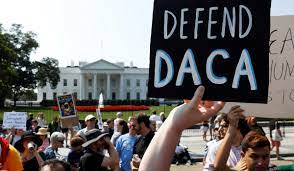 DACA, the Deferred Action for Childhood Arrivals program, is under attack again. On June 16, 2021, Judge Andrew S. Hanen of the United States District Court in Houston ordered the immediate vacatur of the memorandum that created the DACA program and remanded the program back to the Department for Homeland Security (DHS), subject to a temporary stay. [1] In a 77-page memorandum, Judge Hanen ruled that the Obama Administration program “exceeded statutory authority” in violation of the Administrative Procedure Act (APA). [2] Despite the fact that his reasoning is grounded in established administrative law, Judge Hanen’s decision not only conveniently excludes decisions that could very well create exceptions for the DACA program, but it also admits the critical role the program plays in the modern immigration policies of the United States.

Judge Hanen’s opinion states that the main reason that DACA ran afoul of the APA was because DHS implemented the program to effectively adjudicate cases, and because the program was established without the APA’s notice and comment requirement and with improper agency discretion. [3] While the implementation of DACA might have been deemed impermissible via a reading of the statute, Judge Hanen might have left out an important element that may have saved the program from his adverse ruling. As Peter Marguiles points out, in Reno v. American-Arab Anti-Discrimination Committee, the Supreme Court affirmed DHS’s ability to defer cases without notice and comment ruling if those cases fell under certain exceptional hardship such as age or infirmity. [4] DACA, as a program, was formulated to adjudicate cases for people brought to the United States as children. As such, the program could very well fall under this established exception against the requirement of notice and comment ruling. Judge Hanen’s analysis does not seem to address this issue at all in his discretion argument. Regardless, DHS, in the wake of the current decision, has announced a notice of proposed rulemaking designed to fix the flaws identified in its procedure. [5]

In addition, Judge Hanen seemed unwilling to permanently halt the program for both present and future recipients of DACA. In temporarily staying the remand of the program, he wrote: “…these rulings do not resolve the issue of the hundreds of thousands of DACA recipients and others who have relied upon this program for almost a decade. [6] That reliance has not diminished and may, in fact, have increased over time.” Under this temporary stay, DHS can accept applications for both initial and renewal applications under DACA, but the agency is only able to approve requests for renewal applications. [7]

This decision and its consideration of its implications confirm the importance that the DACA program has come to have in the modern immigration policy of the United States. Since its inception, the program has enabled some 800,000 recipients to legally stay and work in the country and there are an estimated 650,000 people currently enrolled. [8] In addition, 250,000 U.S.-born children have a parent enrolled in the program and 1.5 million people live with someone who is enrolled. [9] In an immigration system burdened with a backlog of over 1 million cases and with an average wait time exceeding four years, the value of prioritizing cases and easing this burden has never been greater. [10]