Wage Theft: to Help Struggling Americans, We Must End the Heist 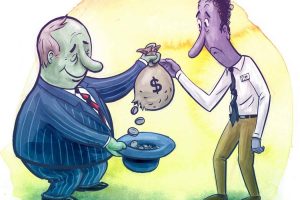 The largest form of theft in the United States is never featured in television crime shows, the thieves are almost never arrested, and it’s likely you or someone you know has been a victim without even realizing it. This is the problem of wage theft, which costs the American public far more than all robberies, burglaries, larceny and vehicle theft crimes put together.[1]

The Economic Policy Institute estimates wage theft costs American workers about $50 billion annually in stolen wages, unpaid overtime, and misclassified income.[2] That amount also does not account for the indirect social costs of wage theft, as public assistance dollars subsidize the incomes of one-third of workers who experience wage theft.[3]

The worst offenders are the corporations whose services and products we use all the time, such as Walmart, FedEx and Bank of America.[4]  Walmart has settled at least 32 separate class action wage and hour violation cases amounting to hundreds of millions of dollars paid back to workers.[5] Total recoveries by federal and state labor agencies hovers around $500 million annually, with private class action suits recovering another $400-700 million each year.[6] Of course, these amounts stand in stark contrast to the tens of billions stolen from workers each year.

Corporations are increasingly adopting employment practices that effectively immunize them from wage and labor lawsuits. 60 million people now have arbitration clauses—and possibly class action waivers—included in their employment contracts.[7] These clauses prevent workers from accessing legal recourse when their employers deny them their owed compensation. Employees also must confront the risk of retaliation for raising a wage claim, including the loss of their job.

Governments have not kept up with these abusive employment practices. The United States Department of Labor is woefully incapable of adequately checking corporate violators.[8] Often, complaints filed with the department’s Wage and Hour division are slow to be processed or go totally uninvestigated.[9] States are no better; at least fourteen states lack the capacity to investigate wage theft claims or file lawsuits on behalf of victims.[10] Of the states with labor protections, fewer than ten include the sorts of anti-retaliation protections necessary for those laws to be effective at encouraging and protecting employees who sue for owed compensation.[11] Increasingly, workers are unable to sue or are going unprotected by agencies tasked with preventing wage theft.

This is a problem that demands swift action. It is no secret that Republicans have not made labor issues a legislative priority over the four years of the Trump presidency.[12] But recent Democratic control of government now raises the possibility for more action. The following recommendations are legislative steps Congressional Democrats should prioritize right away to help curtail wage theft.

First, pass the Wage Theft Prevention and Wage Recovery Act; this was originally introduced by democrats in 2016 but never advanced out of committee in the Republican controlled House of Representatives.[13] This Act would amend the Fair Labor Standards Act of 1938 (FLSA) to allow workers to sue for owed wages that are over-and-above the legal minimum wage; prohibit waivers in employment contracts for labor and class action suits; double and treble penalties for unpaid wages and retaliation; and allow the Department of Labor to send cases to the Department of Justice for prosecution.[14]

Second, explicitly authorize state governments to sue under the Fair Labor Standards Act. This would be similar to what Congress has already done in the field of federal consumer protection law,[15] and may help fill the enforcement gap left by the inadequate federal regime. Also, this could benefit workers in states which lack or have ineffective state labor laws where a state agency might otherwise be unable to bring an action. Moreover, in a federal labor action, state attorneys general could cooperate across state lines to take on suits against large, multi-state corporations.

Last, state governments should adopt laws similar to California’s Private Attorneys General Act, which allows California workers to sue, in a qui tam capacity, to recover civil penalties for wage theft. California workers can sue even if they have litigation waivers in their employment contracts.[16] This law has had some mitigated success at providing financial recoveries. California collected $88 million in penalties subject to this Act in 2019, with at least 25% of those funds being distributed back out to workers.[17]

Wage theft in the United States is a David and Goliath story and Goliath is currently getting away with stealing tens of billions of dollars from workers. As democrats in congress look to help a national workforce financially battered by the COVID Recession, and to do more to help the American working class, advancing wage theft protections should be prioritized as a long-term means of ensuring that more dollars end up in the pockets of hard working Americans.

[8] Report: Wage Theft, supra note 4. The number of labor law cases investigated by the Wage and Hour Division of the Department of Labor from 1980 to 2015 decreased 63 percent.

[9] Nicole Hallett, The Problem of Wage Theft, 37 Yale L. & Pol’y Rev. 93, 106 (2018). In one shocking 2009 study by the Government Accountability Office, nine out of ten complaints filed with the Wage and Hour Division were mishandled or not investigated at all. Id.

[12] J.C. Pan, There Is No Such Thing as a Conservative Workers’ Movement, New Republic (Sept. 11, 2020), https://newrepublic.com/article/159338/american-compass-conservative-workers-unions-labor.