Posted on September 26, 2010 by openwidearchive

The Ancient Greeks were one of the two groups of people who made significant contribution to society in terms of architecture, government, and sports. The Ancient Greeks have influenced the lives of people today. Books that I chose start of with photographs of ancient buildings, artifacts to get students interested and excellent information for teaching about Ancient Greece. Then, I chose two books about Olympic Games. One book is fiction and one is non-fiction.  Children are granted with a thorough understanding of Greece’s background so as to see how the concept of the Olympic games originated within this magical culture of gods and goddesses. I also chose one book about Athenian democracy and one about Parthenon, one of the most recognizable buildings in the world.

All of these books would be most appropriate when teaching Ancient Greece to third grade students. (SOL 3.1)

“You are in Ancient Greece”

You are in Ancient Greece, written by Ivan Minnis, is filled with photographs of ancient buildings, artifacts and excellent information for teaching about Ancient Greece. There is no particular illustrator because all of the images are photographs. The book aims to put students in the civilizations hundreds and thousands of years ago by teaching them from the perspective of what their education, food gathering, entertainment and other aspects were like during those times. Each page has headings such as “A Greek City” and “Growing Up” which gives organization to the plentiful information. Important vocabulary works are in bold and there are portions of a page devoted to “finding out about”a topic. This visually separates the information from the student which may help recognize the information as interesting facts.

This website can be used by teachers to gain background knowledge or by children to see Ancient Greece in a more creative and understandable way.

The book Adventures in Ancient Greece was written by Linda Bailey and illustrated by Bill Slavin. The story is about a set of twins and their younger sister who want to see the Olympic Games in the future. They stop by Jullian T. Pettigrew’s Travel Agency and inform him of their wishes and he hands them a book. Once they open the book, the three of them are transported back to Ancient Greece. Once there, they see all of the culture, arts, customs of Greece and of course the Olympic Games. They have a lot of adventures in ancient Greece while they read from this book to get the information about what they are witnessing.

This online activity tests the students’ knowledge on how well they know the sports the ancient Olympians competed in.

“Ancient Greece and the Olympics” 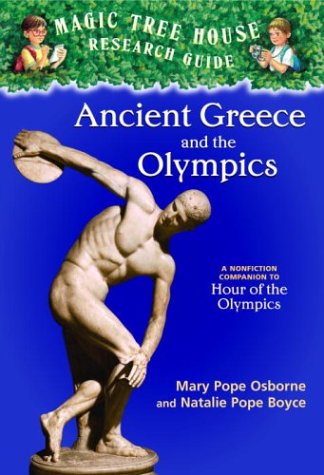 Ancient Greece and the Olympics, written by Mary Pope Osborne and Natalie Pope Boyce, illustrated by Sal Murdocca, is part of the infamous Magic Tree House Series that aims to realistically take children on a voyage through ancient history. This particular journey to Greece begins with an introduction to the country’s history and its people, then moves to the country’s religion, its daily life and its culture. All of these integral elements serve as the foundation for the major focus of this book. Children are granted with a thorough understanding of Greece’s background so as to see how the concept of the Olympic games originated within this magical culture of gods and goddesses.

With this website, children can learn about the Ancient Greek influence on the English language as they “Go for the Gold” in the Olympic Games.

This site presents teachers with a mini-unit on the Olympics in the Ancient Greece. Each day is planned out as students meet the Olympians, prepare for various Olympic games, experience the traditional “Opening and Closing Procession” and so much more. 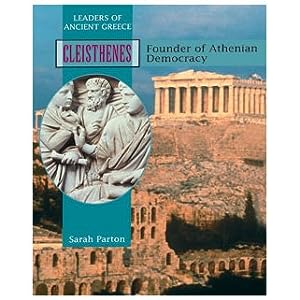 Cleisthenes: Founder of Athenian Democracy, written by Sarah Parton, illustrated by Athenian professor is about the development of a democratic form of government in Ancient Athens that was arguably one of the most important occurrences in the history of mankind. Cleisthenes is often attributed the tag of “the founder of Athenian democracy”.  This book highlights that Cleisthenes reformed the Athenian political system so that the state was no longer ruled by a small group of wealthy landowners and aristocrats, and so that ordinary citizens enjoyed more rights and could participate in making important decisions.

The Parthenon written by Lynn Curlee and illustrated by Lynn Curlee explores the tremendous history behind one of the most recognizable buildings in the world. The Parthenon was ravaged by the early Christians, occupied by the Turks, and looted by the British. Wars were fought all around it. Plato and Socrates, Phidias and Pericles contemplated philosophy, art, drama, and democracy on its steps. Today its proud, ruined columns stand high above the city of Athens, Greece, the last sentinels of what’s often considered to be the most important architectural achievement in the world. The Parthenon is without rival in regard to its beauty, purity of design, and tumultuous history.

This website has great ideas about doing big projects with students. After studying about the Parthenon, students can make their own Parthenon. It could be an individual project or it could be a group project.