Posted on November 19, 2008 by openwidearchive 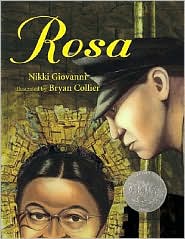 Have you ever been curious at the story of Rosa Parks? Nikki Giovanni tells the story of how Rosa Parks refused to get out of her seat along with a brief synopsis of the civil right’s movement and the final ruling by the supreme court that “segregation on the buses, like segregation at schools, was illegal” in her book Rosa.

The book starts off by describing Rosa as a good citizen, taking care of her sick mother and being the best seamstress in Montgomery.  Giovanni describes Rosa leaving work early and getting on the bus.  She pays the 10 cents at the front, gets off the bus, and goes to the back door to enter the bus from the rear.  The section for blacks was full so Rosa went to the neutral section in the middle, reserved for both whites and blacks.  An officer yells at Rosa to give up her seat but she refused to get up.  The officer threatened to call the police, but Rosa refuses to get up.  Here is an excerpt from what happens next:

As Mrs. Parks sat waiting for the police to come, she thought of all the brave men and women, boys and girls who stood tall for civil rights.  She recited in her mind the 1954 Brown versus Board of Education decision, in which the United States Supreme Court ruled that separate is ‘inherently unequal.’  She sighed as she realized she was tired.  Not tired from work but tired of putting white people first.  tired of stepping off sidewalks to let while people pass, tired of eating at separate lunch counters and learning at separate schools.  She was tired of ‘colored’ entrances, ‘colored’ balconies, ‘colored’ drinking fountains, and ‘colored’ taxis.  She was tired of getting somewhere first and being waited on last.  Tired of ‘separate’, and definitely tired of ‘not equal’.

Giovanni continues to explain how a group of women snuck into Alabama State and made posters all night long that read “no riders today; support Mrs. Parks; Stay off the buses; walk on Monday.”  Giovanni tells the story of Emmett Till, of Reverend Martin Luther King, Jr., and how people walked and walked.  And finally on November 13, 1956, almost a year after the arrest of Rosa Parks, the supreme court ruled that segregation was wrong.  “The integrity, the dignity, the quiet strength of Rosa Parks turned her no into a YES for change.”

The book is very well written and contains beautiful illustrations.  Students would definitely love reading this book and would gain a lot of information from doing so.

Curriculum Connections
This book offers a great way to teach students about Rosa Parks and give an introduction to the Civil Right’s Movement.  The book brings up important decisions, people, and events in civil right’s history as well as describing the individual story of Rosa Parks.  The book is very simple and well written and students would enjoy reading it.  In Virginia, this book could be used to identify the contributions of Rosa Parks and Martin Luther King, Jr., as well as describing the individual rights to equality under the law (Standards of Learning for Civics 3.11).