Teaching Earth Science With Children’s Literature: Where in the Wild?

Posted on September 24, 2008 by openwidearchive 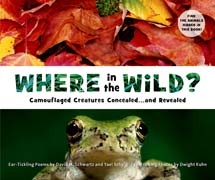 Have you ever wondered how an animals uses it’s surroundings to protect itself from predators or to silently hunt for prey? David Schwartz shows kids how animals can camouflage themselves to blend in with their surroundings in the book Where in the Wild?: Camouflaged Creatures Concealed … and Revealed.

Schwartz starts off the book by explaining to kids the importance of an animal being able to camouflage itself for survival. He explains that:

Whether an animal is looking for something to eat or trying to avoid being eaten- or both- it will probably survive longer if it blends into its environment. That’s why some creatures hide with their colors. It’s called “camouflage.” An animal can be so well camouflaged that it practically vanishes in plain sight. To stay camouflaged, some creatures change their appearance from one minute to another or from season to the next.

Schwartz then allows kids to actually try and find animals that are camouflaged in their surroundings. Each picture has a poem that goes along with it providing hints on how to find the animal or what type of animal it may be. An example for the green snake is:

Silently gliding, slithering, sliding, in the grass hiding, coiled and cunning, swift and stunning, on a rock sunning, long and lean, smooth and green, serpentine.

Then, once kids have found the animal, or give up, they can open the flap and see where the animal was. In addition, there is a little summary of the animal including facts about physical properties, how they camouflage themselves, habitats, etc. The animals included are: a coyote, a gray tree frog, fawns, a weasel, a moth, a killdeer, a crab spider, a flounder, a green snake, and a red spotted newt.

The book is a fun and interesting way to introduce camouflage and gets kids active in their learning. In addition to exploring the advantages of camouflage they are also being introduced to different types of animals that they have never heard of or seen!

Curriculum Connections
This book can be used as a fun way to introduce how animals camouflage themselves in their own surroundings. In Virginia it can be used to explain how seasonal changes affects animals and their surroundings including effects on the behavior of living things, including camouflage (Science Standards of Learning 2.7a).

This entry was posted in book review, earth science. Bookmark the permalink.