Nonfiction Monday – The Dirt on Dirt 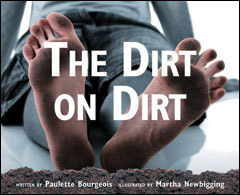 As a child who lived in the sandbox, played in the mud, dug for worms and other creatures, I find books about this topic appealing. The back cover of the book begins with the words, “Muck around in the dirt!” Yes, this is the book for me! As for the rest of the world, how can anyone not like a book in which the table of contents opens with You and Dirt?

The Dirt on Dirt, by Paulette Bourgeois, is an interesting mix of information and activities (labeled FUN with Dirt). In the categories of You and Dirt, Dirt Matters, Buried!, Building with Dirt, and Dirt for Gardening, readers learn everything under the sun about dirt. Here are a few interesting facts.

Some animals, like elephants and pigs, wallow in mud to get rid of ticks and fleas. The dried mud then helps protect the animals from the heat of the sun.

There are more than a million dust mites in an average bed. They don’t eat dust, but rather flakes of skin. Since we shed skin flakes every minute, they never go hungry!

In 1974, archaeologists uncovered 7,000 life-sized, clay soldiers while digging on a peasant’s farm near the city of Xi’an.

Earthworms turn rotting plants and animals into fertilizer and create spaces for air and water to flow through the soil.

Using vivid photographs and inviting illustrations, this text captures the imagination of readers. My seven year old son was enamored of the section on building with dirt, which looks closely at the world that lies beneath our feet and the animals who inhabit it. There is a wonderful true or false quiz that asks readers to test their knowledge of earthworms. The book also contains a glossary and extensive index.

Throughout the text readers are encouraged to try activities related to dirt science. They can experiment to see how soap and detergents work, bake a mud cake, make the world’s greatest dirt (from a homemade composting box), make a dirt shake to see what’s in dirt, learn about erosion, and more. On the Kids Can Press web site you can download a free activity.

I love just about about everything about this book, save for one thing. On the back cover of the book, is the sentence, “Earth, mud, grime, soil–whatever you call it, dirt is everywhere, even where you don’t expect it.” The scientist in me really bristles at the use of the word dirt, and I am disappointed that the word soil wasn’t used more often. I know this is picky, and that for some of you, this is simply a matter of semantics. However, I work very closely with teachers and kids in classrooms to define and study soil. Calling it dirt is akin to calling insects bugs.

Despite this one tiny complaint about the use of the word dirt instead of soil, I found this book to be extremely entertaining and informative. I highly recommend it.

This post was written for Nonfiction Monday. Head on over to Anastasia Suen's blog and check out all the great posts highlighting nonfiction this week.

For those of you interested in digging around for some more info on dirt (soil!), here are some terrific sites to get you started.