One of the first things that are noticed in music videos is whatever the artist/band is wearing. It could be muted colors and clothes such as the clothes worn in the music video for The Police’s ‘I’ll Be Watching You.’ This non-use of extravagant clothing allows the viewer to focus on the other parts of the video that the band wanted to focus on, mainly all the mentions and examples of stalking as that connects to the overall message of the song. On the other end of the spectrum, the clothes worn in the videos can be so extreme it draws the viewers gaze for the entirety of the video. One example of this would be shown in the music video for Boy George’s ‘Karma Chameleon,’ where everyone in the video is wearing very flamboyant clothes, showing extreme versions of what Southern Belles would wear in Mississippi in 1870. 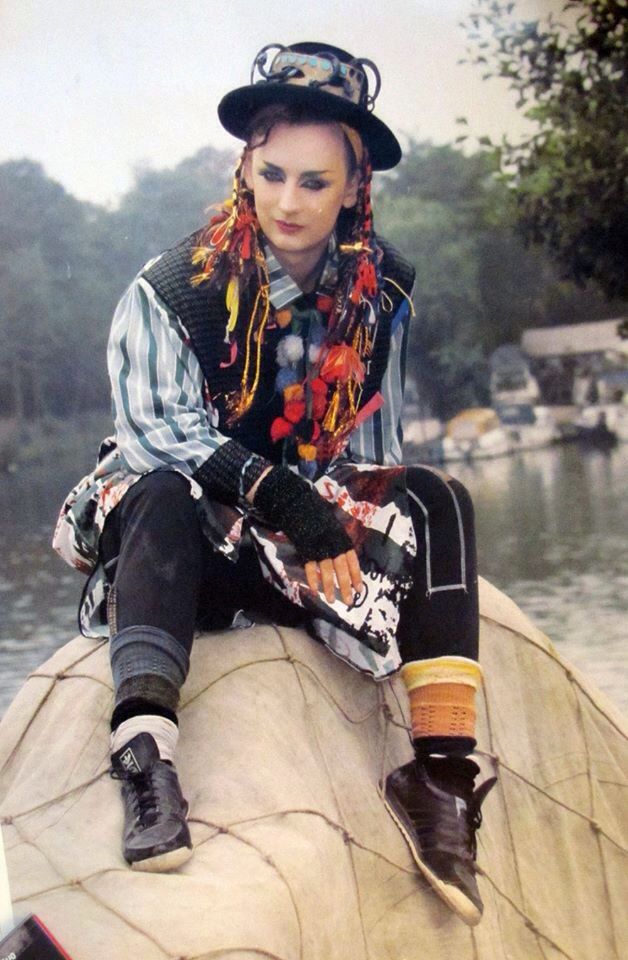 (Left: Boy George on the ‘Karma Chameleon’ set, Pinterest.)
(Right: The Police during ‘Every Breath You Take,’ Songfacts.)

In the ‘We Are the World’ music video, during the group shots of everyone singing the chorus together, there are splashes of white throughout the crowd. These are shirts and/or sweatshirts that certain members of USA for Africa are wearing. This was mainly for promotion. If the members of USA for Africa were wearing the logo of the group, they were visibly showing their support for the group and the cause it was supporting.  Furthermore, the showing of multiple people wearing the shirts and/or sweatshirts with the logo exemplified the unity between the artists, and how all of them were collaborating and coming together as a unit in order to help the people who no one was helping. The goal of the song is to not emphasize a single singer but to show how all of these artists came together for the same cause that all of them were passionate about.

(The USA for Africa white shirts were seen throughout the artists, IMDb.)

In ‘Girls Like You,’ the music video is very much centered toward the individuality of the women shown throughout the video. The purpose of highlighting each woman’s personality and their uniqueness is to show them for what their impact on the world is, not their beauty. It is by no mistake that all of the members of Maroon 5 are wearing very dull clothing, almost being able to blend into the background of the set. Director David Dobkin’s aim was to place all the attention of the women in the video, what they were wearing, and how it emphasizes their power and distinctiveness. In an EW interview, Dobkin states that

“Part of the idea was that that you may not know everybody, and that would drive people to ask question and go, “Oh, who’s this girl and what is that thing on her shirt? What does that say? What is that movment about?” ” (EW).

Dobkin’s main goal was to leave people wondering who all these women were and what their specific impacts on the world were. The three women that are seen with writing on her shirts are Olympian Aly Raisman, immigration activist Angy Rivera and Jackie Fielder, an activist supporting Native Americans. Raisman, besides being a respected gymnast and overall athlete- with 1 bronze medal, 2 silver, and 2 gold in the 2012 and 2016 Olympics combined- is also a spokesperson for sexual assault survivors. She took on this mantle when she spoke up about her own personal experiences with sexual assault against the former USA Gymnastics doctor Larry Nassar, which sparked more women to speak up about their own stories (Nassar would later be sentenced to 3 life sentences for molesting children and women, along with child pornography, and was accused by over 300 women in total). Raisman is seen wearing a shirt that clearly says “Speak Your Truth.”

Angy Rivera is an immigration activist based in New York City. She has been very public about her experience living as an undocumented teenager, before being granted a visa in 2013, and is a spokesperson for the DREAM program and supporting the goal of reaching higher education for immigrants. Rivera is seen wearing a shirt that proudly says “Undocumented/Unafraid/Unapologetic.”

Jackie Fielder is a member of the Three Affiliated Tribes and works with the organization Mazaska Talks, which is an indigenous divestment campaign. Up to now, her most important contribution to helping the Native Americans fight for their rights has been through the protests that took place at Standing Rock. She was the youngest member of the delegation that was brought together at Standing Rock, and she uses her age as a factor because the companies she and her sisters are fighting underestimate her, which usually ends up working in her favor. Fielder is seen wearing a shirt that openly says “Divest/Water is Life.”

Because the color of the set is dull and the clothing that is worn by all the members of Maron 5 blends into the set, the viewer’s attention is automatically drawn to these shirts, which in turn helps pass their messages on. 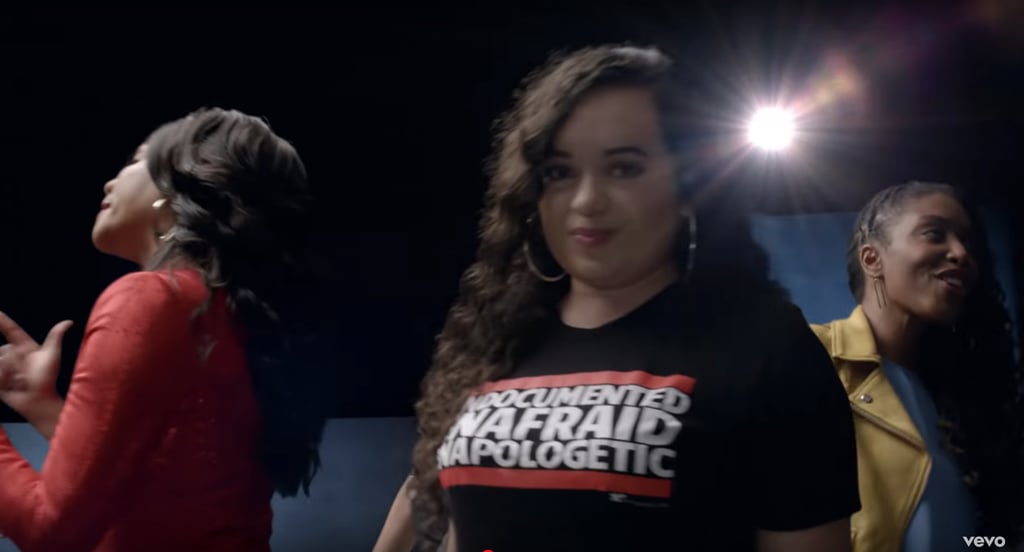 (Top: Aly Raisman’s shirt in ‘Girls Like You,’ Billboard.)

(Middle: Angy Rivera’s shirt in ‘Girls Like You,’ Pop Sugar.)

(Bottom: Jackie Fielder’s shirt in ‘Girls Like You,’ Billboard.)