Musical Analysis- ‘We Are the World’

The song ‘We Are the world’ itself has been put into the pop genre of music. It certainly fits, catchy lyrics, the use of synthesizers, electric guitars, and a normal structure or form of a pop song (ABABACA). It moves from the first verse to the chorus, on to the second verse to a repeat of a chorus. Rounding out the song is the bridge followed by the last chorus, which in the case of ‘We Are the World continues for a couple minutes. This is very common in songs that fall under the pop genre. ‘Girls Like You’ follows this same pattern, the first verse followed by the chorus, the second verse, followed by the chorus, the bridge- Cardi B.’s rap solo- followed by one last chorus. However, ‘We Are the World’ is also in its own section of musical genre, one that encapsulates a collaboration between just a couple artists.

In total, there are 45 celebrities taking part in the song, the most notable soloists being “Jackson, Richie, Stevie Wonder, Cyndi Lauper, Bruce Springsteen, Paul Simon, Huey Lewis, Kim Carnes, Daryl Hall, Dionne Warwick, Willie Nelson, Al Jarreau, James Ingram, Tina Turner, Kenny Loggins, Billy Joel, Ray Charles, Bob Dylan, Diana Ross, and Steve Perry” (Perone 177).  Within the artists listed, very few fall into the same genre of music. This bringing together of musicians with all different backgrounds was done with the purpose of bringing together the listeners of each background. Quincy Jones paired Michael Jackson and Diana Ross together, a match that makes sense seeing as how both were successful Motown artists. On the other hand, Jones also paired together Steve Wonder and Bruce Springsteen to sing the chorus together, one a Soul and Funk singer, the other a rock singer, a combination that doesn’t automatically come to mind when thinking over collaborations. Combinations such as these are continuous throughout the song, Huey Lewis singing with Cyndi Lauper (rock and pop), or Billy Joel singing with Tina Turner (rock and R&B). 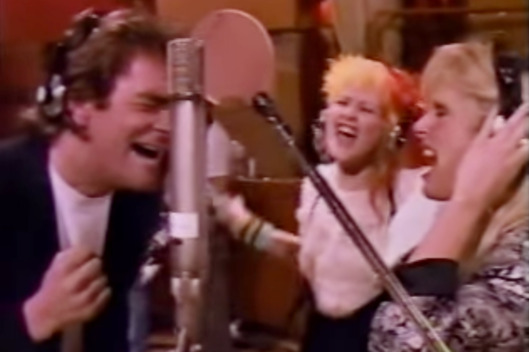 The combination of Jackson and Richie, plus the dozens of highly successful musicians and other celebraties that they brought to the ‘We Are the World’ project, made for an excitement very rarely seen with the release of any new single. (Perone 178).

One section of the song, in particular, was created not only to appeal to the different audiences that would be listening to the song but the different ages as well. The trio is made up of Dionne Warwick, Willie Nelson, and Al Jarreau, aged 44, 51, and 44 respectively would be artists that were not known to the younger generation.  These three artists would fall under the adult contemporary genre of music, along with Lionel Richie, as he was 34 when ‘We Are the World’ was recorded. The inclusion of Warwick, Nelson, and Jarreau did not only aid in breaking the genre barrier by the incorporation of so many artists but it also helped break the age barrier. By having this trio sing on the track, it almost completely ensured that not only would the younger generation listen to the song-the fans of Cyndi Lauper, Michael Jackson- but also would appeal to the older audiences.

The other difficulties that came with the combination of so many musicians were how everyone’s separate timbres, vocal styles and articulation were to be mixed together. When it came to the timbres of all the artists, those whose were similar were paired up to sing together. The falsetto of Michael Jackson and Diana Ross are so alike in range and pitch that a duet between the two would further exemplify their specific timbre. Such was the same in the duet of Ray Charles and James Ingram. Their voices hold the same intensity and the same soulfulness, so, therefore, to give the song the ‘soul’ it was missing, the two were paired up together as the final duet in the song, before returning to the chorus with all of the artists.

In terms of vocal styles and articulation, the duet between Steve Perry and Daryl Hall is a perfect example. Both are rock singers with the same intensity in their voice. The vocal styles of rock can be placed on many spectrums, from clean to raspy, to screaming and guttural, to driving or growling. For Perry and Hall, both of them sing cleanly, and drive through their verses, keeping their intensity the entire time. Another aspect of the vocal style of rock is the small flairs that the artists are able to put into the lyrics, such as when Perry sings ‘lives’ or when Hall sings ‘day.’ The articulation that both artists use is very similar as well. There is no staccato, no enunciating of every single word in the lyric in time with the drummer, but instead, is all tied together. This slurring of the lyrics is not too extreme to where no one can understand what Perry and Hall are singing, but enough to where all the words are connected. There are no breaks where the two breath in between the words, but instead, in relation to their vocal styles, the two drive through the verse, taking a breath once they sing all the way through.

This was not decided lightly, but also was not just done by who wanted to sing with who. Days before the group came together to record the song, Lionel Richie, Quincy Jones, and Jones’ associate producer and vocal arranger Tom Baylor came together. Collectively, these three decided who was going to get a solo, and how to match up so many different voices.

Another challenge that needed to be overcome was everyone’s overall musical experience. This was highlighted throughout the DVD documentary released about the song, ” ‘We Are the World’: The Story Behind the Song,” a behind the scenes DVD showing what went into the song and how difficult it was to make everything work. A perfect example of this is how Stevie Wonder and Ray Charles were able to figure out their harmonies. Both being blind musicians, there was going to be no one else who understood how they were able to understand their parts in the best way, so instead, it is shown that the two of them were working together using the Braille system to write their harmonies and helping each other figure their specific parts to the song.

Another example is shown through Bruce Springsteen learning his solo during the chorus. In his autobiography, Springsteen reveals that as successful as he is, he as never learned to read sheet music, he does everything by ear. Considering he is a musician, the fact that he has never learned to read sheet music is surprising to most, but as shown in the DVD, the only way he finally got the take he approved of was by just singing the verse over and over again until he thought it sounded perfect. Because of reasons such as the ones listed, the making of the song was even more difficult, seeing as everyone wanted to be a part of the process, but the process had to be inclusive and respectful of the way that each artist recorded music.

I held it in my arms [his first guitar], ran my fingers over its strings, held the real tortoiseshell guitar pick between my teeth, tasted it, took a few weeks of music lessons…and quit…I still can’t read sheet music to this day… (Springsteen 42).