This week, over 800 of KFC’s stores across the UK were closed due to a chicken shortage, while the remaining 100 are operating on a very limited menu (reaching it’s maximum closure amount, initially starting with just 300). As the UK alone is one of KFC’s top 5 markets (number 1 in all of Europe), this mistake will  be a massive blow to KFC’s sales for the year.

This all comes as a result of the switch over of a delivery service; initially, they were supplied by Bidvest Logistics, but last Wednesday, switched over to DHL. Bidvest has stated that the transition for them has gone very smoothly. On the other hand, DHL currently admits that it has had sudden “operational problems” as of late that has led to many delayed and/or incomplete orders.

It seems as if the new supplier had not properly accurately predicted the effect that this new client would have on their operations. As a result, it appears as if they have gone over their capacity to not deliver products to their clients across the entirety of the UK in a timely matter. There was clearly a problem with the amount of shipping that the company could complete, and they seem to have gone over capacity and not been able to meet the demands of their clients as a result. This also comes at a time when KFC UK is already under heavy fire. This switch from Bidvest to DHL led to a closure of 2 distribution centers and layoffs for about 300 employees, all on the guise of “increased efficiency in the supply chain”, efficiency that should have been handled and met by DHL shipping. l

Additionally, this is definitely a big issue for KFC from both a profit standpoint as well as a PR standpoint. Many consumers have already begun posting videos, snapchats, and tweets calling out the company and claiming to angrily head to their competitors as a result.

However, KFC is handling it quite well- they have chosen to continue to pay for all employees for the week as an act of goodwill as well as to respond to consumers over social media platforms with a more humorous approach (such as the one pictured below): 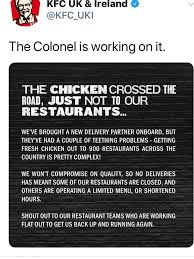 Interestingly, as can be seen in the comments, KFC’s post seemed to pay off: most people are commenting in favor of the company while tearing into DHL. Comments include calling KFC “birdbrained” for trusting DHL as a shipping company, cracking jokes at how the company often just leaves a note claiming they tried to deliver, and many more negative comments aimed at DHL.

The shipping company claims it to be a result of the transition and that things should get better in the following weeks. This inability to proper plan and to handle the increase shipping has definitely led to some questions: Will DHL actually be able to meet the current (and future) demands of their clients, even as they grow, without having another issue such as this one? How will KFC proceed from here given the incredible losses they are facing as a result of loss of a whole weeks sales?

11 thoughts on “KFC is running out of chicken”