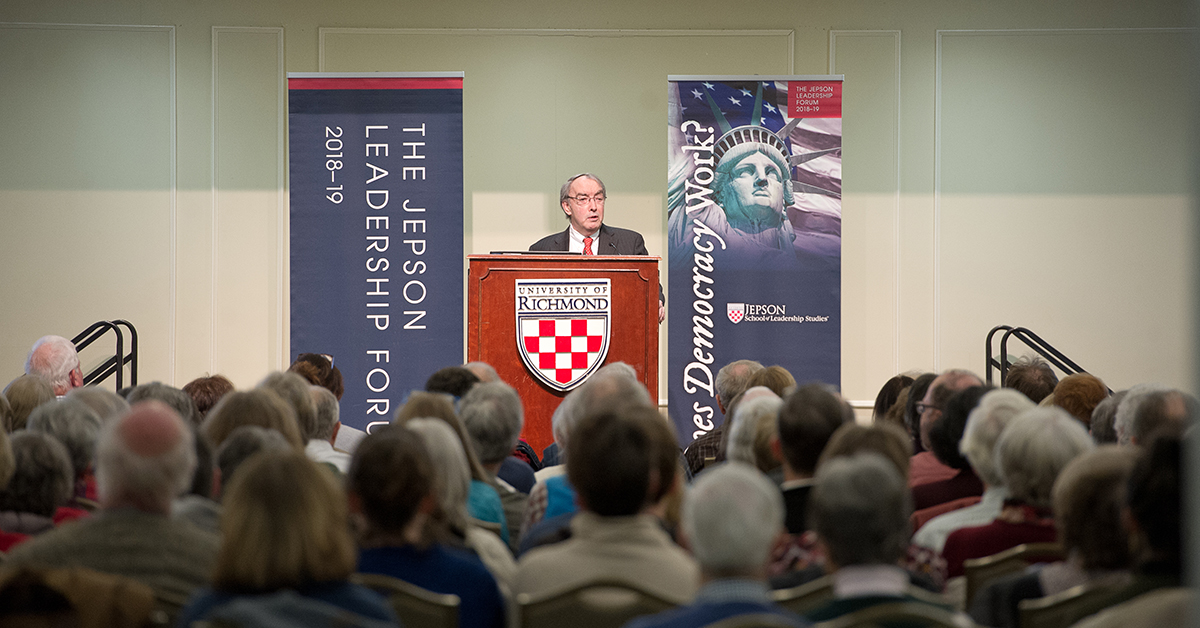 Citizens of democracies often don’t understand issues well enough to vote in a way that reflects their best interests, according to political scientist Dr. Larry Bartels. He said even the few who are well informed and politically engaged generally vote according to their social identities and partisan affiliations rather than their issue preferences—just as their less informed peers do.

“As a result of these limitations, elections really don’t do much in the way of constraining the behavior of elected officials,” Dr. Bartels told a capacity crowd at last week’s Jepson Leadership Forum. He shared research from the book he co-authored with Dr. Christopher Achen, “Democracy for Realists: Why Elections Do Not Produce Responsive Government,” to deconstruct what he calls the folk theory of democracy.

In our idealized conception of democracy, well-informed citizens carefully consider the issues and then vote in a way that will benefit them and perhaps even society at large. In reality, that rarely happens, according to Bartels.

Policy choices are far more complicated than they seem at first. Bartels cites Brexit as an example. Word choice—the language used to frame issues—can skew how we view issues. And most of us simply don’t have the time or inclination to learn enough about public policies to make a choice that will benefit us.

Instead, Bartels argues, we vote according to our social identities and party loyalties. Even when voting on incumbent candidates, we generally don’t make informed, rational choices about an incumbent’s effectiveness. We hold incumbents accountable for things outside their control—such as floods or droughts—and tend to give little weight to anything that happened prior to the six-month run-up to the election.

For all these reasons, the political elite tend to govern according to their own preferences, rather than in response to the electorate.

Should we assume then that democracy is a failure?

Not necessarily. Democracy has its good points, Bartels concedes: Voters agree to abide by election outcomes, thus preventing violence and social unrest. The randomness of elections ensures no one party or group remains entrenched in power. Politicians running for election generally abide by conventional norms. And democracies foster inclusivity.

The foibles of the democratic process, however, underscore the need for ethical, effective leadership. If citizens are not particularly effective at discerning the intricacies of complex policy issues and voting in their own best interests, it is incumbent on our leaders to make informed, ethical choices that promote the common good.