Much of the time the location of the watershed is not fully cleared of all vegetation and organic material, which when submerged begins to rot.  This decomposing natural waste releases methane, a greenhouse gas that has greater global warmer potential than carbon dioxide, into the atmosphere.  The levels of methane released depend greatly on the conditions of each reservoir, since sediment flow and water temperature are key determinants.  It has been reported that levels exceeding 150 mg methane m2 is emitted each day by a temperate hydropower reservoir in Switzerland (International Rivers), and it is suspected that the emission levels of many older reservoirs are not far behind. 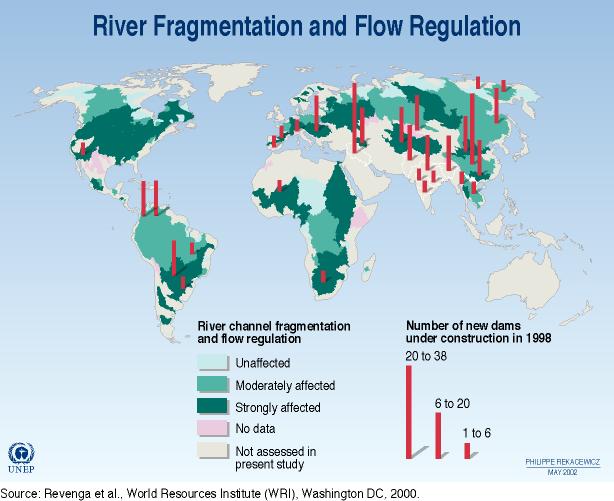 The majority of the world's water supply is someway interconnected either by channels, estuaries, and/or inlets.  Mega dams have the ability to fragment bodies of water, therefore, affecting global interconnected ecosystem.  The affects of this fragmentation can cross national borders, often creating unrest between neighboring countries, because mega dams negativity impact waterways many kilometers both upstream and downstream from their base (WWF).

As a result of heavy dam construction beginning in the early twentieth and persisting to late in the century there are few large free-flowing rivers left in the world as a result of waterways being redirected for agricultural or other uses.  Figure One can illustrate the severity of this global fragmentation of waterways as a result of manmade structures (UNEP).