In addition to many of the fruits you are already accustomed to like mango and papaya, many other fruits that are not readily available in American supermarkets are prevalent in Southeast Asia.

Mangosteen is a tart fruit that is available in most markets and through street vendors in Thailand and Cambodia.  The dark purplish outer shell cannot be eaten and must be peeled to get to the pale white fleshy insides.  Careful, though. Each fleshy edible pieces has a seed inside that you can’t eat.  With a little work and usually a bit of purplish coloration from the shell on your hands, the payoff is big because the taste is candy-like. Rambutan is another personal favorite. Less tart than the Mangosteen, the outer alien-like shell is easily peeled. Often, you can take your fingernail and pierce the shell, separating the shell into two halves.  Inside is a sweet grape-like fruit with a seed that also cannot be eaten.

Lychee is another popular and plentiful fruit. Whether you enjoy eating fresh fruit, or having it in milkshakes or smoothies, lychee is another sweet with a hint of tart.  Like the Rambutan, you can peel the shell easily and inside the fruit is, again, a seed that you can’t eat.  Lychee grow in bunches on small trees and it is common for them to be sold by the bunch. Also, this makes them easy to access if you happen to walk past a lychee tree, as you will likely see local Thais and Cambodians sampling them around their community. 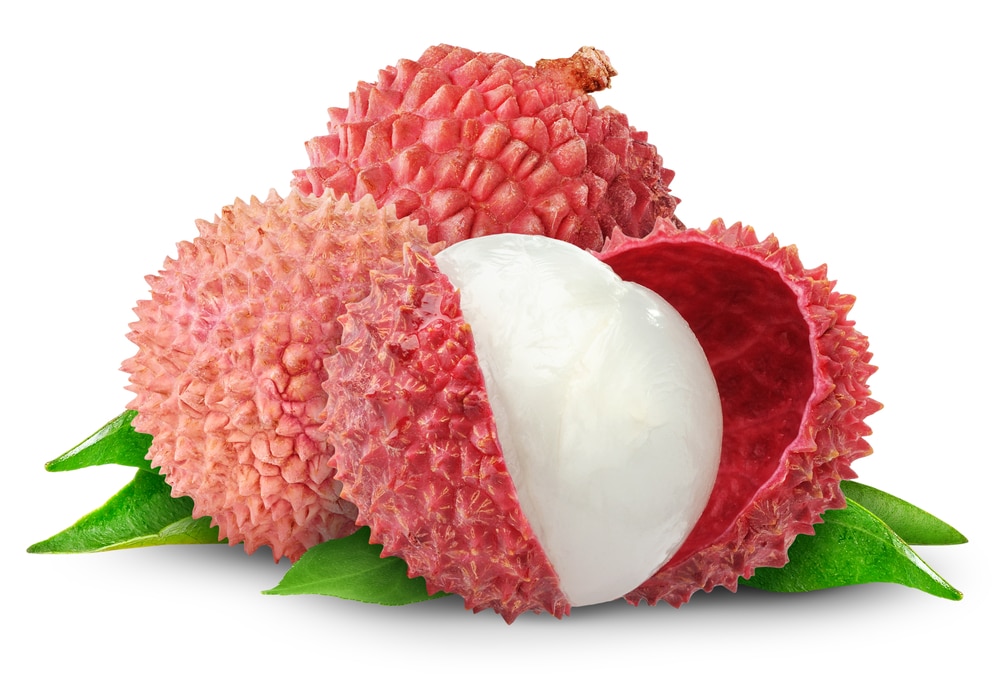 Jackfruit is my most recent favorite.  It grows in a big pod about the size of an American football and must be cut open with a knife.  Inside there are these yellowish fruits that have a soft melon-like texture, and a lightly sweet, almost caramel flavor.  I can literally eat Jackfruit all day long. Jackfruit grow on trees so harvesting them is challenging unless they happen to be growing close to the ground. Pitaya, or dragonfruit, is a strange pinkish fruit that is typically sliced.  Inside the flesh is either white or purple with tiny edible seeds.  The dragonfruit is a mild mix of tart and sweet and common at breakfast at many hotels, partly because it goes well with many dishes, keeps well cold and easy to slice.  Dragonfruit grows on cactus-like succulent vines and you will likely see locals growing them in their gardens on trellises alongside mangos and papayas.

Tamarind is a legume (so not exactly a fruit) but with a very sweet and woody flavor.  Also common across Latin America, tamarind is used as a flavor to sweeten up dishes, and even as a candy flavor.  The taste is pretty strong when you eat the fruit straight, so that also probably influences why it is used more for flavoring than as a raw product.

Custard apple have a very mild flavor and I have seen some Thais putting salt on them.  They have a bit of a sour but not exactly a tart, taste.

Rose apples have a very refreshing, light taste and can be eaten as is, skin and all.  Rose apples do not have a very strong taste and are often served sliced with a sprinkle of spiced sugar with or without some chili pepper seasoning to give it that extra kick.

Pomelos are larger than life citrus fruits, bigger than a grapefruit but sweeter. Pomelos are easy to peel once you get through the really thick peel.

Sapodillas have a texture similar to a pear, with a bit of grit in the flesh of the fruit.  They are typically peeled and do have a few seeds similar to a pear or apple. The taste is mildly sweet and dark in flavor in a very dessert-like way.

Salak fruit, or snake fruit based on the strange outer texture, has a funky tangy flavor that also has a nut-like quality.  You have to peel it and although they are small, the flavor is powerful. These also have seeds that cannot be eaten, but good news is that it is perfectly acceptable to spit out the seeds while eating according to local culture.

You have probably tried or at least seen Mangos and Papayas.  These fruits are staples and prepared in interesting ways.  One favorite dessert is Mango Sticky Rice. The dish is typically presented cold with sweet condensed milk poured over the whole dish like this- 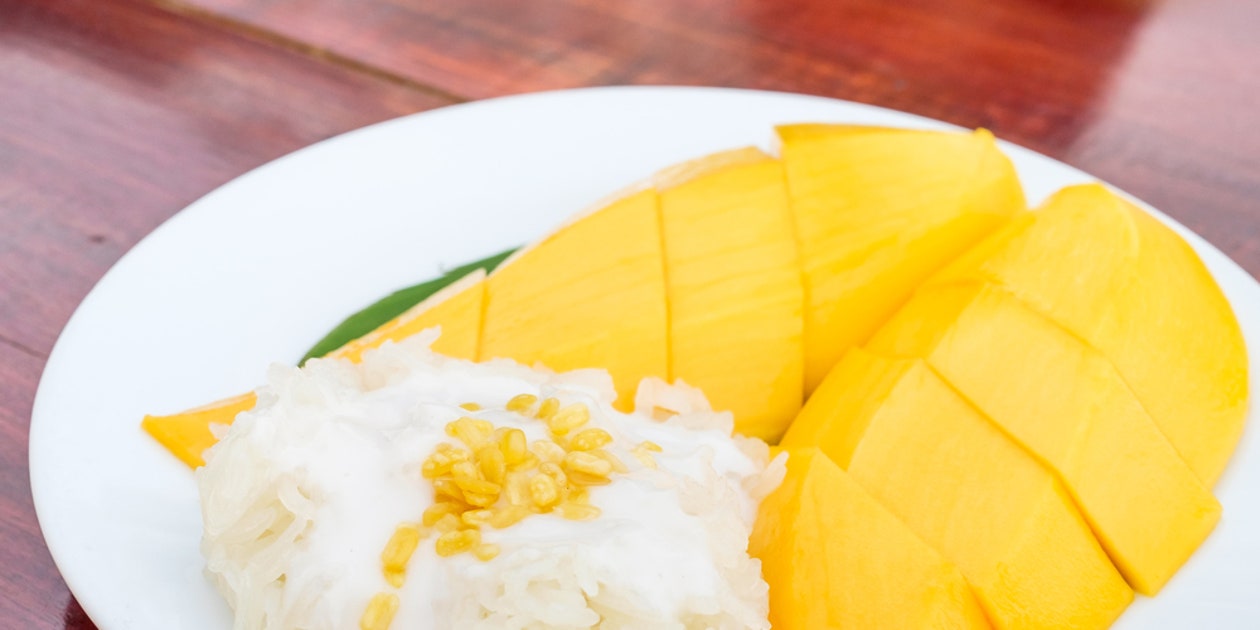 In addition to eating ripe papaya sliced in a manner similar to melon/cantelope, unripened green papaya is also the main ingredient for a staple dish in Thailand. Spicy Papaya Salad is a complex dish that uses a combination of lime juice, dried shrimp, fish sauce, chili peppers, tomatoes, and of course shredded shavings of green papaya, which give a carrot-like quality.  Don’t knock it til you try it as it is a fantastic flavor and a great way to clear out the sinuses. It looks like this.

Durian is probably the most controversial fruits in SE Asia. (yes, fruit can be controversial).  Durian has a melon-like flavor that is very mild and barely sweet. The taste is not what makes it controversial, the smell is.  It is banned in many public areas due to it’s strong, pungent smell.  I liken the smell of a ripened durian to the smell of a dumpster, or compost pile.  The fruit is a staple in rural areas but modern Thais are split due to the smell it emits, which can be particularly off-putting to tourists with sensitive noses. Here is what a durian looks like- 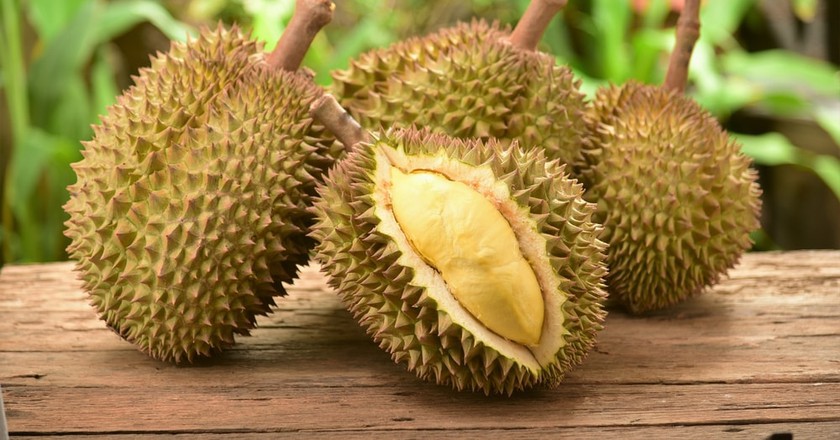 Southeast Asia is certainly a culinary hub. Thailand is known for its unique and diverse cuisine and Thais take pride in their ability to adapt various influences into a style that is uniquely Thai. If you have not really taken a foray into Thai cuisine, it is probably a good idea to stop by one of the many great Thai restaurants in the Richmond area. Look for dishes with typical ingredients like coconut milk, lime, noodles, rice, vegetables like peppers, eggplant and peanuts.  One key ingredient that is in most Thai dishes in Thailand, but missing in many American Thai restaurants, is fish sauce. (more on that to come)

Thai cooking class is a tourist go-to activity and cooking in Thai culture has a spiritual and philosophical flavor.  Thai food centers around concepts like balance, and cooks should be aware of balancing sweet and savory, spicy and cool, mild and strong flavors. 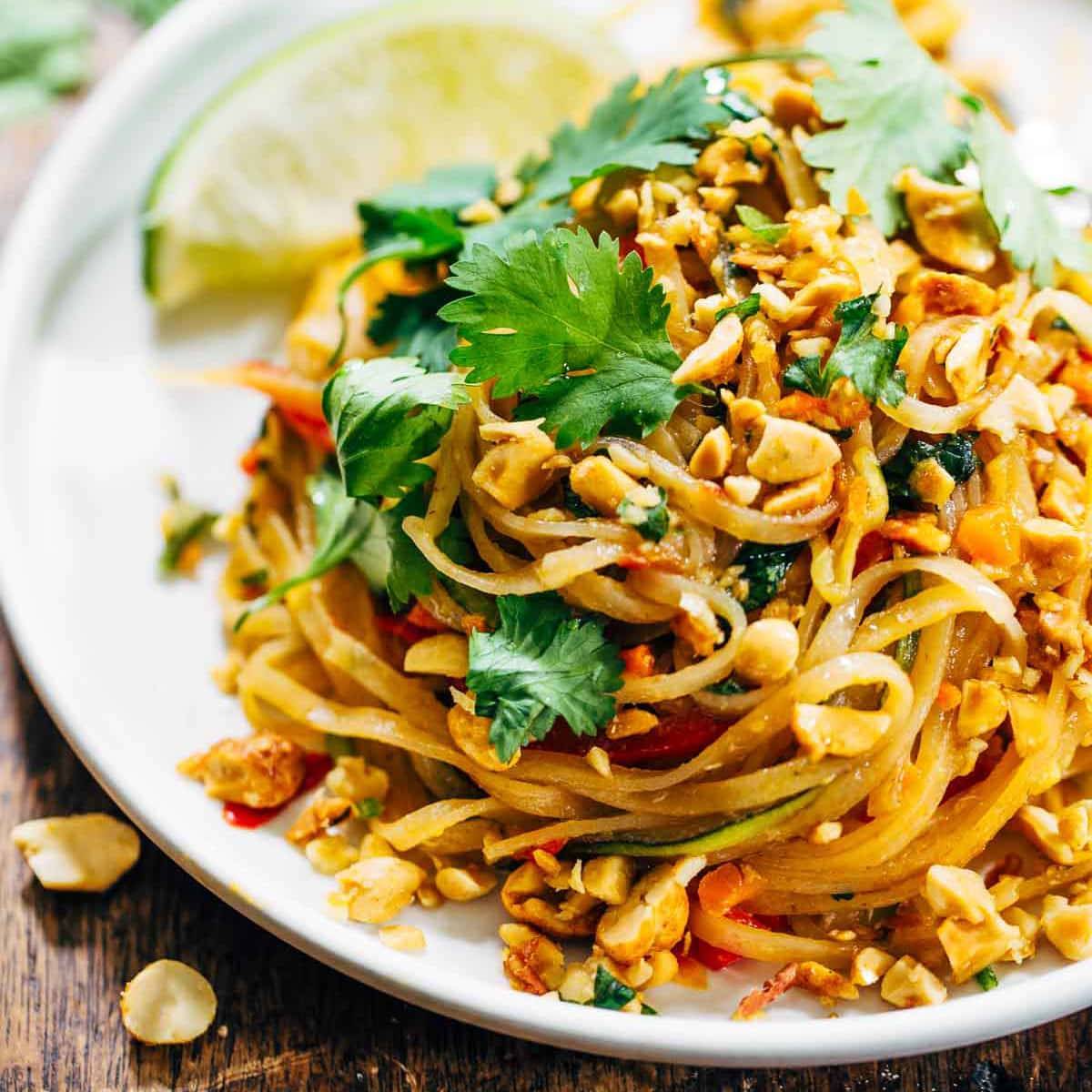 In addition to Pad Thai, there are countless other noodle dishes that combine a variety of meats, veggies and spices in interesting ways. The word Pad is Thai for stir fried starts the name for most stir fried rice and noodle dishes.

Soup- Tom Yum is sometimes hearty enough as a full meal in many restaurants. Spicy, tangy and full of veggies and meats, it is certainly a treat for the taste buds.

Tom Ka soup is a milder soup for those who prefer less spice (although, like all Thai dishes, you can certainly spice it up).  It is made with a base of coconut milk and lime juice and is both tropical and refreshing. 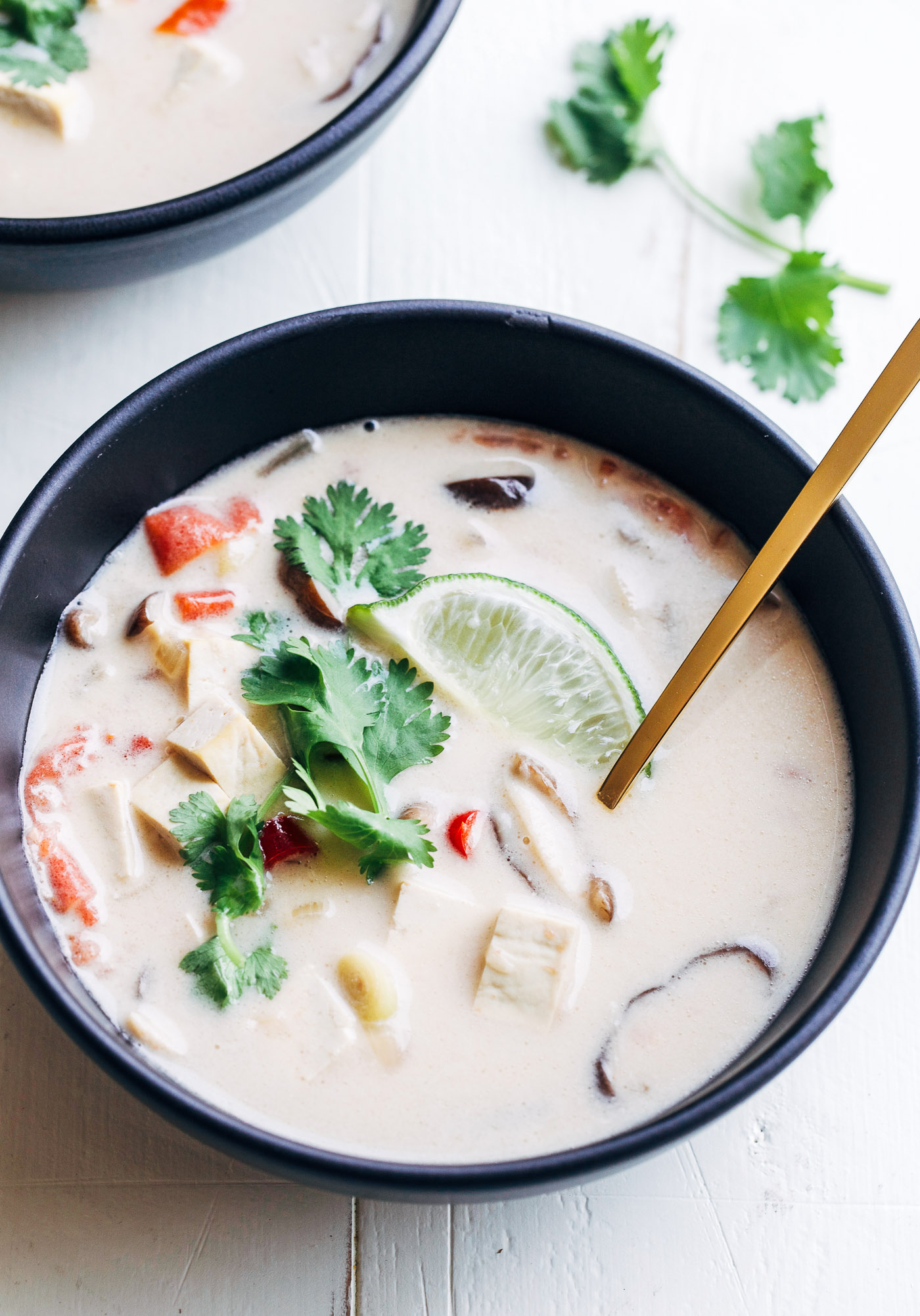 Curries- Although curry is most often associated with the Indian Subcontinent, Thai cuisine has important the Indian staple and made it uniquely Thai.  Red, Yellow and Green Curries of available in most restaurants. Usually served with a side of rice and spiced to order, curries in Thailand often have unique veggies like Thai and Pea Eggplant which you can’t find in the local Virginia grocery stores. 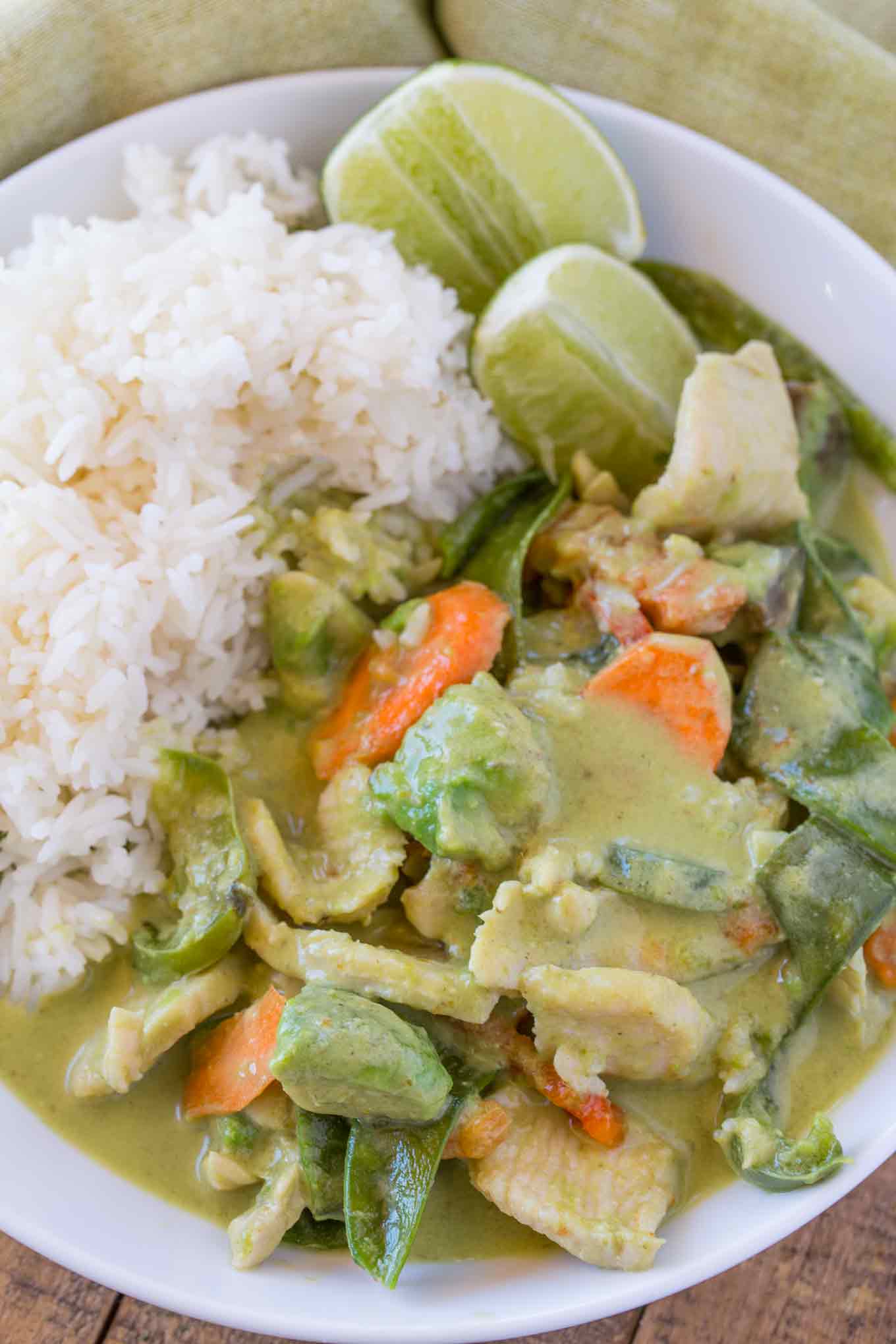 Although in the same region of the world, Cambodian cuisine is markedly different from Thai cuisine, with a few similarities.  For one, Cambodian food is not nearly as spicy.  Grilled meats and veggies on skewers are popular at roadside food stands. 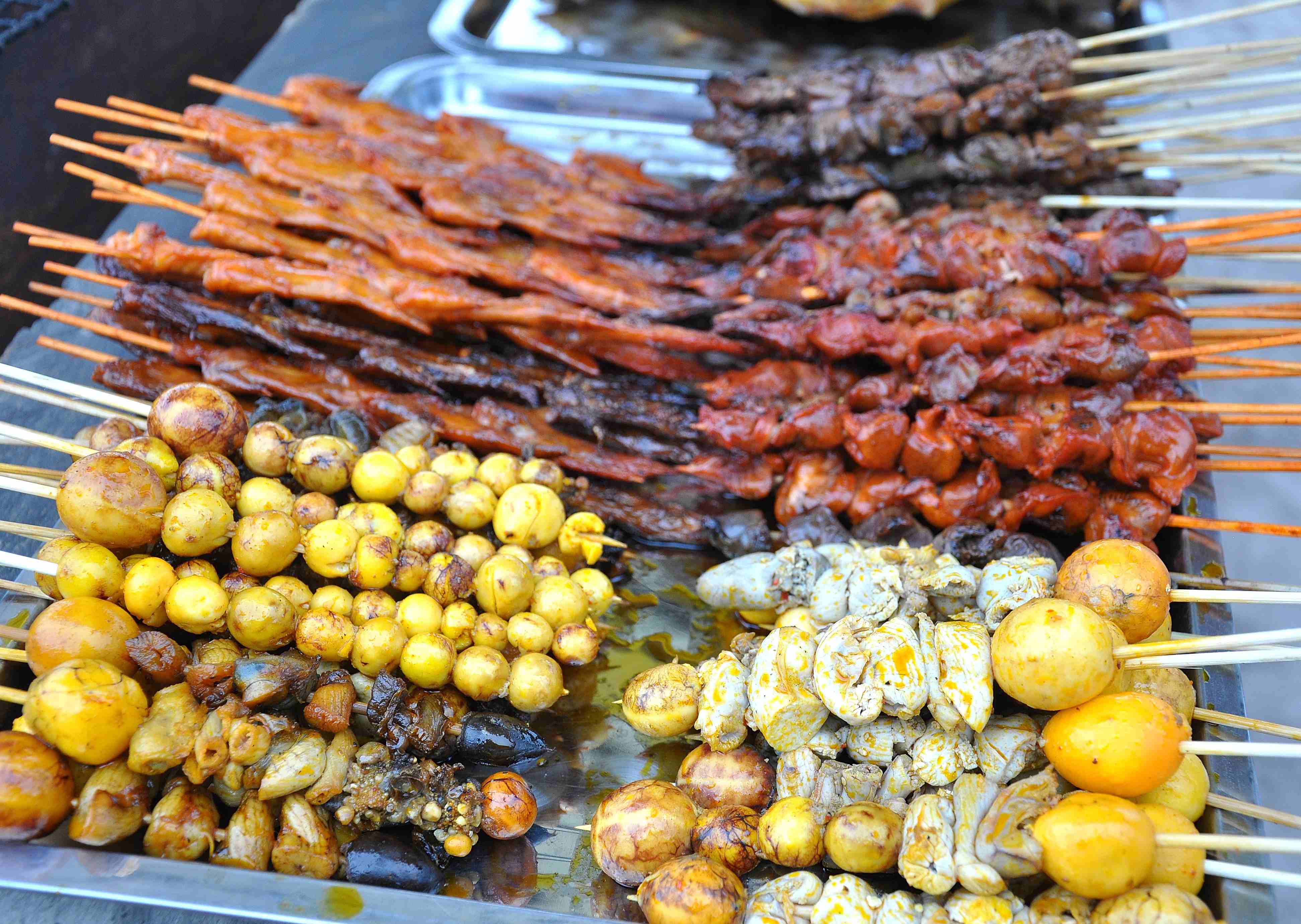 One of my favorite dishes is Lok Lak, which is typically ground beef or pork, mixed with spices and lots of lime juice. It is usually served with lettuce and other veggies to make a sort of lettuce wrap.  It also often comes with a lime- based dipping sauce that has salt and spices. 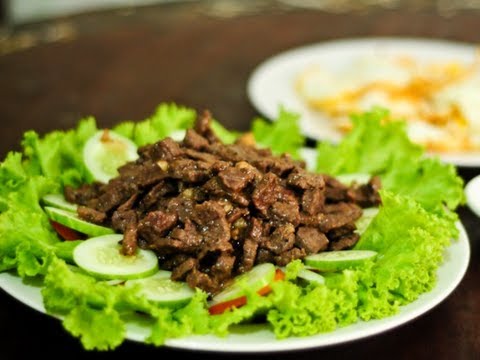 Fish Amok is the national dish of Cambodia and is served in a bowl or in banana leaves. It is somewhere between a fish paste, stew and pastry depending on how it is cooked.  It is not particularly spicy in terms of heat, but has a strong fish flavor that can be a bit of an acquired taste. 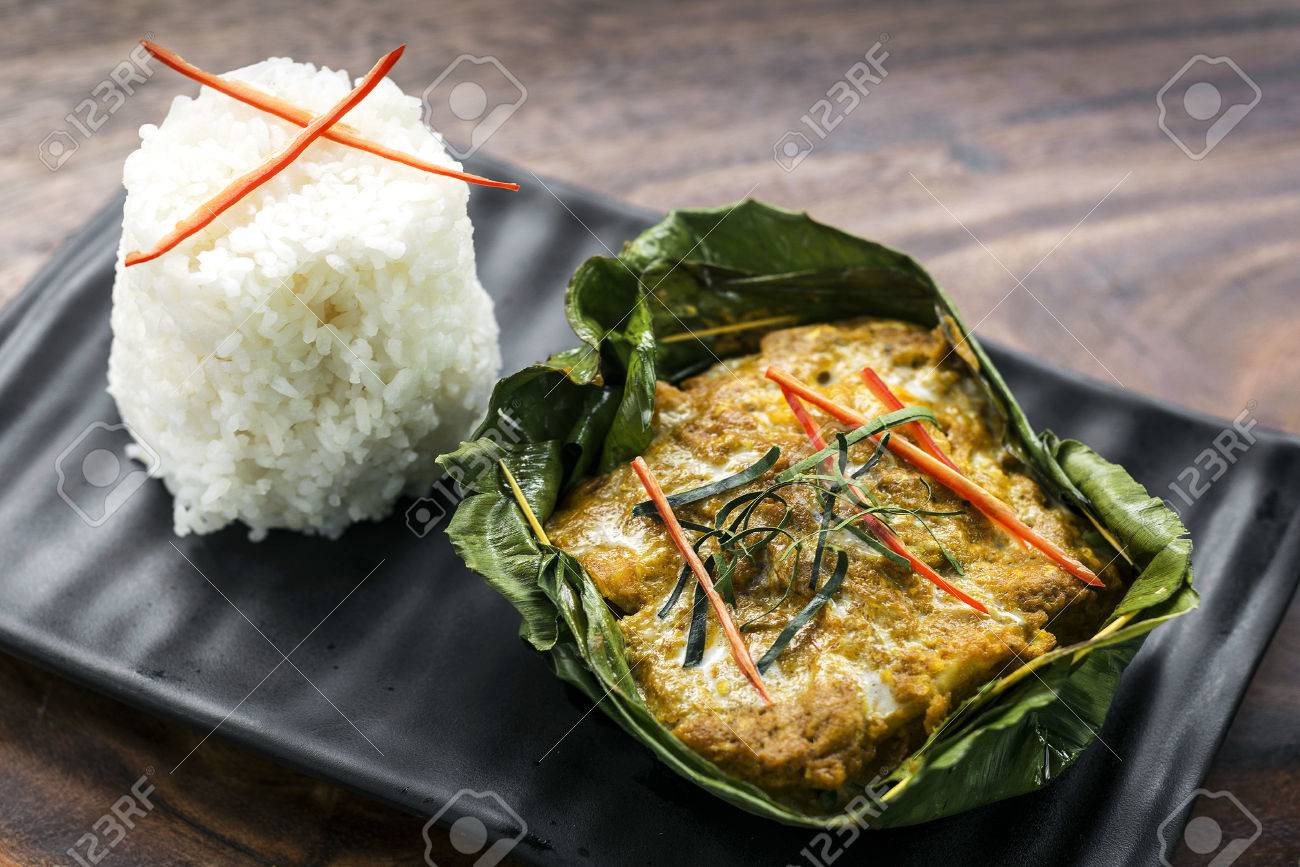 Cambodia was colonized by the French earlier in the 20th century and you can still sense a French influence. For one, there are plenty of pastries and breads.

Also, omelettes and crepes abound, and many rice dishes come topped with a fried egg.

My favorite dining experience in Cambodia, by far, is Khmer Barbecue.  Similar to Korean BBQ, diners are given a metal cooking surface with hot coals underneath.  Around the outer ring of the metal pan is an area that is filled with water, veggies, noodles and egg to create a soup.  Then diners place thinly sliced raw meats and seafood on the top of the metal pan to sear and smoke until you are ready to eat it.  Everyone continues to fill the soup area and restock the metal cooking surface until the whole group is full. Some of the thinly sliced meats include beef, pork, chicken and they are usually pretty fatty cuts so that they get really crispy.  In terms of seafood, shrimp, scallops and squid are easy to cook and only take a few minutes from raw to well-done.

In Thailand and Cambodia, although poverty is rampant in areas, it is less common for people to go hungry.  One of the reasons is that food is plentiful in forms that might be challenging for the western palette. Locusts, grasshoppers and crickets are among the most common insects cooked in hot oil.  These insects are full of protein and if you are a bit daring, you might be surprised that they have a mild, almost non-existent taste.  I liken them to deep-fried, crunchy leaves. In Thailand, the more adventurous eater might want to try scorpion.

If you are looking for little less crunchy and a little more the consistency of smooth cornmeal, try a variety of worms and grubs. 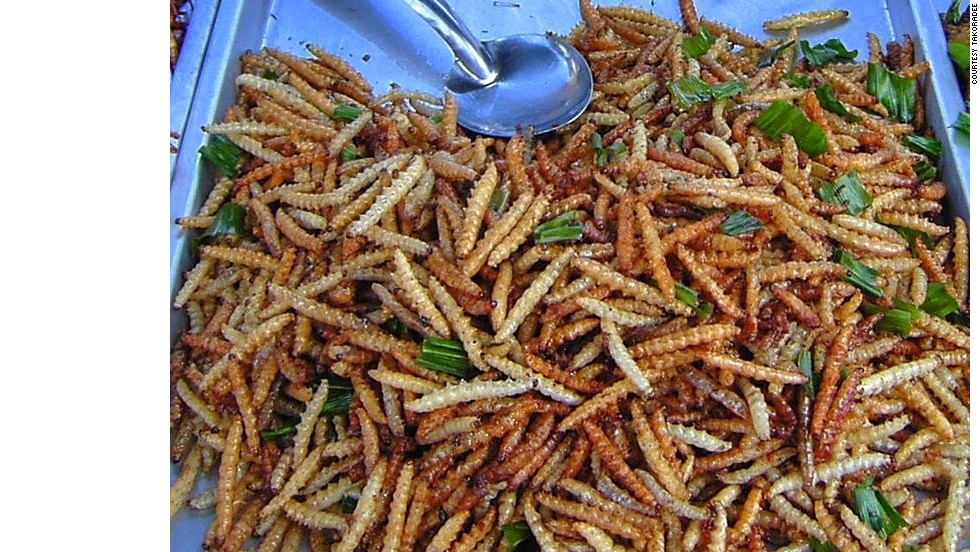 Not for the faint of heart, they are nutritious and inexpensive.  Typically, a big bag with a kilo’s worth of insects runs you less than a dollar.  One thing that an observer may notice is that insects are a common snack for rural people and the working class and less so among the urban business people of Bangkok.  So, if you are interested in trying them, do so without making fun of those who sell and eat these foods on a daily basis.  Although the vendors on the streets do expect foreigners to be a bit exaggerated in their reactions, careful not to do so in a condescending manner.