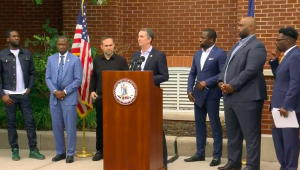 One of the clients at the Warrenton Public Defenders, Mr. M, a big guy in his 50s, broke into tears when his attorney explained to him that per the most recent legislative change, he may not have to go back to jail for his most recent probation violation. Mr. M served one-year in prison for a drug possession charge, still had two-and-a-half years suspended prison time and was almost done with his two-year probation until he missed a court hearing. He did not have means of transportation that day, and he did try to contact his probation officer and the court clerk but still ended up being violated on his probation because of the Failure to Appear. Mr. M could have been re-sentenced to all his two-and-a-half years of suspended prison time, plus extra time for the probation violation and Failure to Appear, despite his general good behavior in prison and during probation.

Virginia took the first step reforming its probation system by passing HB 2038 earlier this year, and its impact is unclear. The probation system, although originally set up as an alternative to extended periods of incarceration and intended to help people transition from incarceration to the community and keep people out of prison, has been gathering criticism over the years. Court-ordered probation, on many occasions, fails to help. In 2019, the Council of State Governments Justice Center conducted a study and found out that in Virginia, more than half of prison admissions are due to supervision violations, costing the state $309 million every year [1]. About 38% of the Virginia prison population on any given day (11,239 people) are incarcerated due to a supervision violation [2].  Every year in Virginia, about a quarter of all persons under probation or parole successfully complete their period of supervision and are released [3]. The rest, the persons struggling with substance abuse and/or mental illness, the persons with low education level and inadequate employment skills, the persons without a reliable housing option, are on a “parol-to-prison merry-go-around.[4]”

Until this July, Virginia was one of the states that did not have a limit for probation sentences. The new bill, HB 2038, poses maximum sentences for adult probation sentences (one year for misdemeanor, five years for felony) [5]. The new law also makes it more difficult to send people back to prison for first-and-second-time technical violations such as missing a meeting with a probation officer, failure to maintain a job or report a job or address change, and failing a drug screen [6].

How much impact this change is going to have in the probation system remains a question. On the one hand, judges throughout Virginia have been taken the legislative change into consideration even before the law officially went into effect in July. There are numerous examples in General District Courts where judges were following the one-year and five-year limits since early April. On the other hand, judges still have a lot of discretion. The bill only limits sentences for first and second technical violation, and judges can “impose whatever sentence might have been originally imposed for a third or subsequent technical violation [7].” As Governor Northam stated, the current probation system could be “focus(ing) too much on punishment, and too little on grace for people trying to do the right thing … It makes it harder for people who are trying to rebuild their lives and take advantage of the second chance they have, to make better choices.[8]” As a matter of fact, there are judges with a tendency to punish. Even after the legalization of recreational use of marijuana, judges are still handing out “no marijuana” as a probation restriction for not drug-related cases. Probation could, even with the new legislative change, still be utilized as an excuse to disproportionately punish people who may already be struggling.

[1] Confined and Costly: How Supervision Violations are Filling Prisons and Burdening Budgets, The Council of State Governments (Jun. 18, 2019), https://csgjusticecenter.org/publications/confined-costly/.