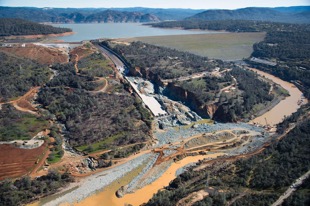 Of all the challenges facing our country today, it is my opinion that there is no greater threat to our economy and national security than America’s infrastructure. Yet, it has gone almost unnoticed by mainstream politics and the public for decades.

In many ways, the Oroville Dam in northern California exemplifies the general condition of the rest of the nation’s infrastructure: over fifty years old and failing.[1] The dam, not a backwater levee of little consequence but rather the tallest dam in the country, holds back a reservoir critical to the entire region’s economy and environmental health.[2] In 2017, the dam’s primary spillway crumbled after decades of unchecked erosion, forcing the evacuation of nearly 200,000 area residents as uncontrolled flood waters gushed from the dam.[3]

The Oroville crisis serves as a reminder of what happens when complacency is the status quo. It is just one of thousands of projects in the United States in desperate need of repair or replacement. Consequently, it was no surprise when in 2017 the American Society of Civil Engineers (“ASCE”) once again gave the nation’s infrastructure a D+ rating.[4] The report was not all doom and gloom, with some areas like wastewater treatment and railways receiving improved ratings.[5] However, many critical sectors experienced further stagnation or decline, like public transit, airports, energy, drinking water, and roadways.[6] These declines are accelerating in part from climate change, as higher temperatures, rising sea levels and frequent inland flooding take their toll on the country’s aging public structures.[7]

The true scale of the issue is hard to comprehend, and its negative effects ripple throughout the American economy.[8] For example, trucking companies estimate they lose $60 billion a year due to delays caused by faulty bridges and highways.[9] Shipping companies lose billions every year transiting congested, century-old locks and canal systems, and ports struggling to keep pace with the larger cargo ships now coming through the Panama Canal.[10] The result? An inefficient American economy that is less competitive in today’s globalized market.[11] If it continues to go unaddressed, the ASCE estimates the U.S. economy will lose nearly $4 trillion in GDP by 2025 and 2.5 million jobs.[12]

Fortunately, infrastructure spending is a policy issue enjoying rare bipartisan support in Congress, although Democrats and Republicans diverge when on how the “big fix” will be funded.[13] One view, championed by President Trump’s proposal, is the use of public-private partnerships to tackle the infrastructure problem.[14] Under this structure, the federal government would put up some initial funding, but a majority would come from Wall Street’s investment in infrastructure projects.[15] To incentivize this, banks and large institutional investors would receive tax credits, effectively generating a form of cash flow like any other return on investment.[16] For the American public, this means the federal government will not need to impose major tax hikes to foot the bill, and spending would be put into more efficient hands.[17]

The Democratic candidates jockeying to challenge Donald Trump come November have outlined a different vision.[18] The proposals all state that any infrastructure overhaul will come predominantly from the federal funding, rather than relying on private investment.[19] They argue that the President’s proposal would force the states into entering into expensive public-private partnerships out of desperation without federal funding as an alternative.[20] Instead, funding would come from tax hikes, most likely by increasing the excise tax on gasoline, which has remained at 18.4 cents per gallon since 1993.[21] For Americans, this could mean a more equitable system for those communities that would struggle to attract private investment.

However the infrastructure overhaul ultimately comes into fruition, whether it be under this President or the next, politics must give way to common sense for the greater good of this country. Infrastructure spending is a major boon to the economy, and it can be used to great effect to stave off growing fears of stagnation or recession. Congress needs to cooperate, and get it done.

[18] Alexa Lopez, Where Do the 2020 Presidential Candidates Stand on Infrastructure?, ASCE (Jan. 24, 2020), https://www.infrastructurereportcard.org/where-do-the-2020-presidential-candidates-stand-on-infrastructure/.

[21] Alexa Lopez, Where Do the 2020 Presidential Candidates Stand on Infrastructure?, ASCE (Jan. 24, 2020), https://www.infrastructurereportcard.org/where-do-the-2020-presidential-candidates-stand-on-infrastructure/.